Home Archives Contact Us Subscribe Twitter Facebook Patently Mobile
Apple has won a Design Patent for their 2022 MacBook Air with M2 Chip and Display Notch in Hong Kong and more
In Spite of China's COVID Lockdown issues hurting iPhone 14 Shipments, Apple was still the top Smartphone Company in the World in Q4-22 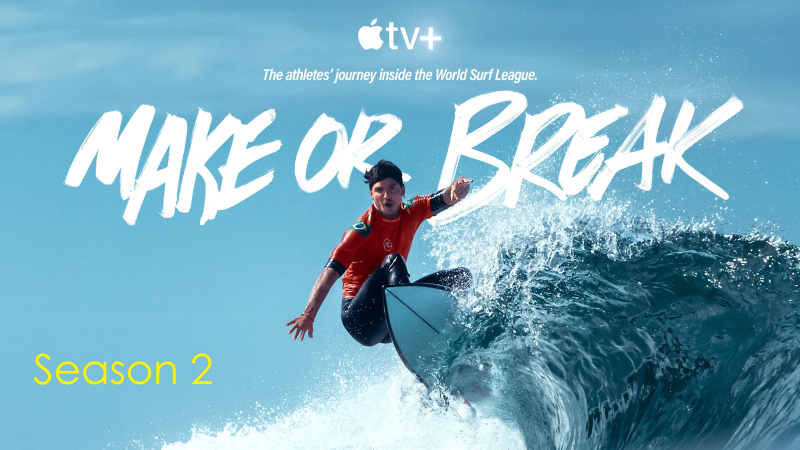 The highly anticipated second season of the acclaimed documentary series “Make or Break,” featuring behind-the-scenes access to the world’s best surfers as they battle for the top title at the World Surf League Championship Tour, is set to premiere with four episodes on Friday, February 17. An additional four episodes debut on Friday, February 24.

With unprecedented access, “Make or Break” returns to the world of professional surfing, offering an intimate deep dive into the aspirations, challenges, accomplishments and personal lives of the surfers who compete to remain on the elite Men's and Women's World Surf League Championship Tour. This season will take viewers on location for the 2022 competition season to stunning surf locations across the globe, capturing the highs and lows of the “Dream Tour,”  including the first-ever mid-season cut, international rivalries and record-breaking upsets.

Each episode in the eight-part season of the series spotlights internationally recognized surfers and will provide never-before-seen interviews.

Apple Studios has struck an exclusive overall deal with Dennis Lehane, the novelist, screenwriter and show runner who is best known for penning works such as “Mystic River” and “Shutter Island.” The pact with Lehane and his production company, Hans Bubby, comes on the heels of the Golden Globe-winning series “Black Bird,” a prison drama that Lehane helped create.

As part of the deal, Lehane will exclusively develop and produce a slate of original series for Apple TV+. The pact also gives Apple a first-look for digital features.

Apple TV+ is set to develop Lehane’s highly anticipated upcoming novel “Small Mercies” billed as an all-consuming tale of revenge, family love, festering hate, and insidious power, set against one of the most tumultuous episodes in Boston’s history. The book has been hailed as “thought provoking,” “engaging” and a “jaw-dropping thriller.”

The next project on Lehane’s slate is “Firebug,” with Hans Bubby partnering with much of the same producing team behind Black Bird. For more on this, read the full Variety report.

New cast member for upcoming series 'Presumed Innocent': Deadline is reporting that Bill Camp and Elizabeth Marvel have been tapped to star in the series. Camp and Marvel, who are married in real-life, will portray husband and wife Raymond Horgan and Lorraine Horgan in the series. Raymond Horgan was portrayed by Brian Dennehy in the 1990 film.

Raymond is Rusty’s (Gyllenhaal) boss, whose own career ambitions are threatened when Rusty is the prime suspect in their colleague’s murder.

Marvel’s Lorraine Horgan, Raymond’s wife, questions Rusty’s culpability. She becomes a sounding board for Rusty’s wife, Barbara (Negga), while the two families navigate an uncertain future. For more on this, read the full Deadline report.