Home Archives Contact Us Subscribe Twitter Facebook Patently Mobile
Apple TV+ announced 6 more shows Scheduled for the first half of 2023 that includes 'City on Fire,' 'Extrapolations,' 'Ted Lasso' Season 3+
An Apple Patent application published today reveals some of their work on fabricating microLED Displays for use in future devices

Apple patent covers keyless keyboards for MacBooks and other devices that offer morphing UI options for games, music and more 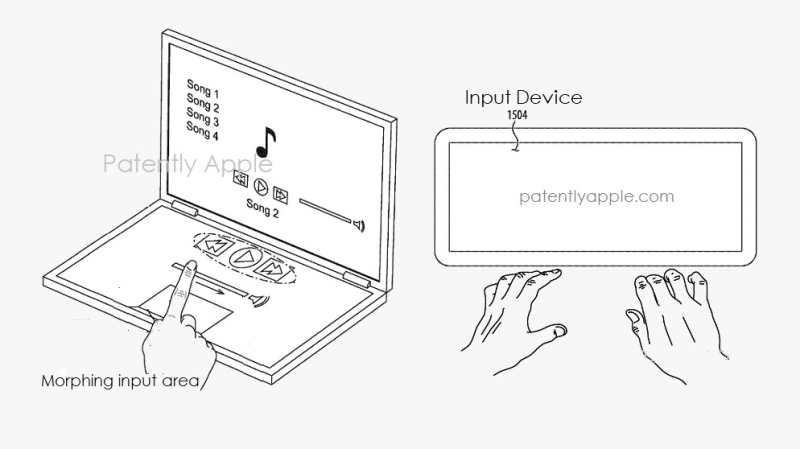 Today the US Patent & Trademark Office published a patent application from Apple that relates to force- and/or touch-sensitive input devices having haptic feedback. Alternative input devices, such as touch-input devices, appear to offer some greater flexibility for input scenarios and customization than mechanical keyboards, mice, and similar input devices.

Apple's patent relates to an input device that uses touch and/or force sensing to detect user inputs, and uses haptic outputs to provide feedback to a user. One example of such an input device is a keyboard that does not have mechanical or movable keys. Instead, the keyboard may have a flat, keyless input surface, such as a glass or metal layer, and may include touch and/or force sensing systems to determine when a user touches and/or presses on the surface.

Haptic actuators may provide physical feedback to indicate that a user has pressed the keyless surface with sufficient force to register an input. The haptic actuators may induce a physical sensation that is similar to or representative of a mechanical key. For example, when a user presses the surface of the keyboard with sufficient force, the surface may vibrate or otherwise move to indicate to the user that the intended input has been registered.

Apple's patent FIG. 14 below depicts an example process of detecting a key press; FIGS. 15A and 15B depict generation of input regions according to user interaction. Users will be able to choose a straight keyboard setup or one that is ergonomically laid out as shown in FIG. 15C. 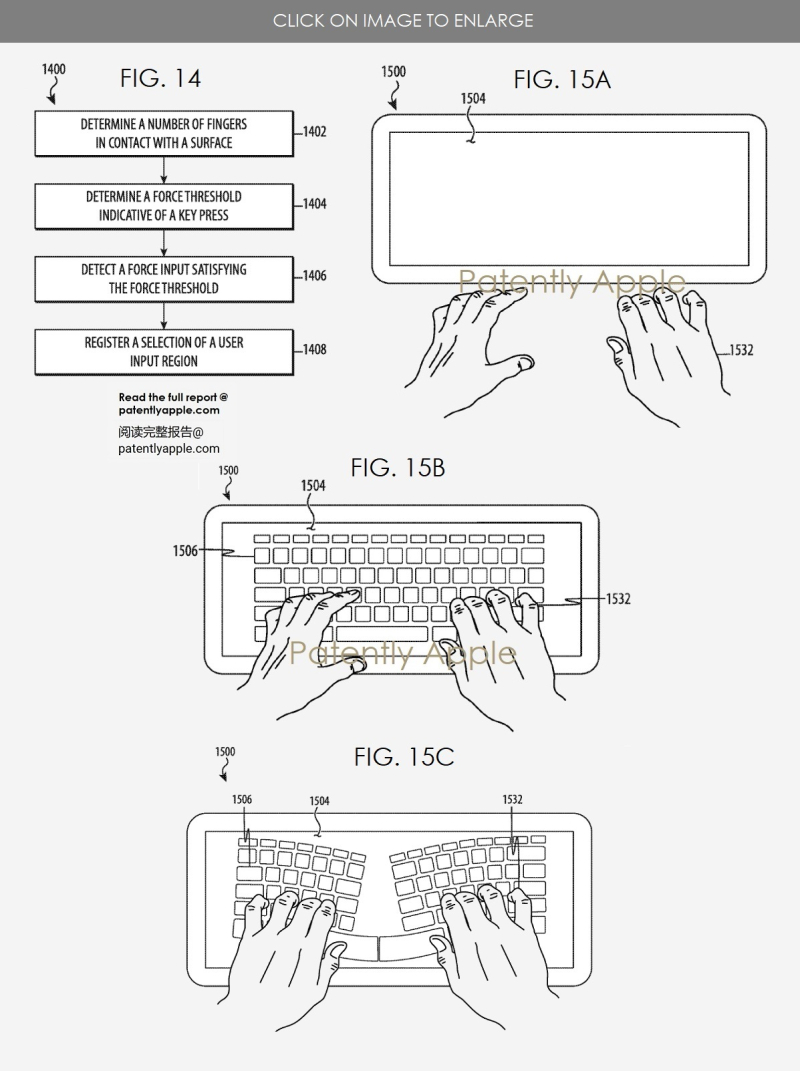 An input device that includes force sensing, haptic outputs, and an adaptive display may be used to define user interfaces other than traditional keyboards. Apple's patent FIG. 16 below depicts an example input device #1600 incorporated within a notebook or laptop computer in which an alternative user input is produced on an adaptive input surface #1604. The interface supports iTunes / Apple Music; FIG. 17 illustrates virtual keys and a virtual trackpad. While a browser is open on the MacBook, the virtual trackpad is moved higher than normal so as to make it easier to navigate. 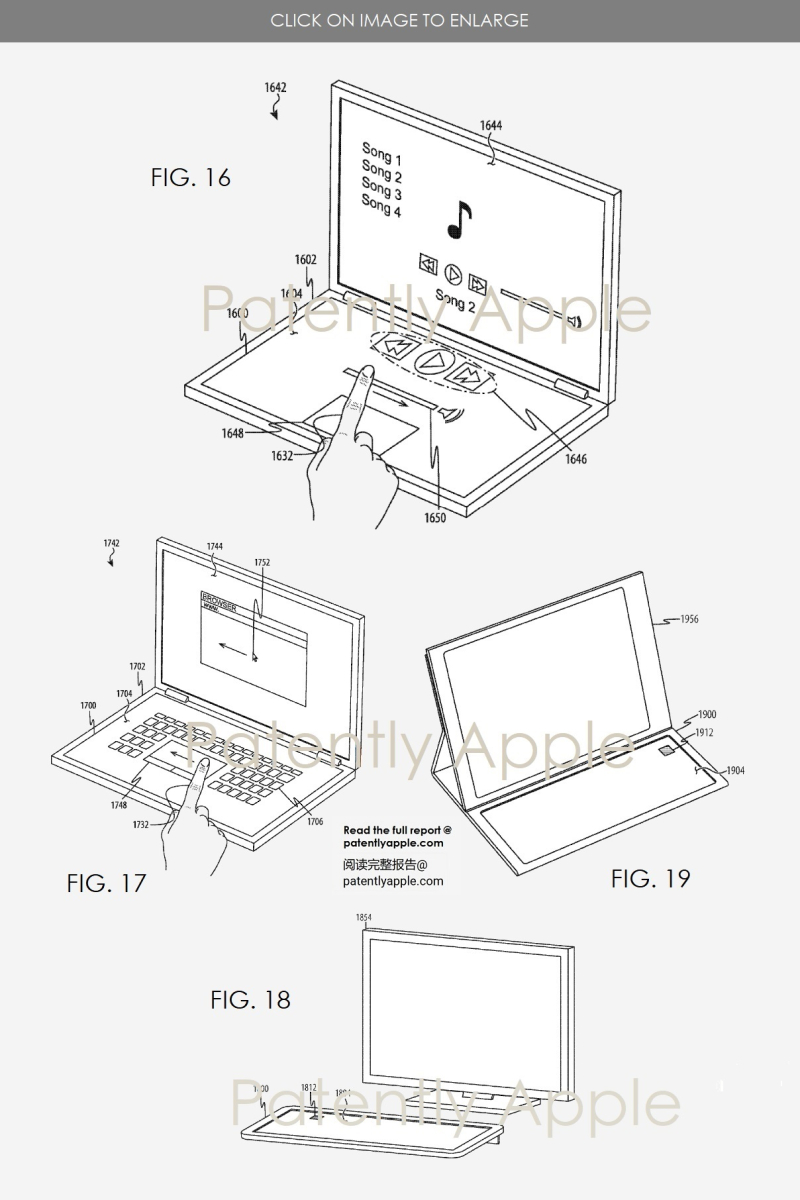 Apple's patent FIGS. 18-19 above depict example embodiments of input devices such as an iMac and iPad Pro.

Apple notes that FIG 6B below depicts an example haptic actuator #601 that may produce localized deformations or deflections of a cover display. Apple further notes that the haptic actuator may be configured to retract and/or extend (FIG. 6C) vertically (as illustrated above) to impart tactile outputs. 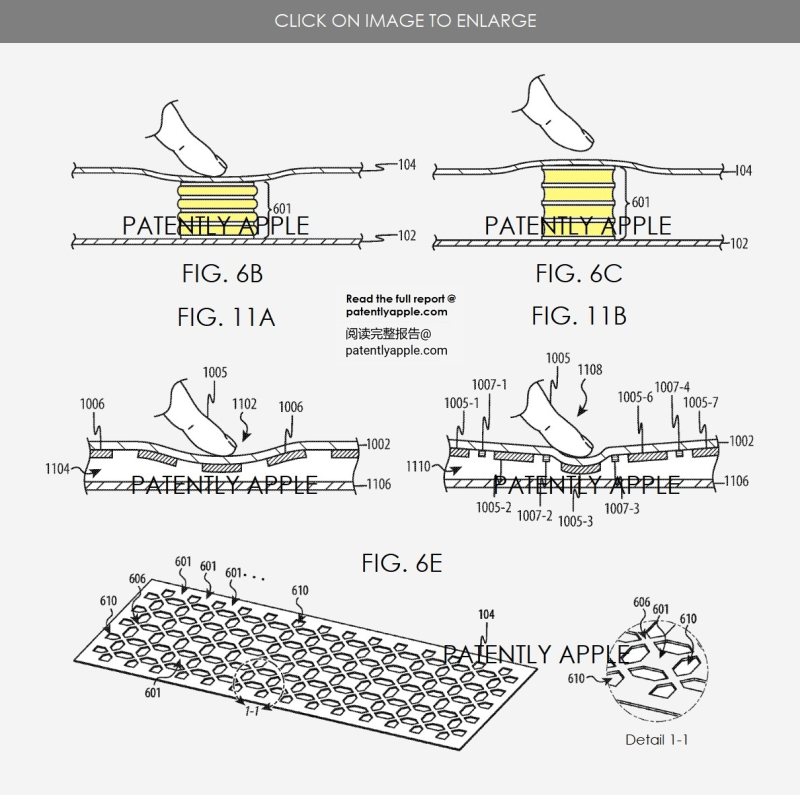 Apple's patent FIG. 6E above shows us another example arrangement of haptic actuators #601 relative to the cover. In this example, the haptic actuators may be formed from a single sheet or otherwise interconnected via one or more connecting elements #606.

Below are a few technical points that Apple confirms in their patent claims: