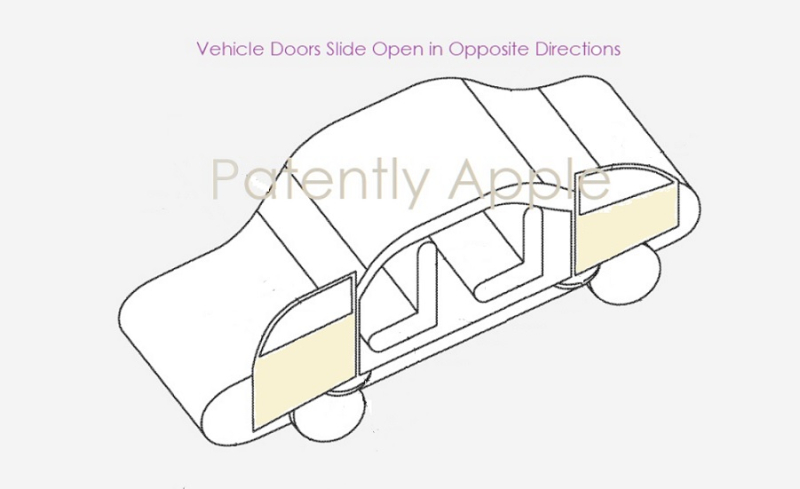 A year ago Patently Apple posted a Project Titan patent report about a futuristic multi-linkage vehicle door hinge. One year later and Apple has filed for two additional vehicle door patents with the U.S. Patent and Trademark Office. The first patents covers side sliding doors, unfolding sunroof and reinforced vehicle windows, while the second patent relates to a door latch system that includes a striker, actuator and controller.

Apple notes in their patent filing that future Autonomous vehicles won't have a driver which will allow the door system to differ from traditional hinge-centric doors of today. The doors may open and close by moving along the side of the vehicle providing an unobstructed opening on the side of the vehicle that will allow passengers to easily enter and exit the vehicle, just as the image from Fiat Chrysler below illustrates on their autonomous vehicle. 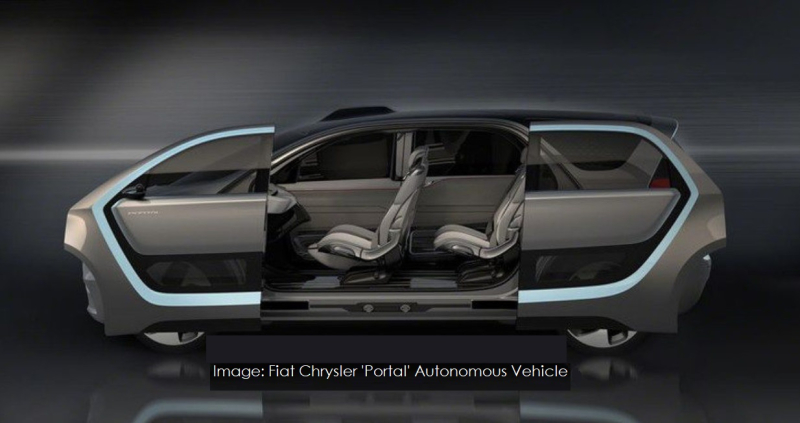 The door mechanism may be controlled by a door controller that receives sensor data from sensors in the vehicle. The door controller may determine how to move and position the door based on the sensor data and may issue corresponding control signals to actuators in the door mechanism to move and position the door accordingly. For example, the sensor data may include steering angle information that indicates an angle of a front tire and the front door may open at an angle relative to the side of the vehicle to accommodate the angled tire.

Apple's patent FIG. 1 illustrates the doors of the vehicle in the closed position and in FIG. 2 in the open position; FIG. 4 is a schematic diagram of an illustrative vehicle or other system with adaptively positioned doors. 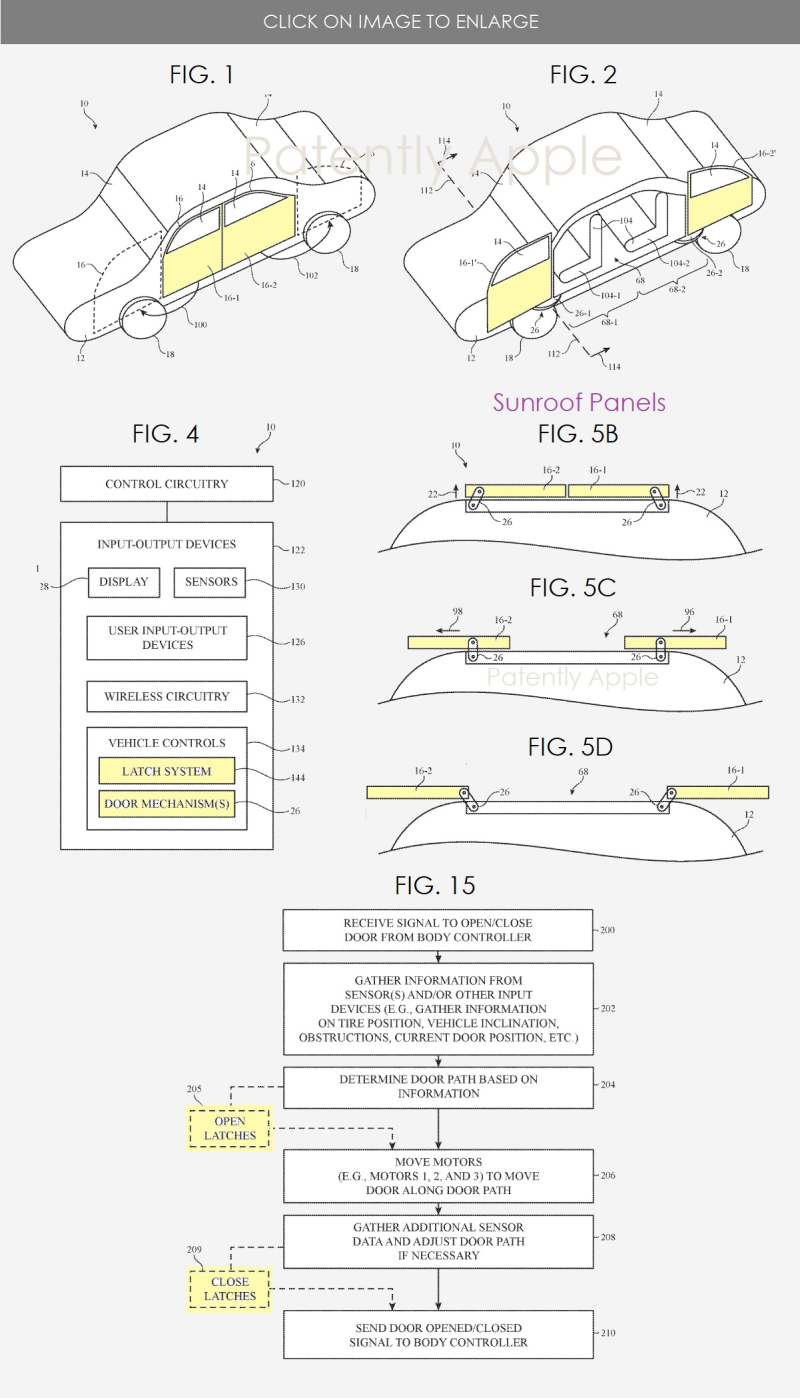 Apple's patent FIGS. 5B-5D above are top views of a portion of an illustrative vehicle showing how sunroof panels (or doors) can slide and or unfold to open and close; FIG. 15 is a flow chart of illustrative steps involved in opening and closing a door of a vehicle using adaptive positioning.

For more details, review Apple's patent application #US 20230008084 A1. A few of the inventors of this patent include:

Apple notes in their second Project Titan patent filed Thursday that vehicles, including passenger vehicles, include passenger and other compartments that are selectively openable by doors. The doors are movable relative to the vehicle and are further releasably coupleable to the vehicle with a door closure system. Typical door closure systems include a latch that is coupled to and positioned within a cavity of the door and a striker that is fixedly coupled to the vehicle and protrudes from a surface thereof. As the door is closed, the latch receives and releasably couples to the striker. 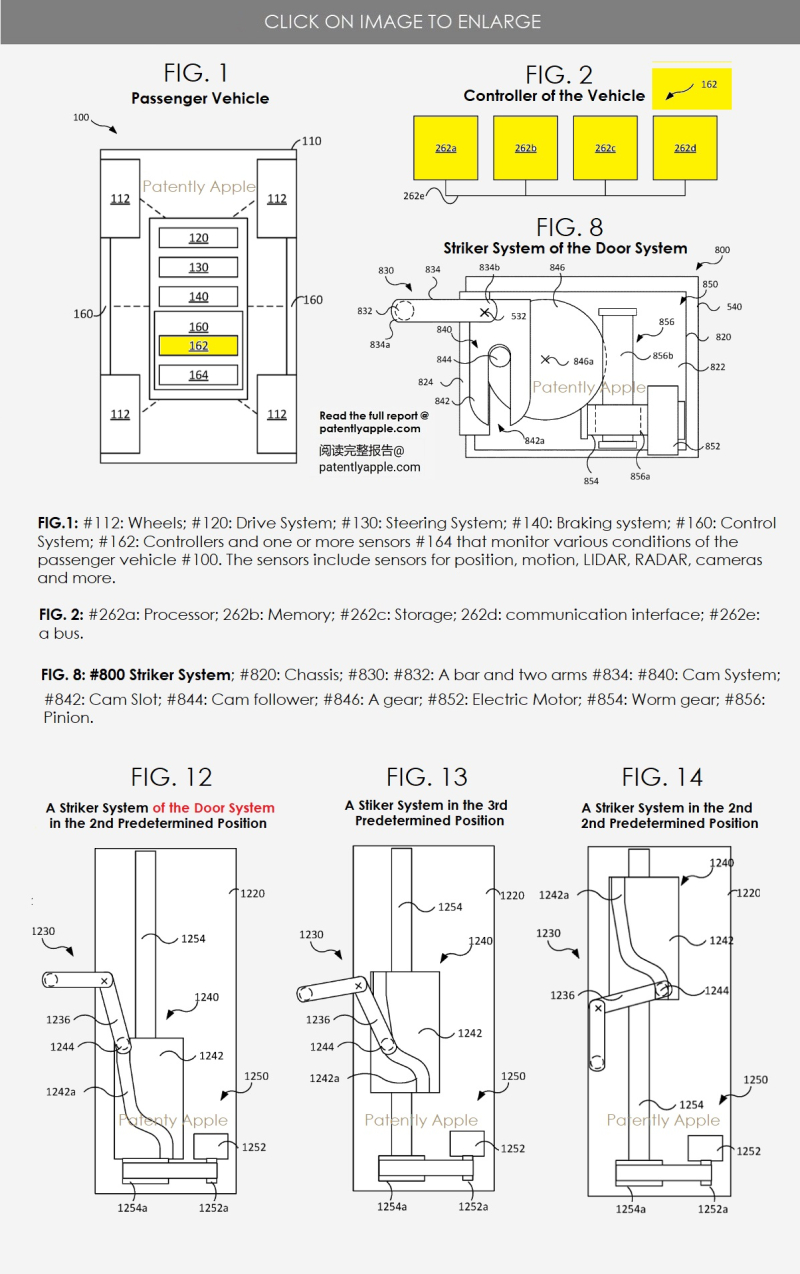