Home Archives Contact Us Subscribe Twitter Facebook Patently Mobile
Storm Clouds that have been Forming for years over Apple and Google as Gatekeepers in Europe and the U.S. is now Gathering Steam
This was a huge week in Apple IP news with 9 Registered Trademark Certificates Granted covering processors M1 and A15 Bionic & more

Widespread COVID-19 Lockdowns across China including Shanghai, where Apple's MacBooks are made, have Ignited Massive Protests 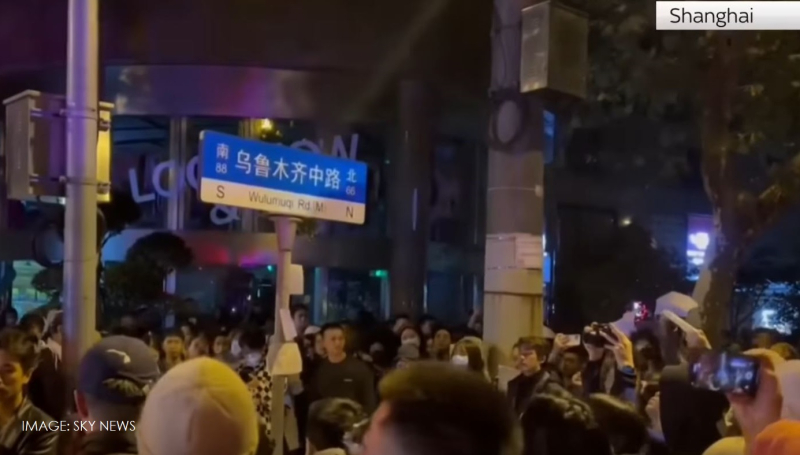 Back in March, Patently Apple posted a report titled "Workers at the MacBook Maker Quanta Plant Clashed with Plant Guards obeying COVID-19 Restrictions." Today, news of widespread protests over severe COVID-19 lockdowns across China, including Shanghai, have erupted. Whether the lockdowns will affect MacBook shipments again is unknown at this time.

According to a new AP report today, Protesters have been pushed to the brink by China’s strict COVID measures in Shanghai called for the removal of the country’s all-powerful leader and clashed with police Sunday as crowds took to the streets in several cities in an astounding challenge to the government.

Police forcibly cleared the demonstrators in China’s financial capital who called for Xi Jinping’s resignation and the end of the Chinese Communist Party’s rule — but hours later people rallied again in the same spot, and social media reports indicated protests also spread to at least seven other cities, including the capital of Beijing, and dozens of university campuses.

Largescale protests are exceedingly rare in China, where public expressions of dissent are routinely stifled — but a direct rebuke of Xi, the country’s most powerful leader in decades, is extraordinary.

Three years after the virus first emerged, China is the only major country still trying to stop transmission of COVID-19 — a “zero COVID” policy that regularly sees millions of people confined to their homes for weeks at a time and requires near-constant testing. The measures were originally widely accepted for minimizing deaths while other countries suffered devastating wavs of infections, but that consensus has begun to fray in recent weeks.

Then on Friday, 10 people died in a fire in an apartment building, and many believe their rescue was delayed because of excessive lockdown measures. That sparked a weekend of protests, as the Chinese public’s ability to tolerate the harsh measures has apparently reached breaking point.

Hundreds of demonstrators gathered late Saturday in Shanghai, which experienced a devastating lockdown in the spring in which people struggled to secure groceries and medicines and were forcefully taken into centralized quarantine."

In Beijing, students at the nation’s top college, Tsinghua University, held a demonstration Sunday afternoon in front of one of the school’s cafeterias. Three young women stood there initially with a simple message of condolence for the victims of the Urumqi apartment fire, according to a witness, who refused to be named out of fear of retribution, and images of the protest the AP has seen. Students shouted, “freedom of speech” and sang the Internationale, the socialist anthem. For more, read the full AP report here.

Apple now has a team on the ground at Foxconn's iPhone plant in Zhengzhou China to calm down the COVID-19 shutdown there that led to a massive protest. The new protests emerging across China are bound to put even more pressure on shipments of other Apple products including MacBooks if the lockdown orders stay in place for any length of time.