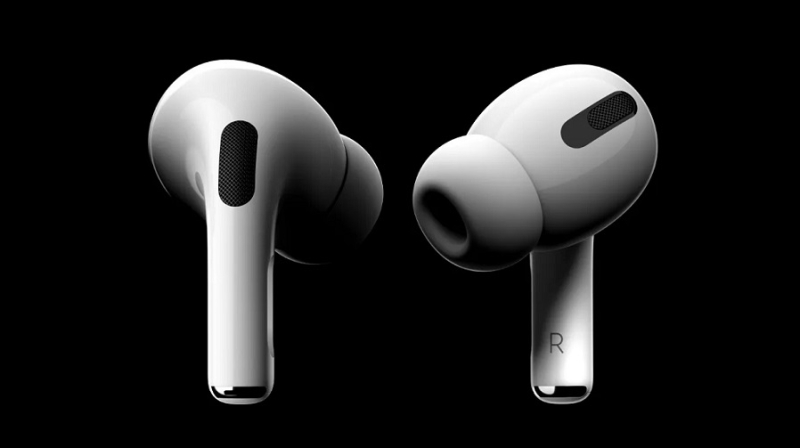 Yesterday the U.S. Patent and Trademark Office officially published a series of 53 newly granted patents for Apple Inc. In this particular report we cover Apple's invention relating to replacing the mesh on AirPods when their too clogged to clean. A second AirPods granted patent covers an invention that will extend today's Apple Watch 'Noise App' to AirPods where monitoring noise will be better appreciated as a health monitoring app. Our report covers two Apple Watch design patents, and as always, we wrap up this week's granted patent report with our traditional listing of the remaining granted patents that were issued to Apple this week.

Apple was granted a patent yesterday titled "Replaceable Mesh in Portable Electronic Devices." Apple notes that in general, portable listening devices typically include a mesh covering disposed over the audio openings, such as those described above, to protect the speaker and/or the microphone. The mesh can prevent dust, debris, and other foreign objects from reaching sensitive components of the speaker and microphone, such as the speaker diaphragm or microphone membrane.

The replaceable assembly can be removably coupled to the permanent assembly by one or more magnets. 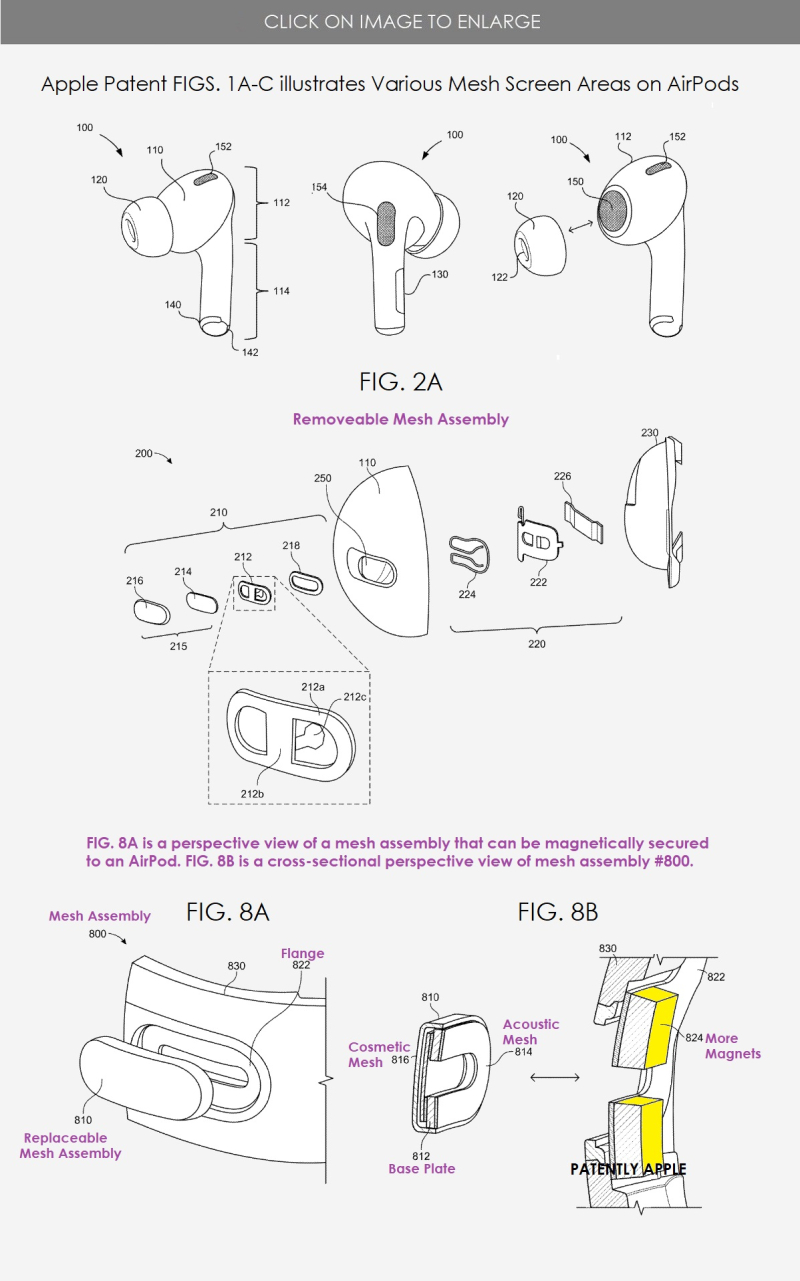 Apple's patent FIG. 8A above is a perspective view of a mesh assembly #800 that can be magnetically secured to AirPods. The permanent assembly (#830) can include a flange #822 and one or more magnets #824. The flange can couple the permanent assembly to an acoustic housing (as shown in FIGS. 8A or 8B) or, in other embodiments, directly to the housing of an earphone.

The magnets can be adhesively secured to the flange and positioned to magnetically couple with base plate #812 when replaceable assembly #810 is positioned within the opening. The magnets can be selected to generate a sufficiently strong magnetic field to secure base plate during normal operation and during a drop event or similar impact event while still enabling the replaceable assembly to be removed from the earphone when replacement is desired.

Apple's patent FIGS. 14A and 14B below are simplified cross-sectional views of the replaceable mesh assembly; FIG. 10C is a simplified exploded view of a multi-layer snorkel mesh that can be included in AirPods. 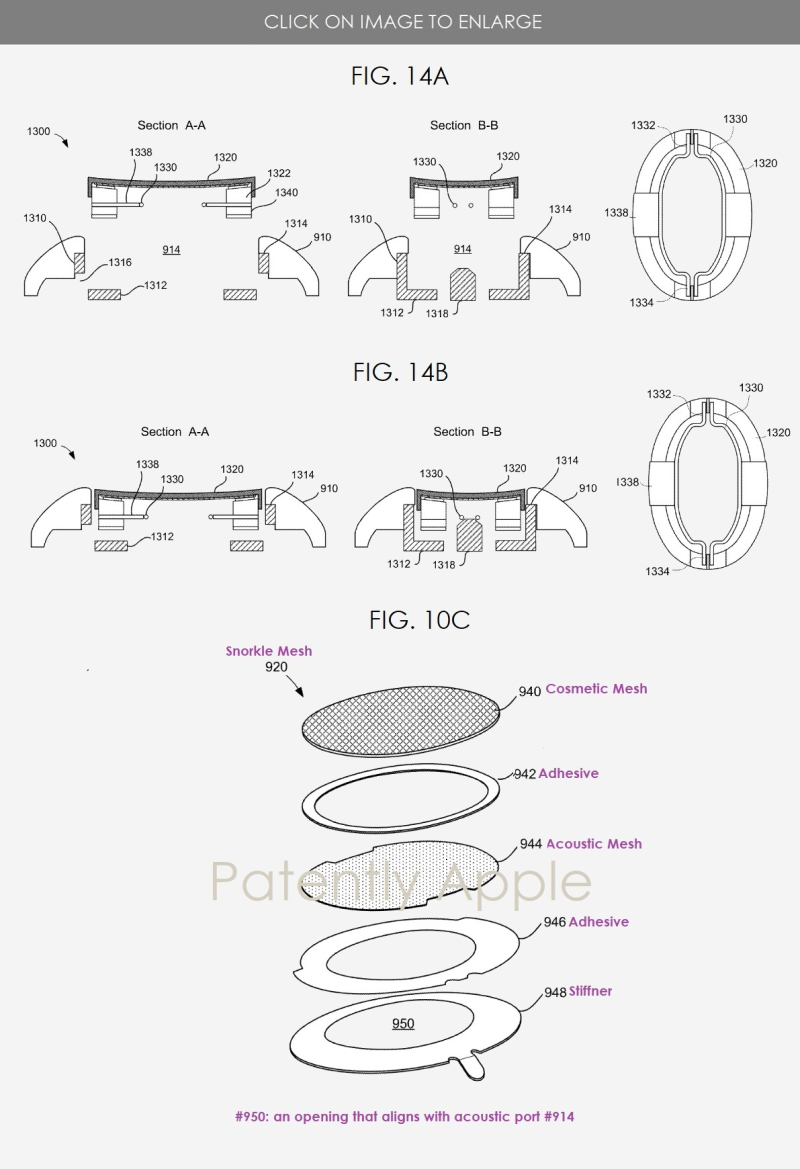 Apple introduced the Apple Watch "Noise App" with watchOS 6. While interesting, I think most people know when environmental noise is too loud. Yesterday, Apple was granted a patent that could be a Noise App for AirPods where it could make a difference.

Apple notes in their patent that Consumer electronic headsets have become increasingly popular with users, because they reproduce media such as a music, podcasts and movie soundtracks with high fidelity while at the same time not disturbing others who are nearby. While the listening experience with a headset is enjoyable, and the maximum sound output of a headset is limited in accordance with hearing health safety standards, there is still a need to monitor the headset's sound output over relatively long periods of time such as days and weeks, as part of personal hearing health monitoring that aims to avoid long term exposure to loud sounds.

According to the patent, in-ear sound pressure level, SPL, is determined that is caused by output audio being converted into sound by a headset worn by a user. The in-ear SPL is converted into a sound sample having units that are suitable for evaluating sound noise exposure. These operations are repeated to produce a sequence of sound samples during playback. This sequence of sound samples is then written to a secure database. Access to the database is authorized by the user.

Apple's patent FIG. 1 below illustrates AirPods communicating with an iPhone; FIG. 2 is a flow diagram of a feedforward type acoustic dosimetry process for headset listening. 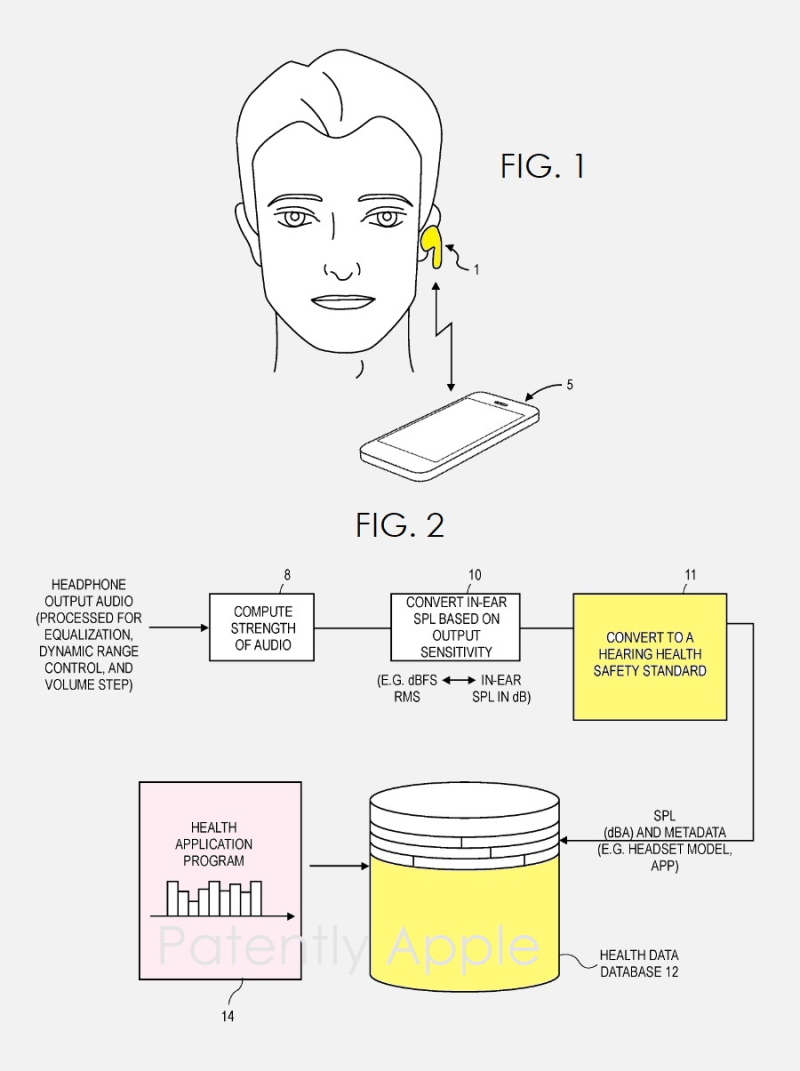 The patent uses the term "In-ear SPL or a Hearing Health Safety Standard" 29 times to prove that this is the focus of the patent.

At one point in the patent Apple notes: "Consider the case where a headphone playback estimate, that is based on the current user settable volume at which certain user content such as a movie soundtrack or music is being played back through headphones, is received contemporaneously with an ambient noise measurement; the user in that case is being exposed to various types of sounds at the same time, as they are both listening to music playback on their headphones and are also in a loud ambient environment that could be heard despite the passive attenuation by the worn headset.

The processor stores a time sequence of such estimated, in-ear SPL values that reflects the user's hearing exposure as it varies over time, for example over a period of hours, days or weeks. This time sequence may be analyzed by the processor to determine when the in-ear SPL exceeds a given level threshold over a given time interval, in response to which the processor signals that the “too loud” notification be immediately generated and presented to the user. 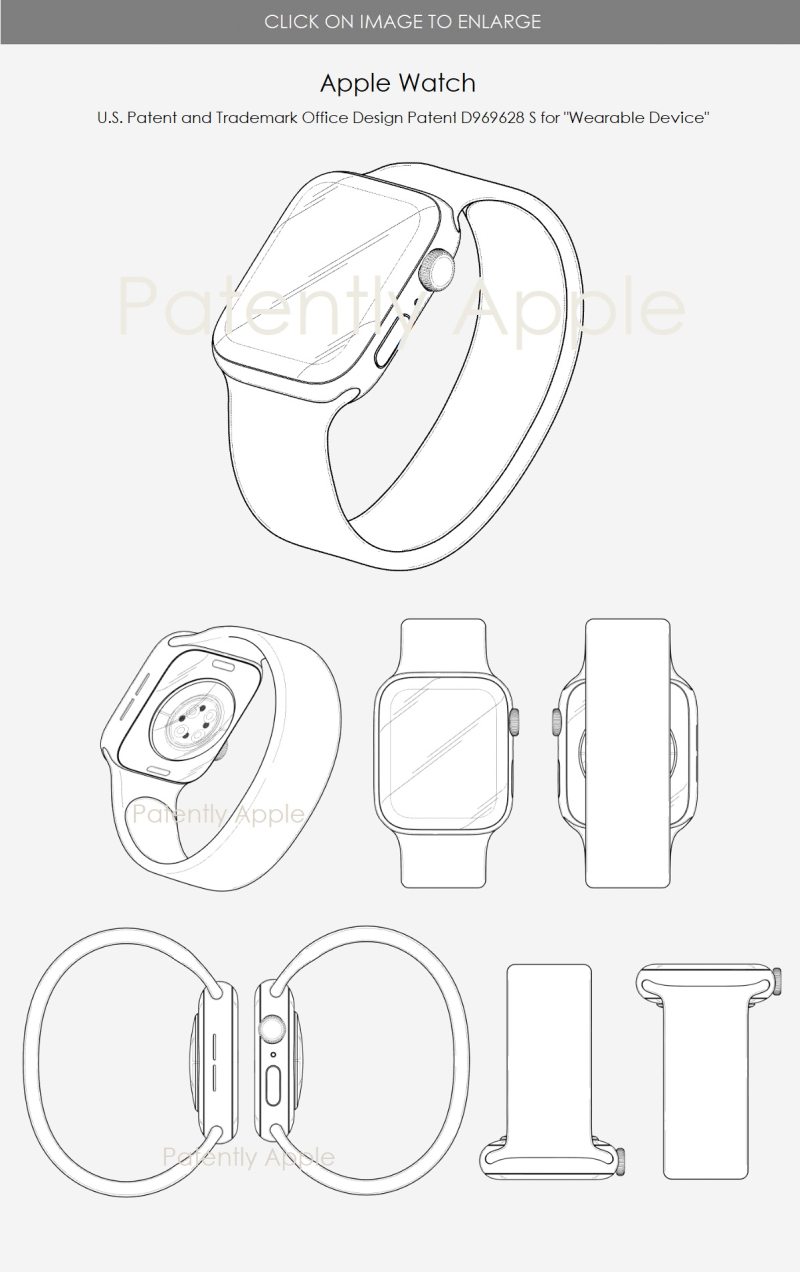 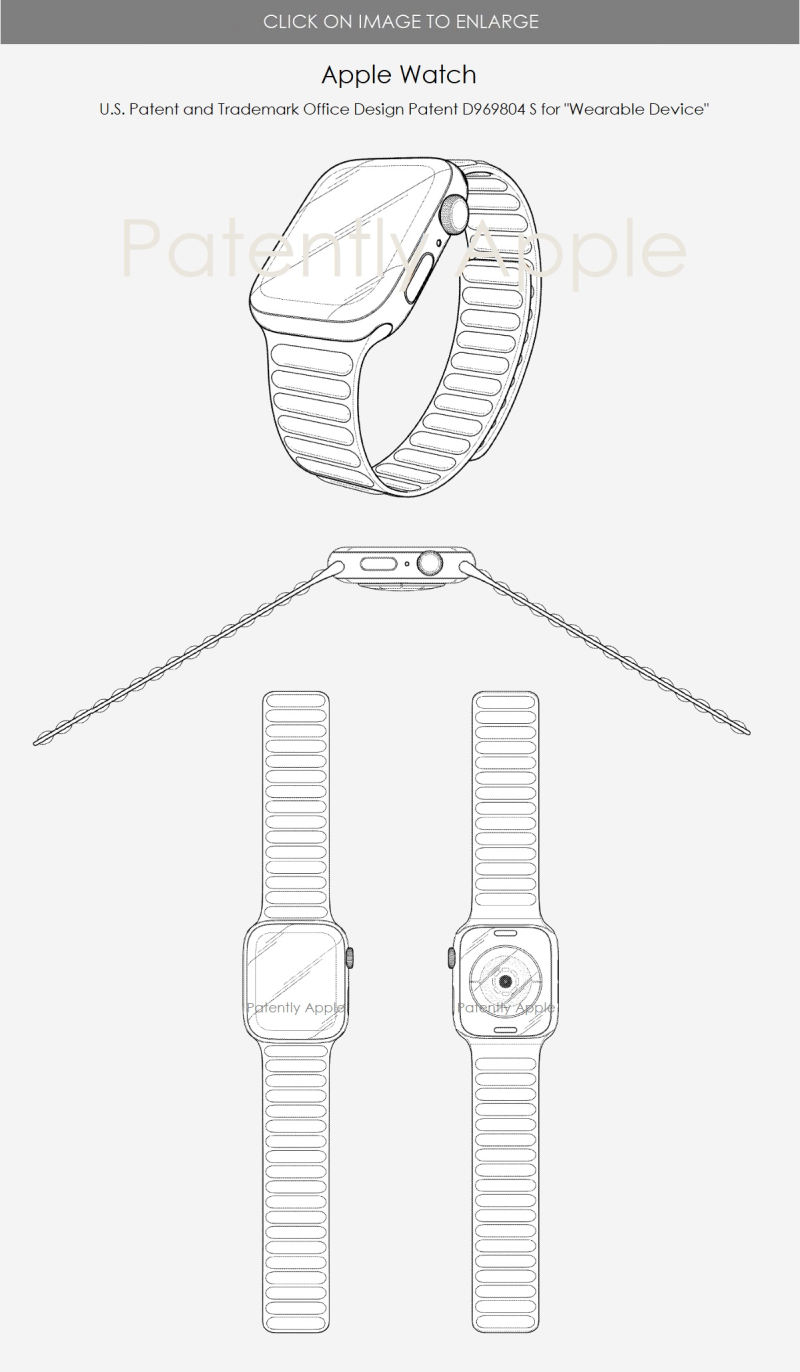