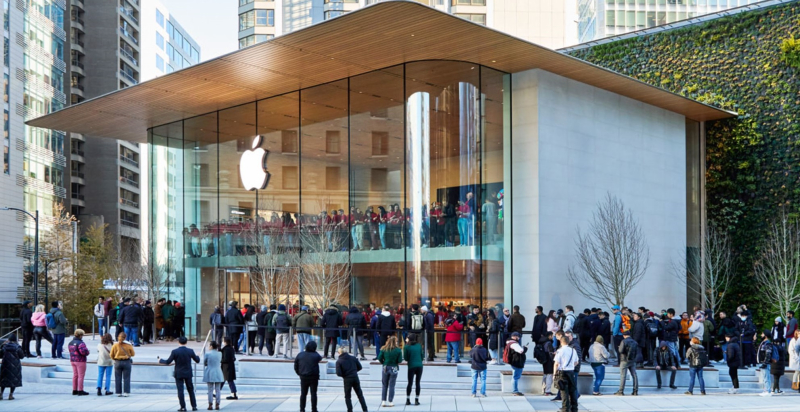 On November 8, Patently Apple called the Apple Pacific Centre in Vancouver, Canada to confirm that the store was open. They even listed the hours it was open that day. However, an Apple fan from Vancouver emailed me to say that the old 'Apple Pacific Center' store was in a mall sitting right behind the new one that was set to open on November 18. And indeed, the new store that opened yesterday now has access to both outdoor foot traffic along with mall traffic from behind the store. Apple calls the new store the "Reimagined Apple Pacific Centre in Vancouver, Canada."

Yesterday the new Apple Pacific Centre opens on the vibrant intersection of West Georgia and Howe streets in the heart of Vancouver, Canada. The reimagined and enhanced Apple Pacific Centre doubles the size of the previous store, and adds additional features and elements. Customers are invited to discover, learn about, and buy Apple’s latest products and services; receive best-in-class support from knowledgeable Apple Specialists; and participate in free Today at Apple sessions that educate and inspire.

Deirdre O’Brien, Apple’s senior vice president of Retail + People: “We couldn’t be more excited to build on our longstanding history in Canada and welcome customers to the beautiful Apple Pacific Centre in Vancouver, a community filled with creativity and deep culture. Facing the Vancouver Art Gallery and its bustling public plaza, the new Apple Pacific Centre was designed to be a hub for community, a place that brings people together with the expert care and support from our fantastic team." 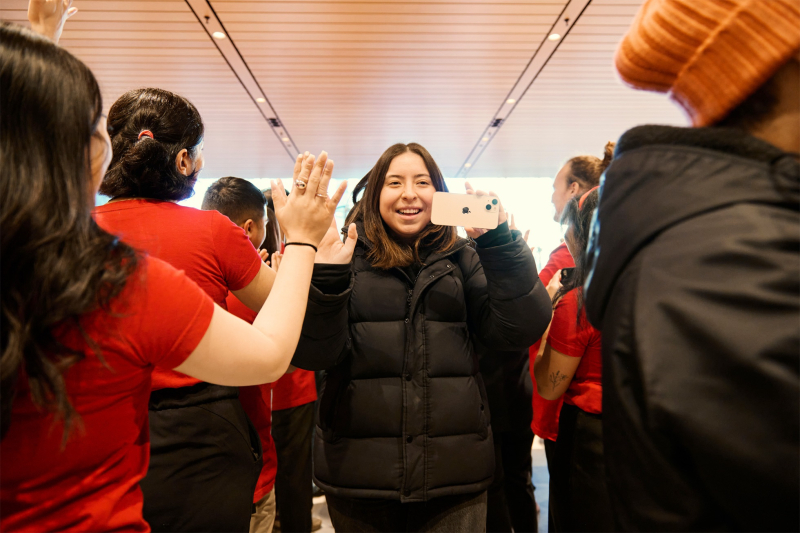 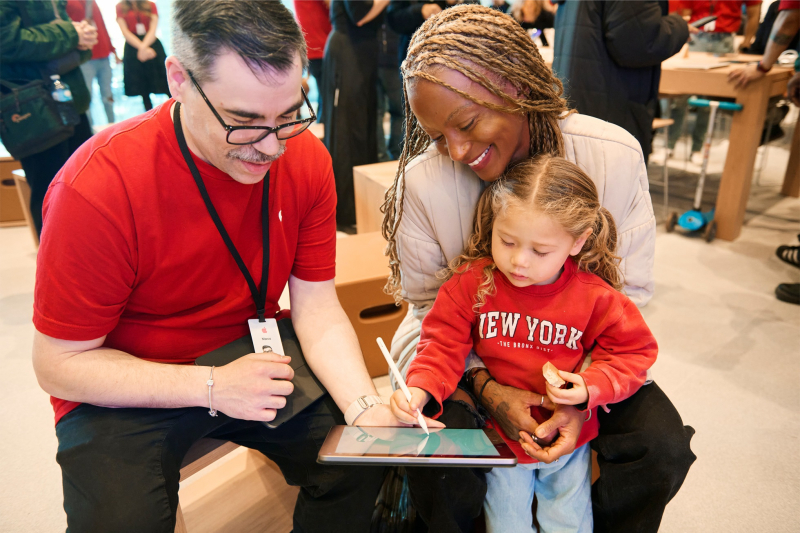 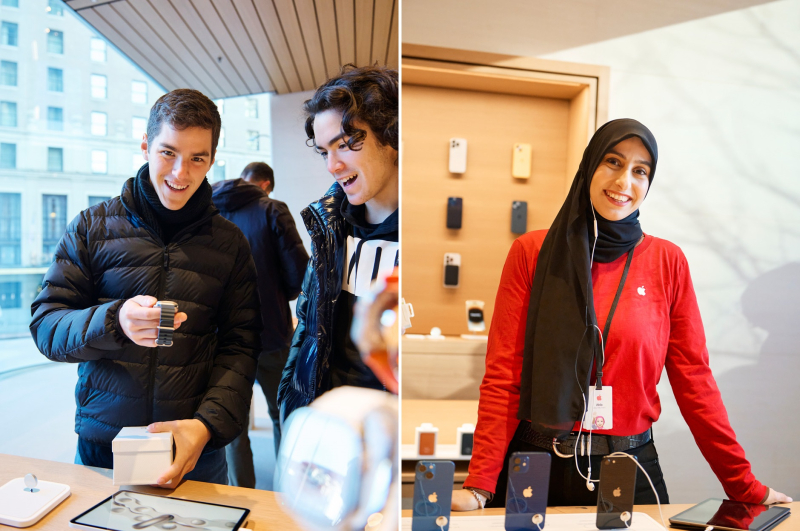 The expanded two-level store offers a communal space to unwind and enjoy the large plaza at the center of creative expression in the city. The facade features 32-foot floor-to-ceiling glass panels, creating a sense of exploration that invites visitors into the store to discover the all-new lineup of iPhone, iPad, Mac, Apple Watch, AirPods, and more. As customers ascend to the second floor, natural light flows through a glass skylight onto a 45-foot grand staircase — one of the tallest in any Apple Store.

The second floor features a Forum and video wall where free Today at Apple sessions teach participants how to code, frame a shot, and edit video. Today at Apple also offers Group Booking for participants interested in learning alongside family, friends, and colleagues, as well as sessions that teach the basics of using assistive technologies and features such as VoiceOver on iPhone and iPad.

The facade is surrounded by 10 magnolia trees sourced from the Pacific Northwest, and a living wall spanning more than 40 feet and featuring 144 species of locally sourced plants frames the exterior of the store. Designed to stay lush throughout the year, the living wall promotes bee and insect habitats, and naturally absorbs heat and traffic noise. Like all Apple facilities, Apple Pacific Centre is powered by 100 percent renewable energy. 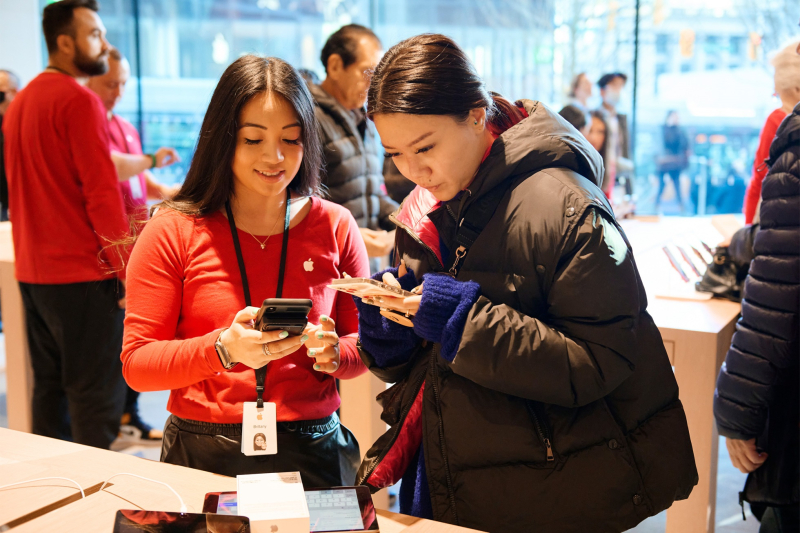 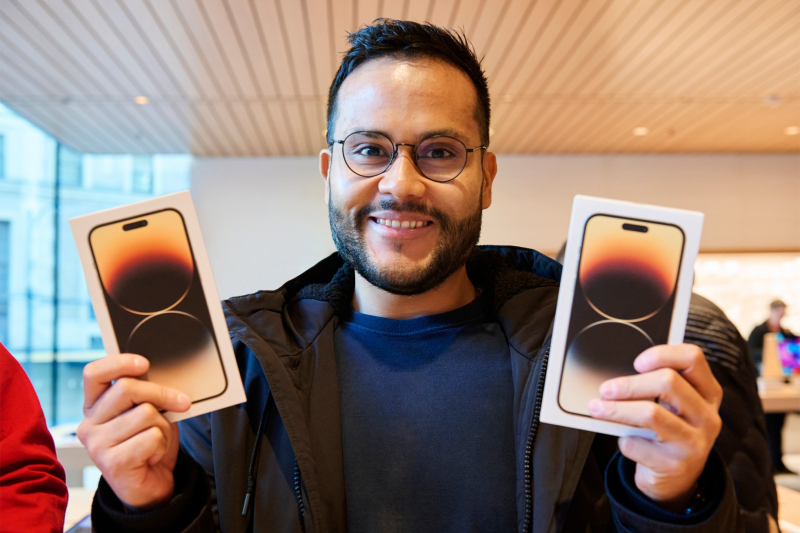 To celebrate the opening, Apple Pacific Centre will play host to a series of creative Today at Apple sessions throughout the weekend, led by local artists, musicians, and photographers. On opening day, Apple is partnering with the Vancouver Art Gallery to co-curate a video wall illustration from Canadian visual artist Sandeep Johal. Additional sessions include live performances by Vancouver-based musician Boslen, followed by a Q&A moderated by Apple Music radio host George Stroumboulopoulos, an iPhone Photo Lab with local portrait photographer Alia Youssef, as well as a performance by Chloe Arnold — the Emmy Award-winning choreographer of the new Apple Original Film Spirited. Visitors can register for sessions at apple.co/journey-into-creativity. 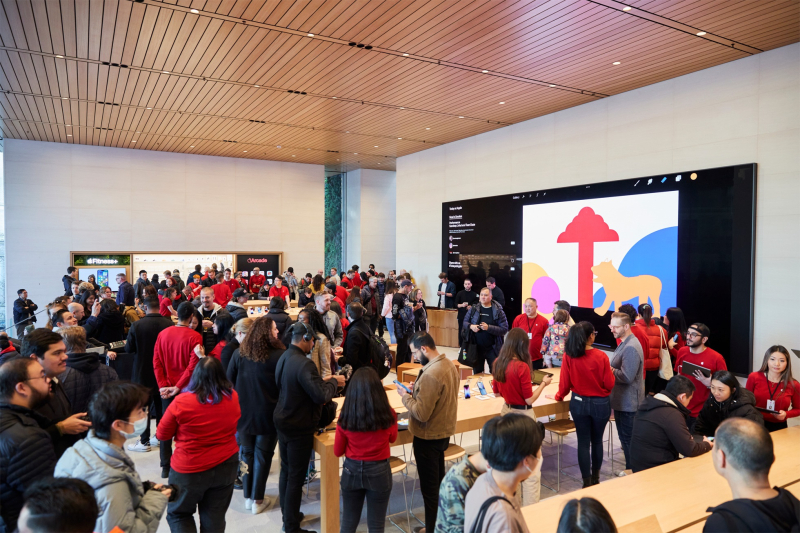 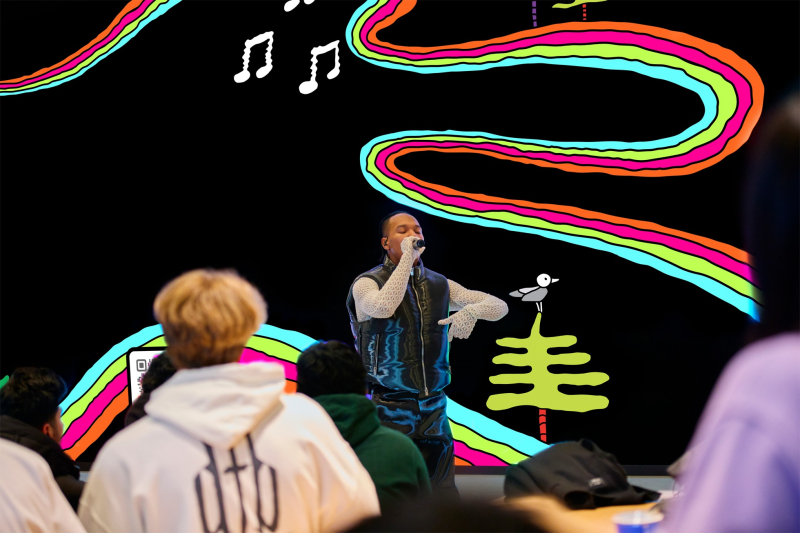 Customers enjoy a special performance by Bolsen to celebrate the opening of Apple Pacific Centre.

Apple has operated in Canada for nearly 40 years with 28 retail stores across the country. Customers are encouraged to explore an Apple Maps Guide by musical icon and Vancouver native Michael Bublé that shares his favorite hometown spots, as well as a curated Apple Music Pacific Centre playlist and upcoming Today at Apple sessions.

The team at the new Apple Pacific Centre is excited to welcome the Vancouver community! Explore this gorgeous new space with a weekend full of cultural programming featuring local artists, musicians, and more. 🇨🇦 pic.twitter.com/A8krKzJBp4