In July 2019, Patently Apple posted a report titled " Vancouver Canada’s Development Permit Board Passes the Proposal for a New Flagship Apple Store." The report noted that "The Apple Store design approved will offer a double-height glass facade and a sweeping, metal cantilevered roof, with the building rotated on a 45-degree axis to diagonally orient the structure to face the Vancouver Art Gallery’s recently renovated North Plaza.

I called the store earlier today a 1-778-373-1800 and the automated AI revealed that the store was open today. When it officially opened is not noted on Apple Pacific Center's webpage. Though it contradicts some Apple news sites claiming that the store opens on November 18. Below is the date and hours that the store is open this week. There is no notice of an event for November 18 on the Store's webpage. 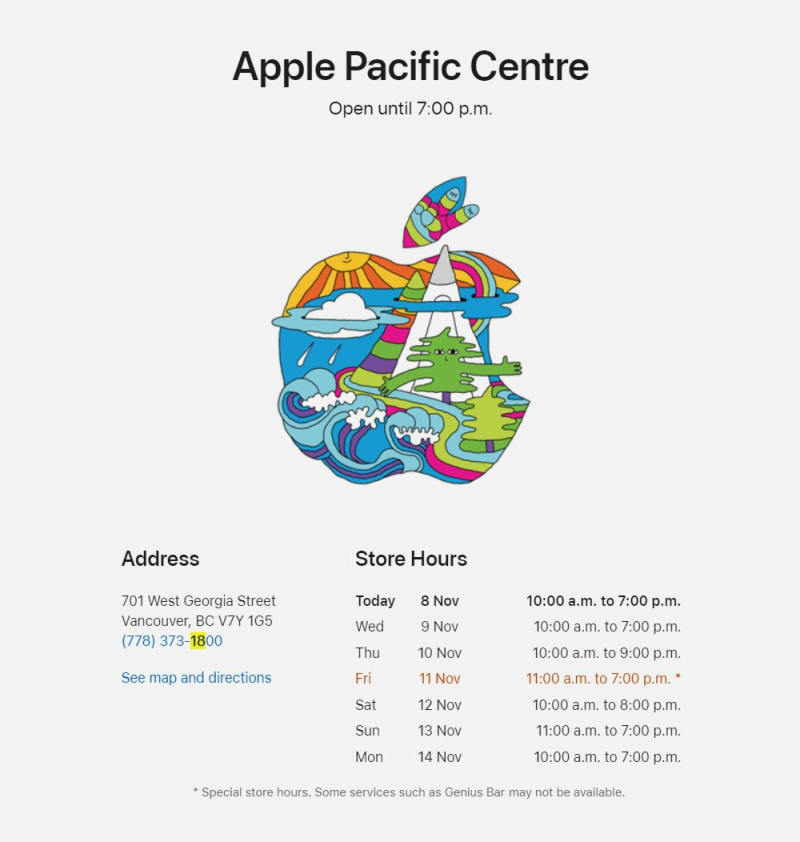 Note: If there's some kind of "Official" Store opening on the 18th, Apple will likely post a press release that will include photos and we'll post a follow-up report at that time.  For now, the information on Apple's website about store hours is what it is.

Follow-up. If there's an "official opening" then we should see Apple post a press release and photos on the 18th or 19th. I look forward to that, if it happens.

Apple's Vancouver site doesn't provide any notice of an opening date as others are claiming.

Thanks for your feedback "Lm". I provided the phone #, call yourself. The open hours are listed. The address is that of the new store. If there's some kind of special event on the 18th, then that will be cool - but the store, according to its website is as clear as day. Cheers!

It's not open, there was an existing old format store in the same mall that is open. (Vancouverite here)