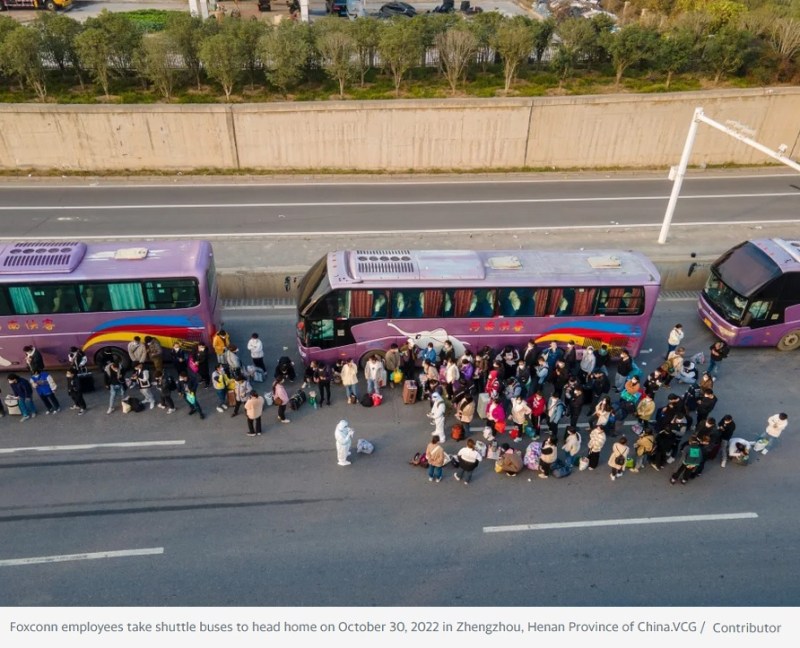 Yesterday we linked to a report on the worker exodus at the main iPhone Plant in China due to fears of COVID breaking out in the plant. This morning we reported that Foxconn vehemently denied that there had been deaths in the company's dormitory. If anything, the report showed that the COVID lockdowns and warnings have spooked iPhone assembly workers to leave in droves in the middle of the night.

Foxconn's management went into high gear to keep the remaining workers from fleeing. According to a new Reuters report, "Foxconn announced that they would quadruple bonuses to workers at its Zhengzhou plant in central China as it seeks to quell discontent over COVID curbs and retain staff at the giant iPhone manufacturing site.

Daily bonuses for employees, who are part of a Foxconn unit responsible for making electronics including smartphones at the site, have been raised to 400 yuan ($55) a day for November from 100 yuan, according to the official WeChat account of Foxconn's Zhengzhou plant.

The Zhengzhou plant has been rocked by discontent over stringent measures to curb the spread of COVID-19, with several workers fleeing the site over the weekend after complaining about their treatment and provisions via social media.

Foxconn had no choice but to follow government instructions which had put workers in "miserable conditions", a person familiar with the situation on campus told Reuters, adding that the circumstances caught management by surprise.

"Initially there wasn't enough to eat or drink," said the source, who declined to be identified as they were not authorized to speak to the media. Essential supplies had since been shipped into the Foxconn campus after the shortage triggered "a sense of anxiety", the source added.

The plant had faced capacity constraints in isolating those infected, a Foxconn manager who oversees more than 1,000 workers told a unit of financial news outlet Yicai.

Panic also spread among workers due to rumors on social media and perceptions they were at risk of severe illness should they catch the virus, said the unnamed manager. For more, read the full Reuters report.