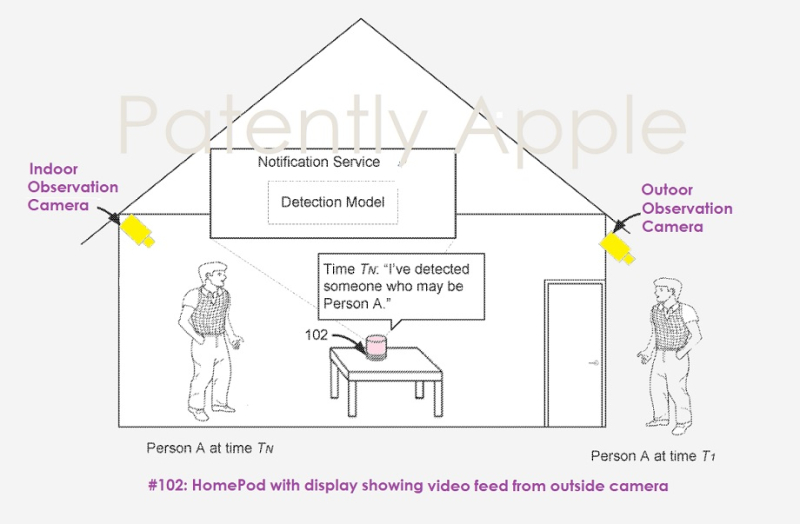 Early this morning, Patently Apple discovered a patent application that Apple filed in Europe titled "Identity Recognition Utilizing Face-Associated Body Characteristics." The patent covers a home surveillance camera system with indoor and outdoor cameras communicating with a person in the home that someone is at the front or back door. The camera will stream live video of the visitor or criminal on an iPad, iPhone or HomePod (as shown in our cover graphic). Whether Apple intends to work with third party developers on this system or is planning to sell such a system directly in a store or part of a future Home Installation Service is unknown at this time.

A gallery of images may be stored, where each image of the gallery includes a torso, and the images of the torso can be associated with the particular person who's face had been identified. In some instances, the identified face may correspond to a person in a contacts list, such that the face/person are known by an owner/user of the device. Subsequently, the device can receive a second video feed showing a second person whose face is determined to not be recognized by the device (e.g., an obstructed view or poor image quality) or is not visible to the device (e.g., walking away from the camera).

The notification may be a message (e.g., a text, email, pop-up, etc.) or it may be a name or visual identifier on a screen displaying the frames or video. In this way, techniques may enable a device to identify a person without having a view or quality image of the face. Additionally, the device may provide notifications of the presence of a particular person in a wider range of scenarios and/or, with higher precision/recall, for example, including when the person's face may not be shown in a video feed and/or recognizable by the device. In some examples, the gallery of images corresponding to physical characteristics (e.g., torso, etc.) may only be stored for a particular amount of time (e.g., one day, one week, or the like). In this way, the gallery of images may be repopulated each day (or longer) for each detected person.

Apple's patent FIG. 1 below is a simplified block diagram #100 that illustrates a system notification service operating in an example home environment #101. The home env1ronment may be associated with one or more people (e.g., contact persons) who have some common affiliation (e.g., family members, roommates, a housekeeper, a babysitter, etc.). ln this example, user #112 may represent an affiliated user (e.g., "Person A," who may be the housekeeper). 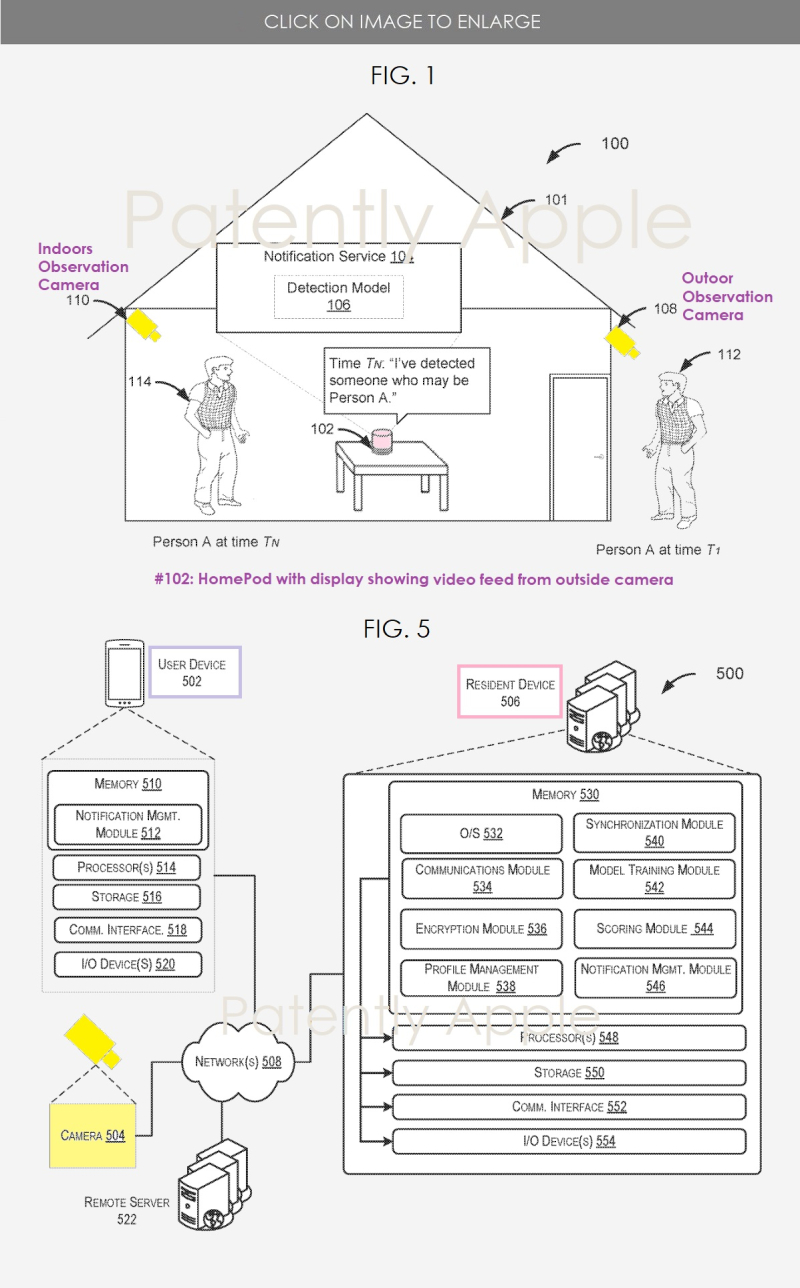 Apple's patent FIG. 2 below is another simplified block diagram illustrating at least some example techniques for providing a notification based on determining the presence of a particular person at a location. 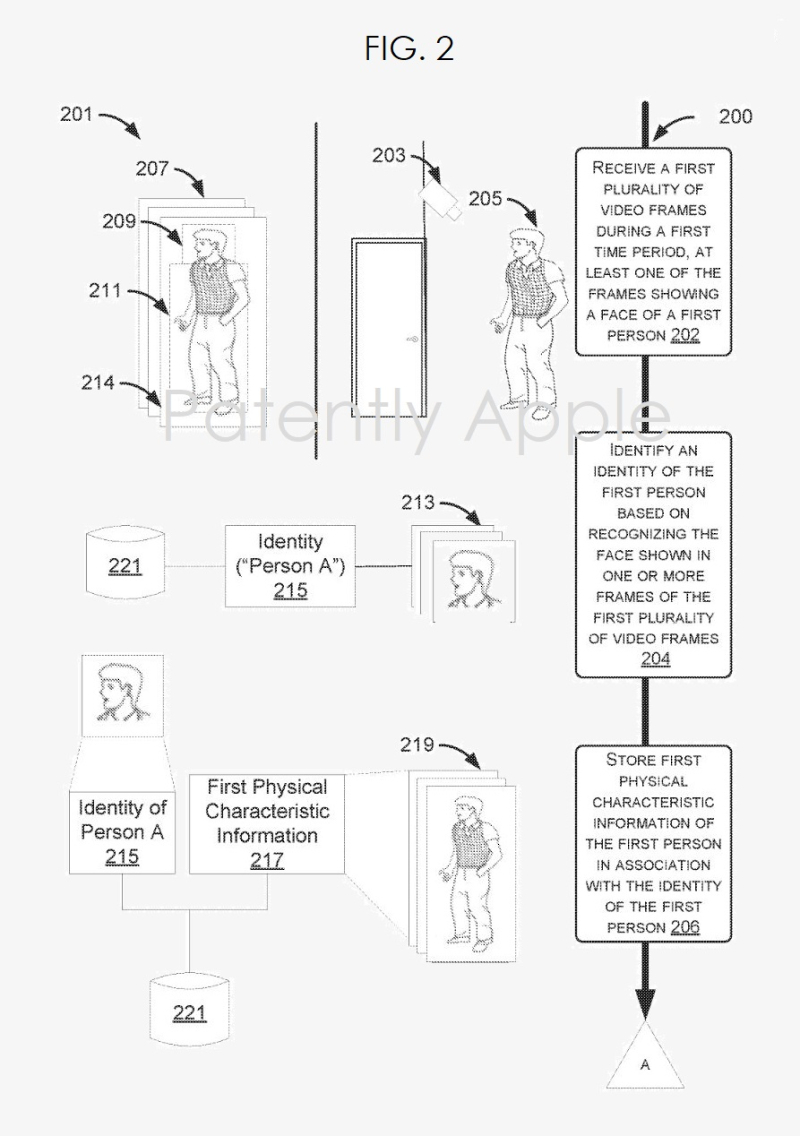 Apple's patent FIG. 3 below is another simplified block diagram illustrating at least some example techniques for providing a notification based on determining the presence of a particular person at a location. 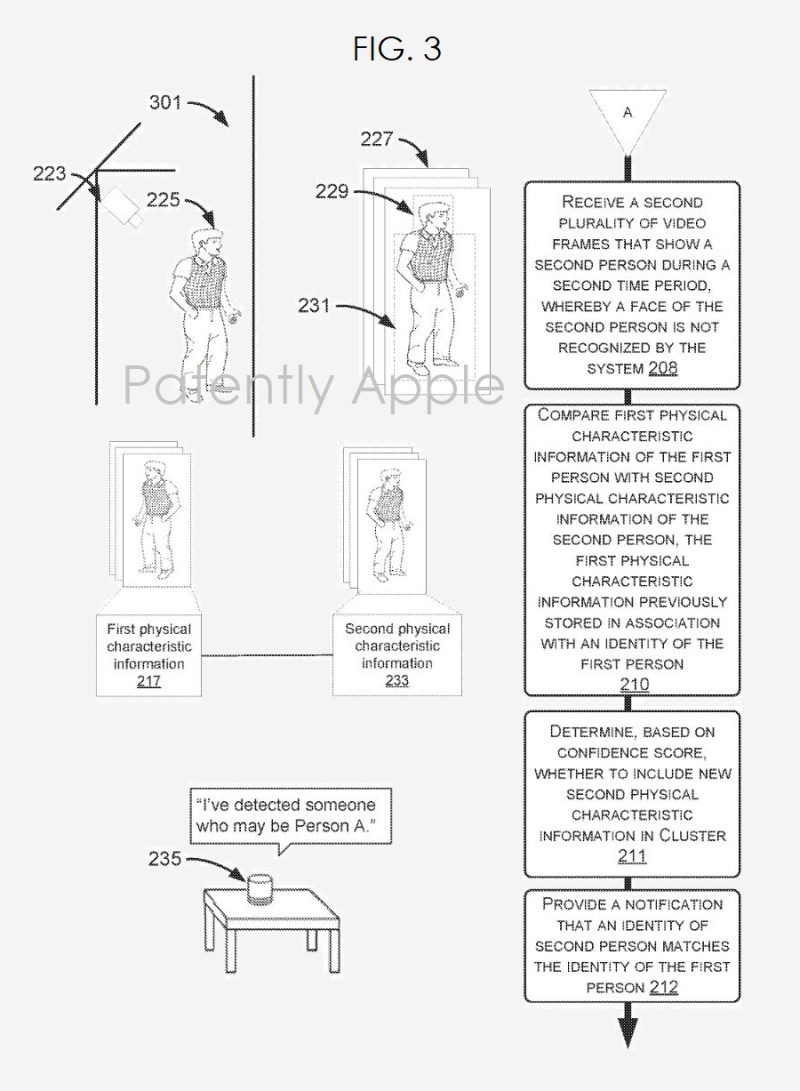 Apple's patent FIG. 4 below is another simplified block diagram illustrating at least some example techniques involving a user interface (UI) for providing a notification based on determining the presence of a particular person at a location. 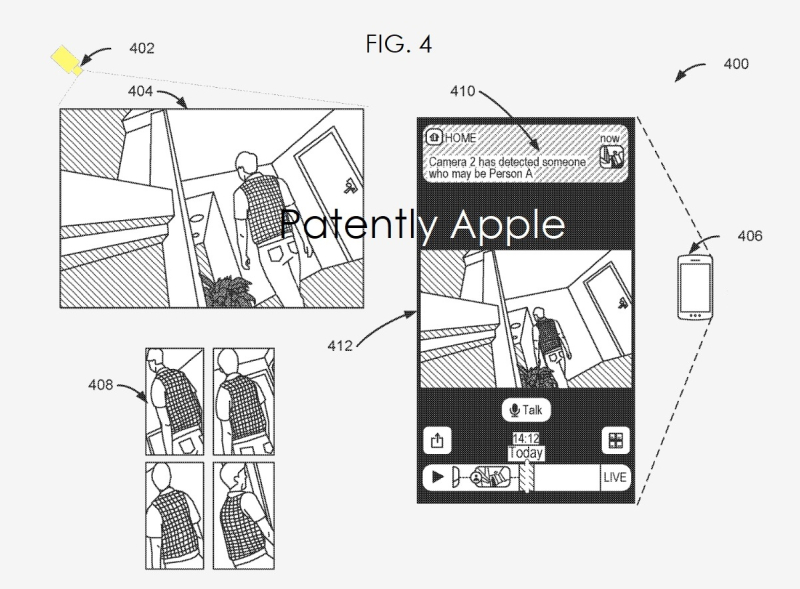 Patently Apple posted a patent report back in April 2020 that first described a future HomePod having an integrated camera. Then in December 2021, we covered Apple's first patent application relating to a future home surveillance system. In that patent, the home user could view who was at the door via a camera system stream shown on the user's Apple TV device. 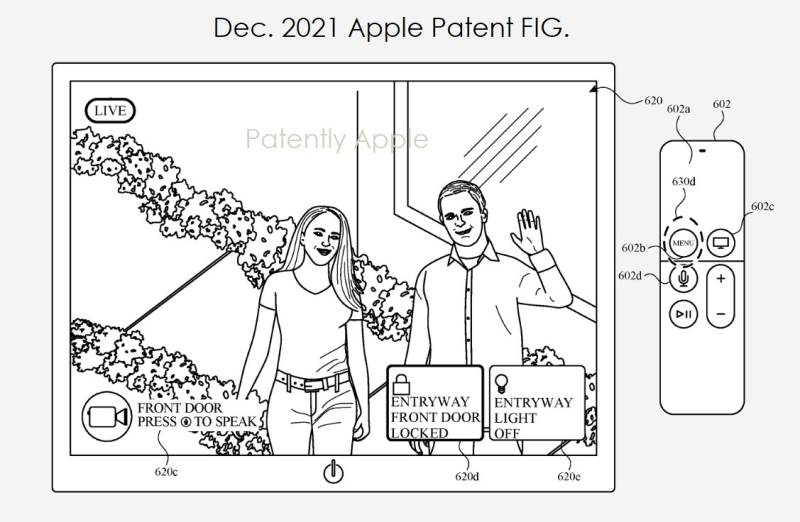 Today's patent revelations expand on Apple's project that started in 2020 by adding a HomePod to the mix of devices that video could be streamed to in a home surveillance system.