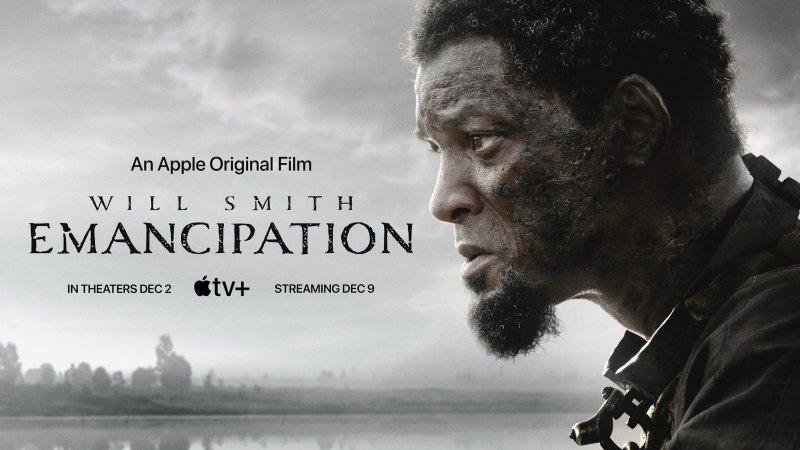 Early this morning, Patently Apple posted a report titled "Apple & the NAACP hosted the screening of 'Emancipation' starring Will Smith for members of the Congressional Black Caucus and more." This afternoon, Apple has released the official trailer for 'Emancipation' that has been confirmed will premiere in theaters on December 2 and globally on Apple TV+ on Friday December 9, 2022.

“Emancipation” tells the triumphant story of Peter (Smith), a man who escapes from slavery, relying on his wits, unwavering faith and deep love for his family to evade cold-blooded hunters and the unforgiving swamps of Louisiana on his quest for freedom. The film is inspired by the 1863 photos of “Whipped Peter,” taken during a Union Army medical examination, that first appeared in Harper’s Weekly. One image, known as “The Scourged Back,” which shows Peter’s bare back mutilated by a whipping delivered by his enslavers, ultimately contributed to growing public opposition to slavery.

Deadline Interview with Director and Producer of 'Emancipation Antoine Fuqua

Deadline: How did it feel to finally show Emancipation to an audience on Saturday that really cares about the central historical issues in the film?

Antoine Fuqua: "It felt incredible. This was really our first time experiencing it with a complete film and an audience. To watch people react, gasping, talking and commenting on things that were happening in the film, really all the things you hope your movie would do for an audience. It moved them, entertained them. We had a great conversation about the subject matter that was important to them. So, yeah, it was pretty amazing."

Deadline: What were some of the things that resonated, that hit you when you read the script and signed on Will Smith way back when?

Fuqua: "One thing, when I first read the script, I was inspired. For me as a director, doing a film about slavery is daunting. Because you want to get it right and I’d want to make it as truthful and as authentic as I can. What I found is, it was very inspiring to people. Peter’s image from 1863 inspired me to want to make the film and inspired Will to want to make the film. It seemed to inspire the audience similarly; they clapped and cheered afterward. That was the thing I felt most moved by."

Deadline: "Emancipation might have come in as an awards-season front-runner, had the unfortunate events of the last Oscar night not happened. Can you share a bit about the discussions that happened after Will Smith slapped Chris Rock after he’d made that joke about Jada Pinkett-Smith’s hair, and the back and forth about whether to wait, or to put the film out this year?"

Fuqua: "Really, I was always saying that, as a filmmaker, you want your work out there, especially something this important. It was Apple, behind the scenes, they were pushing that as well, trying to navigate through the waters. They never stopped talking about releasing the film, and when would be best strategically. Apple would call me often, with Will, and I have to say Apple has been amazing through this whole film. We moved from Georgia to Louisiana, and they never blinked. We weathered hurricanes, Covid, all those things."

Deadline: "How much of a toll did the hurricane take on your production?'

Fuqua: "It was the hardest film I ever did. We were down for a little over a month. Just about every location that we had was wiped away. We had to re-scout for locations. I was in Louisiana, had to go to Baton Rouge, and the locations I’d fallen in love with were no longer there, or were impossible to get to. People on the set, the crew, who worked on the film from Louisiana, some of them were homeless and were trying to figure out where they were going to stay when we came back. Again, Apple stepped up to help people, but it was a tough one. I’d never experienced anything quite like that before, it was a scary thing to be around. When we came back, we still had to deal with a city that was getting back on its feet. We were still dealing with locations we couldn’t get to, or would just take longer to get to. The heat didn’t help, and we had to film in the swamps. So, going back into the swamps was dangerous at times, but it’s funny. The new locations we found, and the others we decided to shoot in, actually were better for the film. They were harsh and lent a reality to it that the people living there at that time had to survive through."

For more of the interview, read the full Deadline report.