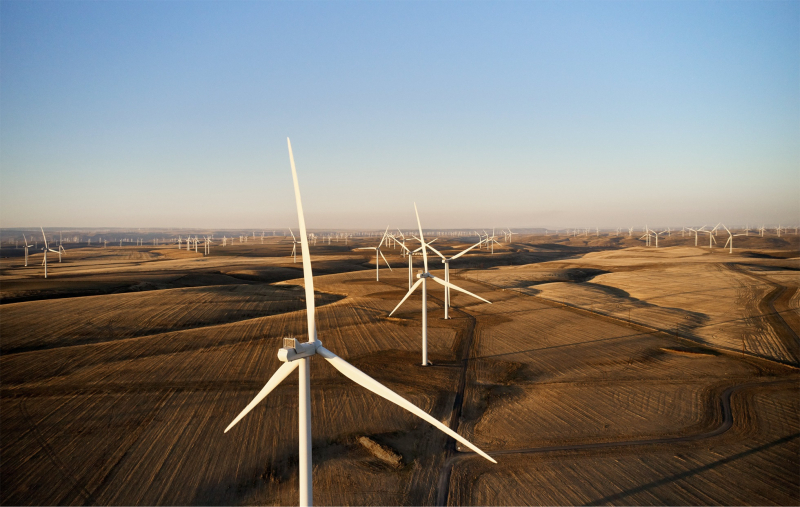 This morning, Apple is calling on its global supply chain to take new steps to address their greenhouse gas emissions and take a comprehensive approach to decarbonization. The company will evaluate the work of its major manufacturing partners to decarbonize their Apple-related operations — including running on 100 percent renewable electricity — and will track yearly progress. Apple has been carbon neutral for its global corporate operations since 2020, and is laser-focused on its ambitious goal to become carbon neutral across its entire global supply chain and the life cycle of every product.

As the impacts of climate change are increasingly felt around the world, Apple also announced new initiatives and investments aimed at helping decarbonize the global economy and promote innovative climate solutions for communities. These include significant investments in renewable energy in Europe, partnerships to support businesses transitioning to clean energy, and new support for projects that advance natural carbon removal and community-driven climate solutions around the world.

“Fighting climate change remains one of Apple’s most urgent priorities, and moments like this put action to those words,” said Tim Cook, Apple’s CEO. “We’re looking forward to continued partnership with our suppliers to make Apple’s supply chain carbon neutral by 2030. Climate action at Apple doesn’t stop at our doors, and in this work, we’re determined to be a ripple in the pond that creates a bigger change.” 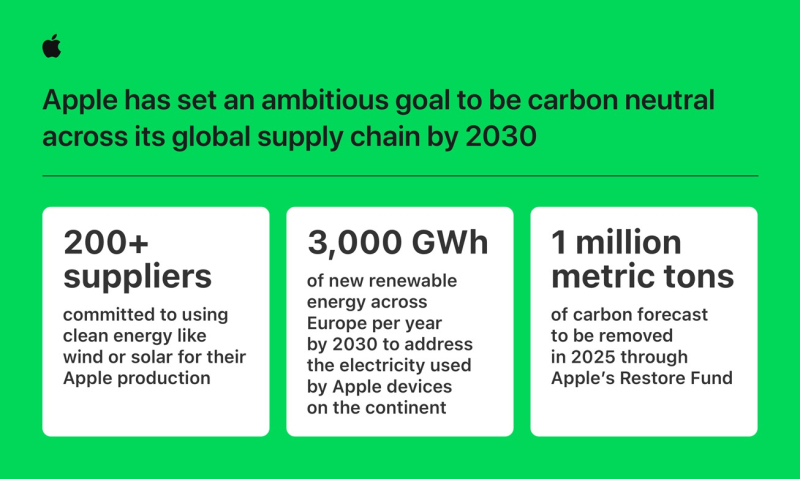 As part of Apple’s supplier engagement, the company is partnering with its worldwide supply chain to urge accelerated action to achieve carbon neutrality for their Apple-related corporate operations. The company requires reporting on progress toward these goals — specifically Scope 1 and Scope 2 emissions reductions related to Apple production — and will track and audit annual progress. Apple will partner with suppliers that are working with urgency and making measurable progress toward decarbonization.

Additionally, Apple is encouraging suppliers to address the greenhouse gas emissions beyond their Apple production, prioritizing clean energy. As part of the company’s work to achieve its 2030 goal, Apple has reduced its emissions by 40 percent since 2015, largely through improvements in energy efficiency, low-carbon design, becoming carbon neutral for corporate operations, and transitioning its supply chain to renewable electricity.

To help suppliers meet their commitments and go even further, Apple offers a suite of free e-learning resources and live trainings through its Clean Energy Program, and works closely with its suppliers and local partners to identify effective solutions for renewable energy and carbon removal. More than 150 supplier representatives have participated in live trainings this year alone. Apple plans to donate these resources to create a first-of-its-kind public training platform that is free for businesses across many different industries, ensuring that companies of all sizes — in Apple’s supply chain and beyond — will have access to the resources and advocacy networks needed to speed their transition to 100 percent clean energy and carbon neutrality.

As part of Apple’s commitment to clean energy, the company has sourced renewable energy to power all of its corporate offices, retail stores, and data centers in 44 countries since 2018, and its suppliers have brought more than 10 gigawatts of clean power online around the world. Building on this progress, Apple plans to facilitate the construction of large-scale solar and wind projects in Europe, with projects ranging between 30 and 300 megawatts — following an initial request for proposals issued earlier this year. Over the next several years, the company aims to procure enough renewable energy to power all Apple devices on the continent with low-carbon electricity, while continuing to power corporate offices, retail stores, and data centers with 100 percent clean energy. In total, the planned investments will add 3,000 gigawatt hours per year of new renewable energy on the grid.

The European investments are part of the company’s larger strategy to address the approximately 22 percent of its carbon footprint that comes from the electricity customers use to charge their devices. Wherever possible, Apple plans to bring clean energy projects online in grids with high carbon intensity, enhancing the impact on Europe’s electricity sector at a time when renewable generation is critically needed. Earlier this year, the company announced new renewable energy projects in the United States and Australia designed to address customer product use.

Customers in the United States can now play a role in decreasing the carbon footprint of iPhone with Clean Energy Charging. Available starting this month in the United States through iOS 16, the new feature looks at the sources of the electricity during expected charge times and optimizes for when the grid is using cleaner energy sources like solar or wind. To continue to advance climate-smart decision-making for customers, employees, and partners, Apple has joined the University of California, Berkeley’s CoolClimate Network, a research partnership to motivate and empower individuals and organizations to make low-carbon choices. 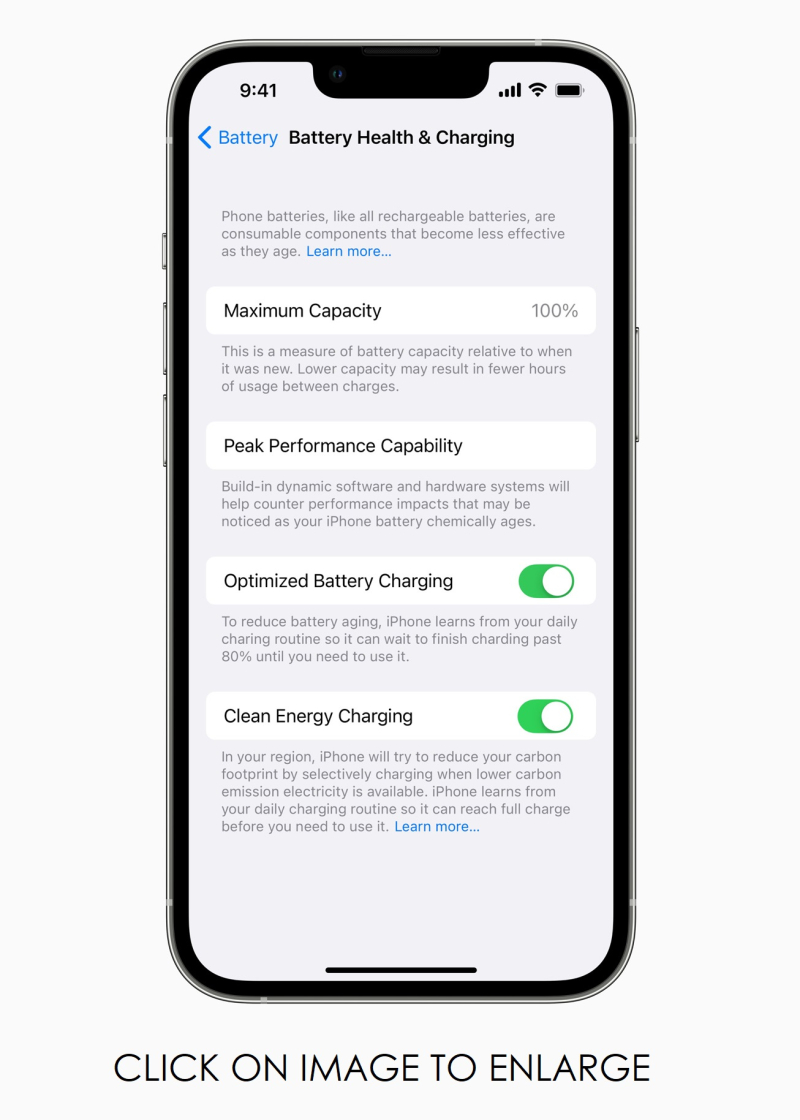 Advancing Equitable and Financially Viable Climate Solutions Around the World

Apple today also announced three new projects through the Restore Fund, a first-of-its-kind carbon removal initiative that aims to generate a financial return while removing carbon dioxide from the atmosphere. In partnership with Conservation International and Goldman Sachs, Apple has invested with three high-quality forestry managers in Brazil and Paraguay to restore 150,000 acres of sustainably certified working forests and protect around 100,000 acres of native forests, grasslands, and wetlands.

Together, these initial forestry projects are forecast to remove 1 million metric tons of carbon dioxide from the atmosphere in 2025. To ensure accurate monitoring, reporting, and verification of the projects’ carbon removal impact, Apple is working with partners to analyze satellite imagery and deploy innovative remote sensing technologies.

As Apple continues to make progress reducing emissions by 75 percent by 2030, the company prioritizes high-quality nature-based solutions for the 25 percent of remaining emissions that are unavoidable with existing technologies. At the same time, Apple is working to spur entirely new solutions, including through support for analysis by Carbon Direct identifying pathways for developing sustainable aviation fuels. 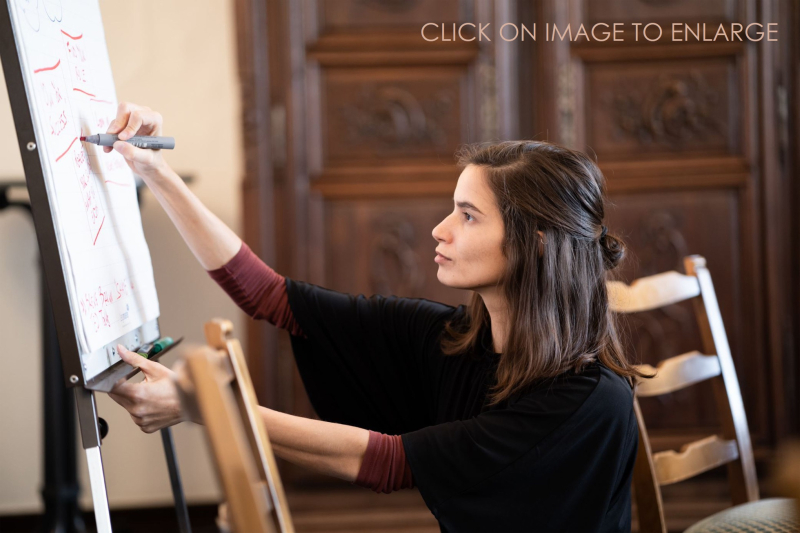 A member of the ChangemakerXchange community takes part in a workshop on social innovation in Cologne, Germany. ChangemakerXchange and Apple are partnering to strengthen climate leadership in Europe, the Middle East, and North Africa.

In addition to the Restore Fund projects, Apple today announced new partnerships to advance community-driven climate solutions around the world: