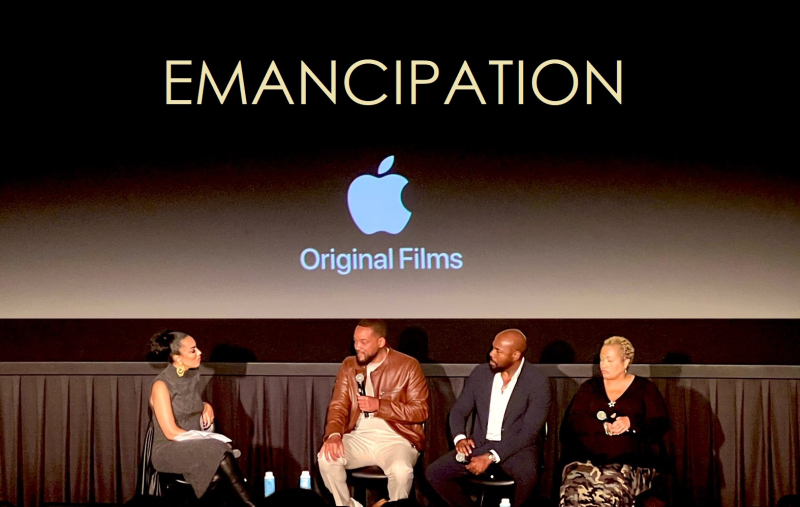 On September 18, Patently Apple posted a report titled "Apple has to Decide whether or not to Delay the Film 'Emancipation' until 2023 due to Will Smith's Oscar Night Slap." The report noted that Apple had set up a general audience test screening of “Emancipation” in Chicago earlier this year, according to three people with knowledge of the event who spoke on condition of anonymity because they were not permitted to discuss it publicly. They said it generated an overwhelmingly positive reaction, specifically for Mr. Smith’s performance, which one of the people called “volcanic.” Audience members, during the after-screening feedback, said they were not turned off by Mr. Smith’s recent public behavior."

We're learning today that "Apple held its first showing Saturday of Emancipation, the Antoine Fuqua-directed thriller that stars Will Smith an enslaved man who, after recovering from a whipping that nearly killed him, braved the swamps of Louisiana armed with only his wits, to escape cold-blooded slave hunters and be free.

Both Smith and Fuqua made their first public comments about the film in a follow-up discussion following the private screening, held during the Congressional Black Caucus Foundation’s 51st annual Legislative Conference in DC."

This is the most solid indication that the film will arrive for awards season, a much rougher road because of Smith’s slap of Chris Rock at the last Oscars.

Apple Original Films and the NAACP hosted the screening for a group of members from the community representing groups that included the Congressional Black Caucus, Historically Black College and Universities, the Divine 9 (Historically Black Fraternities and Sororities), National Council of Negro Women, the National Coalition on Black Civic Participation, Power Rising, #WinWithBlackWomen and other social impact leaders.

At a special screening of the film #Emancipation, with director @AntoineFuqua and producer and star Will Smith. This is the first time Will has seen the film with an audience. @appletv @appletvplus pic.twitter.com/RMDGvYIEky

Will the public and awards crowd look past the distraction to the substance of an important film? We'll know soon enough." For now, Apple just confirmed the film will debut on December 9th.

Inspired by a true story, an enslaved man embarks on a perilous journey to reunite with his family. #Emancipation, directed by Antoine Fuqua and starring Will Smith, premieres in theaters December 2, streaming on Apple TV+ December 9 pic.twitter.com/sSj4o2ajw1