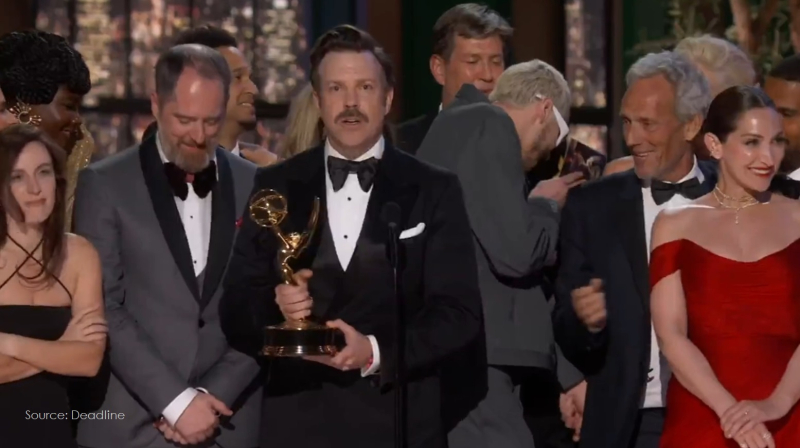 Though the show is extremely popular with fans and critics alike, it is rumored to end with its third season which is currently in production in the U.K.

Deadline further noted that "Across its two-season run, Ted Lasso has earned a total of 40 nominations and 11 wins."

In a second report, Deadline noted that "The future of Ted Lasso beyond Season 3 has become a big source of speculation — at least among TV reporters. But Jason Sudeikis is not ready to say if they’re coming back for another year, no matter how happy he is that his Apple TV+ show just won another Emmy for Outstanding Comedy Series.

Sudeikis: "I don’t know, it’s up to more factors than myself. The response has been overwhelming. We have a tremendous group of writers, actors, people in production and post-production, all of those thrown in the jambalaya of possibility. I couldn’t say yes or no. I know this part of the show is what it’s supposed to be. I apologize for not giving you a direct answer because that’s more helpful for headlines." Though "If I knew, I wouldn’t tell you."

Apple has not confirmed the series will wrap with Season 3. For now, Sudeikis sure doesn’t seem like he’s ready to leave his buddies. “Every single person up here gets along with each other, they support each other, both as artists and human beings,” he said backstage with the cast and writers of Ted Lasso. “Every single day we show up, it’s just fun. People care about each other. They want to see the best for each other. What a terrific reason to do a Season 4, right?” for more read Deadline's second report.

There are photos from Getty's of some of the cast of Severance along with Reese Witherspoon at the afterparty that you could view here.

There must be magic on the pitch at @AFCRichmond because @TedLasso and the Diamond Dogs have done it again. Congratulations to the cast, crew, and all involved at @AppleTVPlus on your Emmy wins! pic.twitter.com/owyZGen3RS