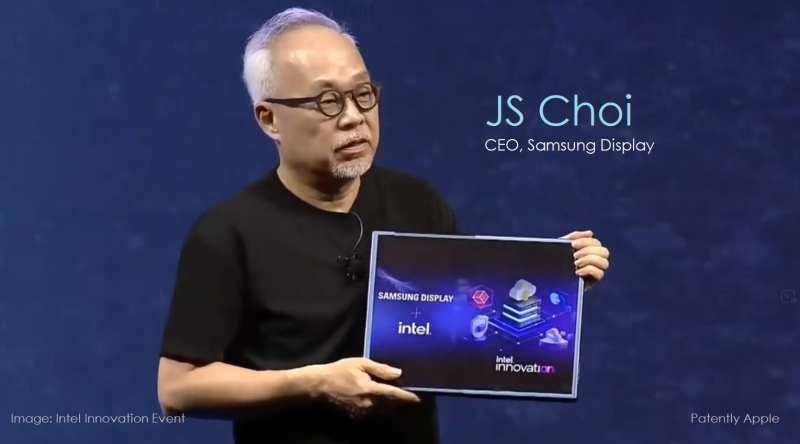 Patently Apple and our Patently Mobile Patent site have been covering a number of industry trends over the years that stem from patent filings around the world. One of the more interesting future trends happens to be smartphones and tablets that will one day offer an expandable display using "rollable" (or scrollable) OLED flexible displays.

Samsung's slidable display patent blitz in June was a clear sign that the company was escalating development of slidable devices. Yesterday at Intel's Innovation Keynote with CEO Pat Gelsinger there was a surprise guest: Samsung Display's CEO TS Choi who introduced Samsung's coming Slidable tablet, as presented in the video below.

In October 2020, Patently Apple posted a report titled "Intel, Samsung, Microsoft are Collaborating on the new 'Horseshoe Bend Project' that covers 17" Foldable Display Notebook standards." The project was primarily focused on producing 17" foldable tablet displays that would be sold as hybrid tablet-notebooks, much like the new Lenovo X1 Fold just reviewed by Engadget earlier this month.

Yesterday's surprise announcement by Samsung shows that their Horseshoe Bend Project also included the development of a tablet with a flexible display that is designed expand using a sliding mechanism.  Thankfully the sliding display works using a manual methodology in lieu of a motorized mechanism which could present users with problems over time.

We know that Apple has been working on both foldable and slidable/scrollable iPads and iPhones, and will more than likely work with Samsung, LG and/or BOE to make it happen when the time is right.

Many fans believe that the iPhone and iPad are getting a little boring and adding new form factors into the mix could be a way of shaking things up. The only question now is timing to market. Samsung Display's CEO simply stated yesterday that new PC form factors with flexible displays are coming in the "near future" – which is rather open-ended.