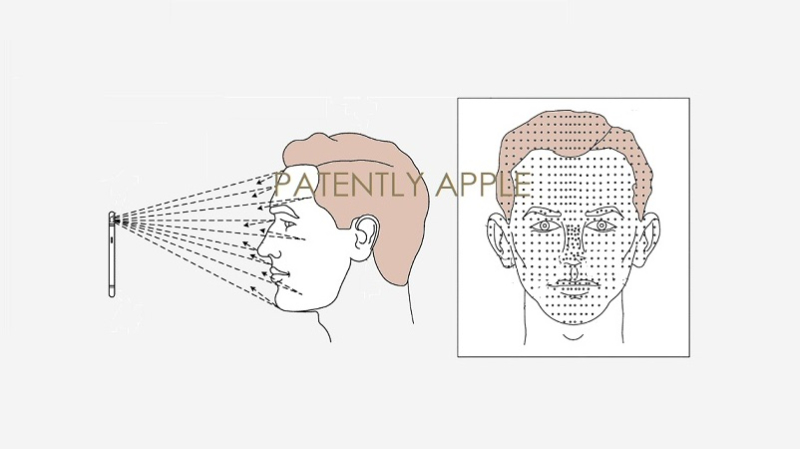 Today the US Patent & Trademark Office published a patent application from Apple that relates to a new version of Face ID Depth Mapping and method for projecting patterned light. Apple describes this new system as being more compact for portable devices. Whether this invention was implemented in the iPhone 14 Pro models as one of the contributing factors in reducing the full length of the Face ID camera notch is unknown at this time. In late August, the U.S. Patent Office published an Apple patent application regarding a new folded projector that would also contribute to a smaller notch.

Apple notes that many optical devices and applications depend on projection of patterned light, i.e., a far-field light pattern having a certain well-defined spatial distribution. Some of these applications also require that the spatial modulation of the pattern be controllable, meaning that the pattern can have variable shape and intensity characteristics.

As one example, some LiDAR systems project an array of pulsed laser beams toward a target scene and create a depth map of the target scene by measuring the times of flight of the pulses reflected from each beam. Modulation of the spatial pattern of the pulsed laser beams, typically by scanning each beam over a certain range, can be used to increase the resolution and accuracy of the depth map.

Existing solutions for this purpose, however, tend to be bulky and heavy, since they must include hardware for both generating and scanning the beam pattern. The scanning is generally performed mechanically, for example by rotating a suitable mirror or array of mirrors. Consequently, scanning projection systems of this sort are difficult to integrate into wearable and portable devices.

Embodiments of the present invention provide compact optical transmission devices that address these problems. The disclosed devices are advantageous in being able to project and modulate a far-field light pattern without using any moving optical or mechanical parts.

The embodiments described in Apple's patent application illustrate the usefulness of such devices in projecting a variable pattern of pulsed laser light spots for purposes of depth mapping. The techniques used in these embodiments, may be applied readily in projecting variable light patterns of other sorts, using either pulsed or continuous radiation.

Apple's patent FIG. 1 below is a block diagram that schematically illustrates depth mapping apparatus #20, in accordance with an embodiment of the invention. 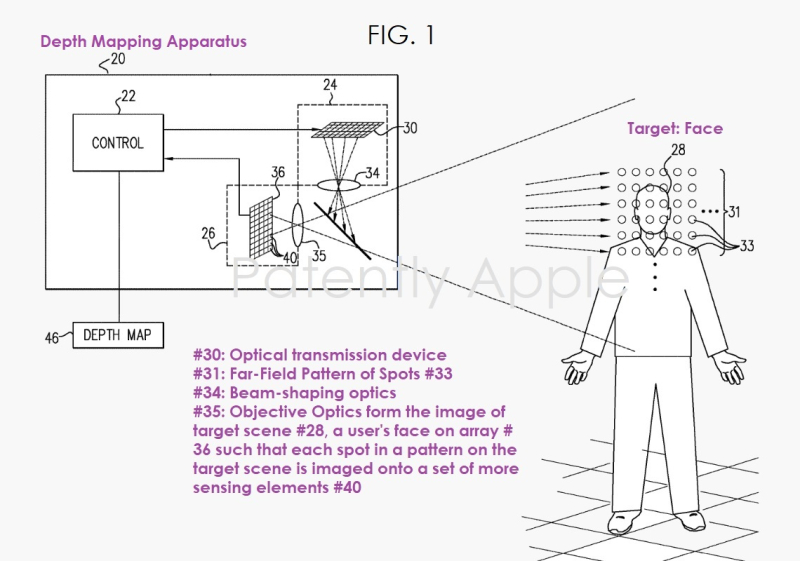