Home Archives Contact Us Subscribe Twitter MeWe Facebook Patently Mobile
Apple's First-Gen Mixed Reality Headset is to Introduce Breakthrough Display Technology
Although Samsung announced that their Galaxy Watch5 offers a temperature sensor to get ahead of Apple, it's yet to receive Government Approval 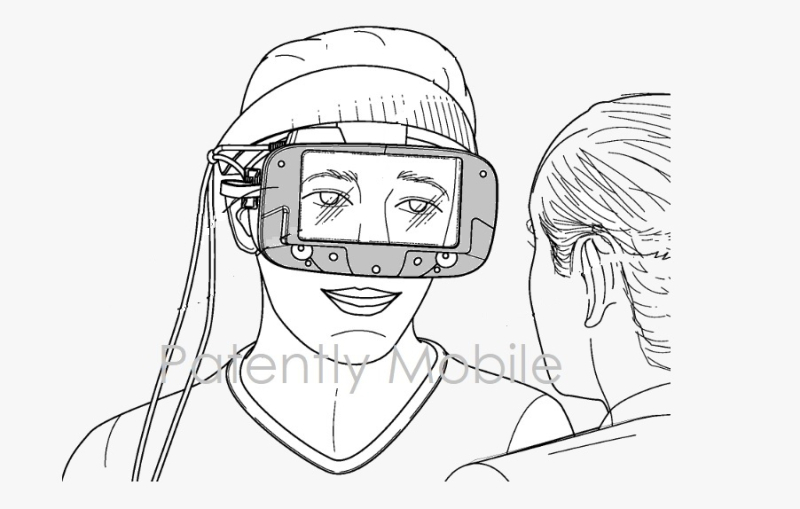 As Apple gets closer to launching their all-new first generation mixed reality headset using high-end OLEDoS displays, it's getting exciting for fans. As an IP news site, Patently Apple has covered a wide range of Apple patents on this subject of eyewear (glasses and HMDs), in fact 359 patents to be exact. As Apple gets closer to unveiling their headset, Patently Apple will be keeping a closer look at some of what Apple's competitors are doing in this field under 'Patently Mobile' reports.

In today's report we cover a single interesting patent from Google and two from Facebook. If this segment of technology is of interest to you, then you just might want to see what Apple's competitors are up to.

Google's European patent application WO2022164572 relates to their future smartglasses device integrating microphone beam forming which is a technique for increasing a receiving sensitivity of a microphone array in a particular direction (or directions), as compared with other directions.

Accordingly, Google's devices and methods will provide an adaptive beamforming technique for a head-worn microphone array that can adapt to (i.e., is tolerant of) changes in the user’s head position/orientation.

Google's solution may have the technical effect of improving a quality of the audio captured by the head-worn microphone array while providing a user more freedom of movement.

Adaptive beamforming may also have the technical effect of providing a layer of privacy. For example, beamforming can maintain the focus of the microphone array on a specific person in conversation with the user and prevent the amplification of audio received from bystanders.

In Google's patent FIG. 2 below you'll see a perspective view of their proposed smartglasses configured to generate beamformed audio. Patently Apple has added a detailed breakdown of the important components of the smartglasses as per their patent specifications. 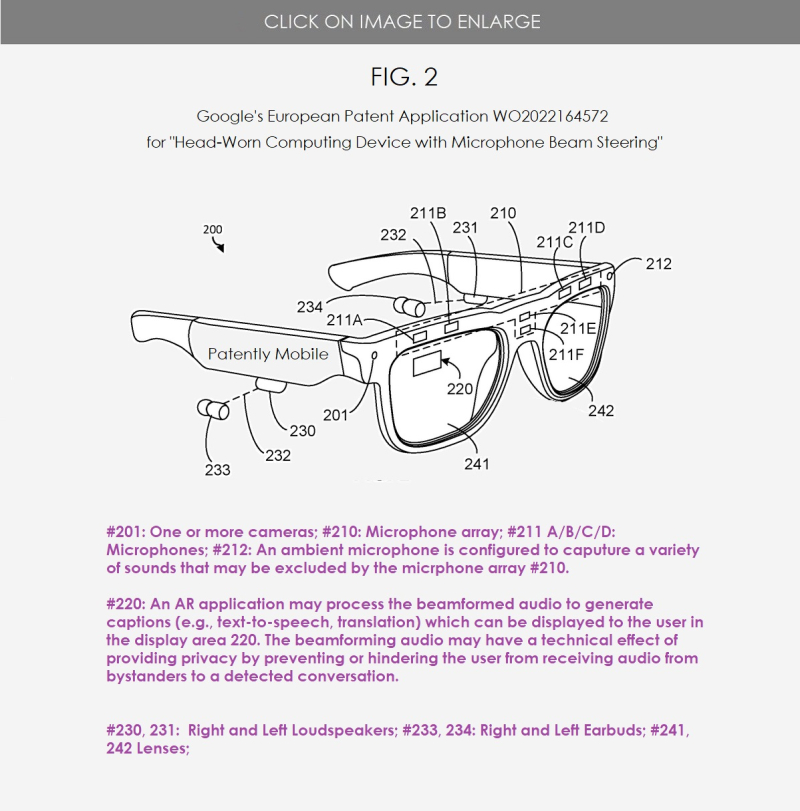 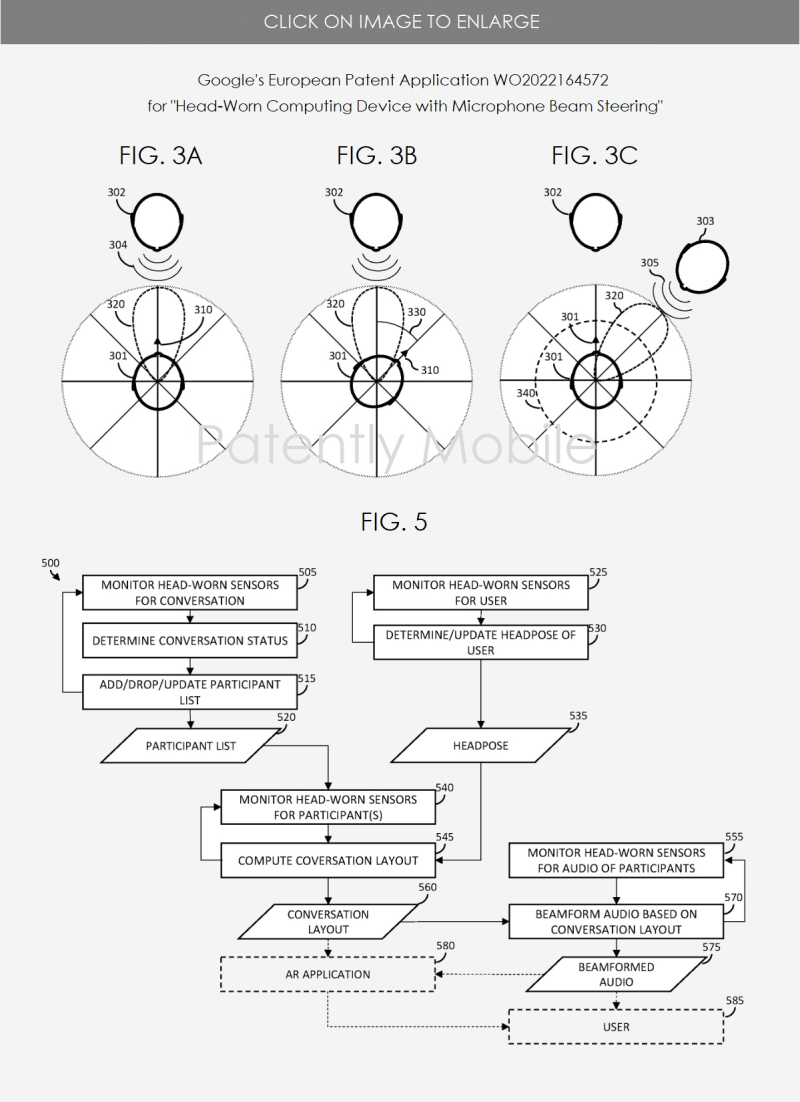 Google's patent FIG. 5 above is a flowchart of a method for generating beamformed audio based on a conversation layout according to a possible implementation. For more details, review Google's patent application here.

Two somewhat interesting headset patents from Facebook came to light between June 30 and July and August 06 and briefly highlighted below. 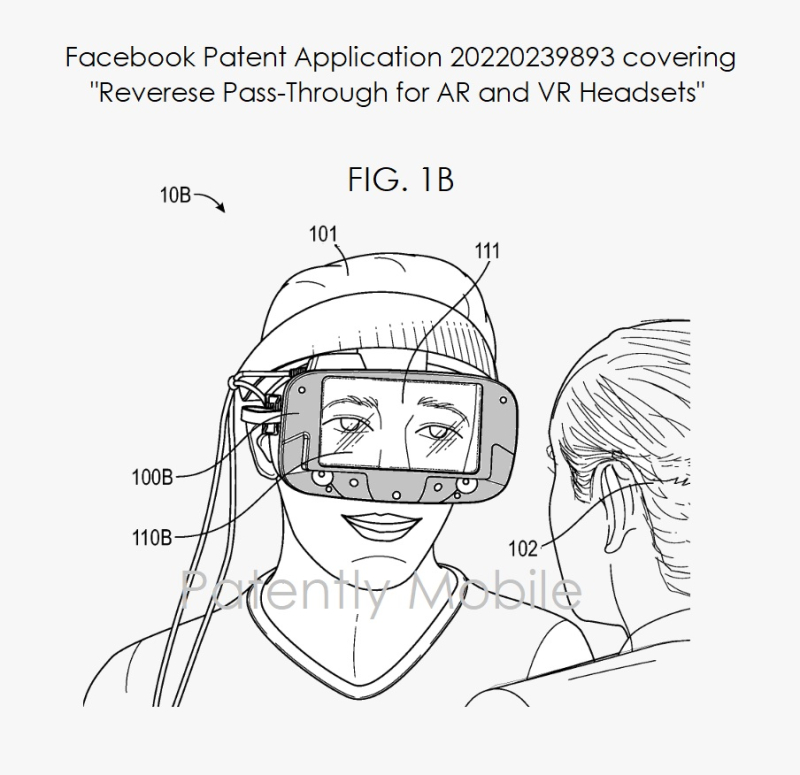 Controllers may generally be used by the user to interact within the virtual environment. Though, in some instances, allowing users to utilize one or more body members (e.g., hands) to interact within virtual environments may enhance the user's virtual reality experience, particularly with respect to, for example, first-person point of view (POV) virtual video games.

However, due to a lack of any positioning data being received by the virtual reality device from the body member of the user, certain movements or hand gestures may be difficult to track and determine by the virtual reality device. For example, if the user were to gesture in mid-air to manually interact with a virtual user interface, the user's hand tremors, hand jitters, and more generally any hand motional pattern or hand movement pattern that may be associated with a particular user would prevent the user from providing a command or selection within the virtual reality environment.

It may therefore be useful to provide techniques to learn user-specific motional patterns and stabilizing hand gestures in artificial reality environments. 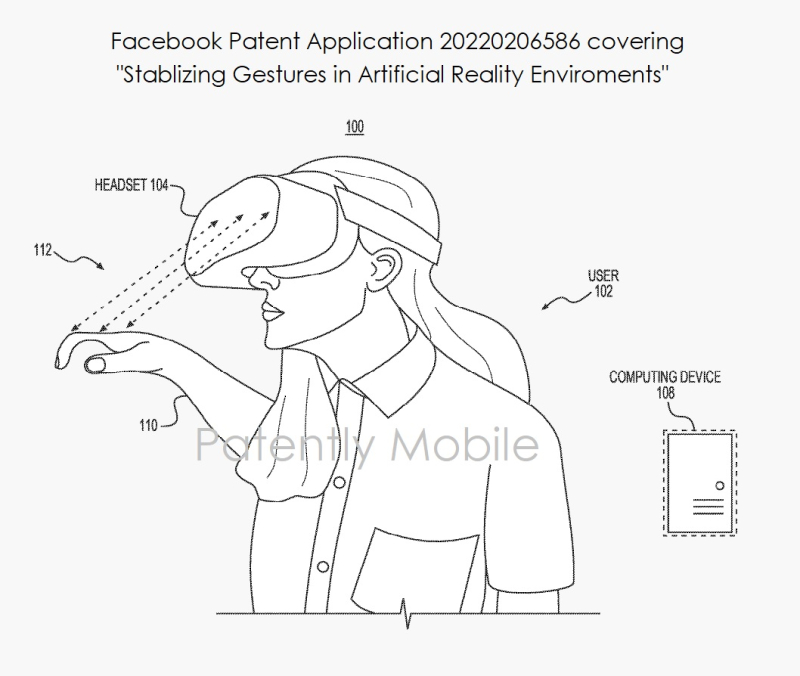