Home Archives Contact Us Subscribe Twitter Facebook Patently Mobile
Analyst Ming-Chi Kuo states that while Satellite Communication was one of the iPhone 14's test items, the business model is still in question
Apple has Won a Technical VR/AR Patent Relating to Skeletal Deformation of Object Joints 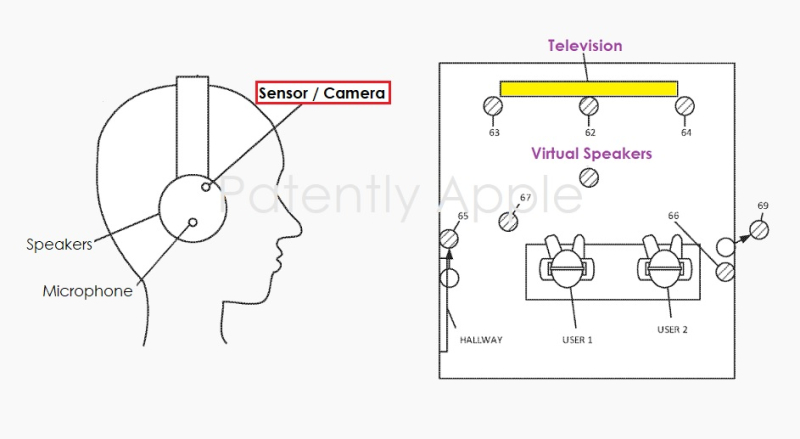 Today the U.S. Patent and Trademark Office officially granted Apple a patent that relates to audio processing with virtual speakers. More specifically, Apple's patent reveals that in the future, cameras could be integrated into both AirPods Max and the Apple TV box so as to ascertain the appropriate positioning of virtual speakers within a given room.

Locations of the virtual speakers can be tailored to a user's setup, for example, a television size, television location, and listening area (which can include geometry of a room that the television is located). An estimated location of the user can also factor into where the speakers are placed. For example, if a user's sitting position can be estimated, then virtual speakers that might be dedicated to surround sound can be placed at the user's side or behind the user. Based on analysis of such factors, locations of virtual speaker locations can be assigned and/or optimized in a manner that provides a positive experience to the user.

For example, if the TV is within view of the sensor and contained in the image, the location and angle of the television can provide a reference to determine the position of the user's head. Other objects or patterns recognized in the image data can also be used as reference.

A spatial renderer #50 can spatialize audio signals received from an audio content source (#40 Apple TV, #90 in FIG. 5). The content source can be a media player, a media server, a computing device, or other content providing means. 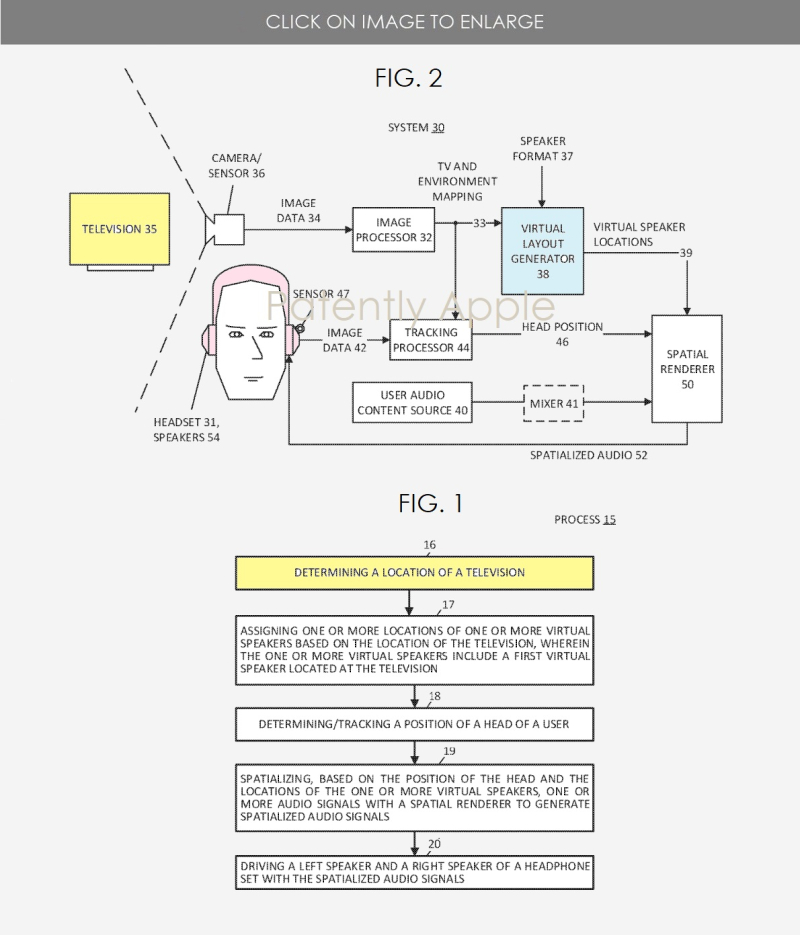 In one aspect, the process shown in FIG. 1 above can be repeated for multiple users in the same listening area. For example, separate sets of one or more virtual speakers can be generated and assigned to multiple users, each wearing a headphone set.

For example, FIG. 3 below shows user #1 that can be listening to virtual speakers 63, 62, 64, 65 and 66 which have been generated for user 1. A second user (user #2) can have assigned a separate set of virtual speakers having the same location (e.g., 63, 62, and 64) but also having different assigned locations such as speakers 67 and 69. The heads of users 1 and 2 can be tracked independently to continuously update the spatializing of the audio signals of user 1 and 2, independently. Apple's patent FIG. 5 above illustrates system hardware such as AirPods Max headphones, iPhone/iPad, Television, Apple TV box. Apple notes that the definition of a "television" can be expanded beyond a standalone TV.

"A 'television' shall be regarded as interchangeable with a laptop having a display, a tablet computer, a projected display projected onto a surface by a projector, a computer monitor, or other devices with display means. All aspects discussed with regard to a 'television' also apply to these other forms of 'television.'"

Apple's patent FIG. 5 also reveals that future versions of both AirPods Max and Apple TV could integrate cameras so as to ascertain where the best positioning of virtual speakers in room should be.

In the future, it would appreciated if AirPods Max allowed two people in a room watching a show on TV to be able to communicate with each other without having to pause the show or remove the headphones. Intercommunication between headphones would be a very appreciated feature.