Home Archives Contact Us Subscribe Twitter MeWe Facebook Patently Mobile
U.S. Judge has warned Apple of sanctions for misuse of court rules in their ‘Emergency Motion’ Relief against Ericsson
Apple Landed the rights to the book ‘The Wager: A Tale of Shipwreck, Mutiny and Murder’ with Leonardo DiCaprio & Scorsese on the project 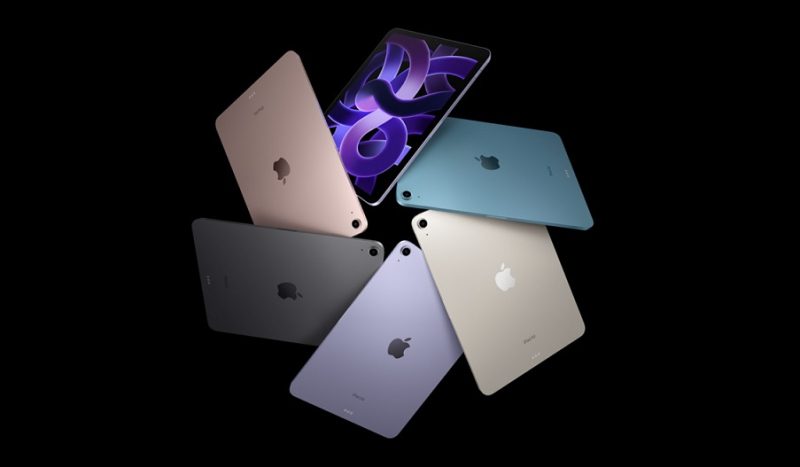 Apple’s CFO added that “iPad revenue was $7.2 billion, down 2% year over year due to supply constraints and negative foreign exchange. Customer response to our iPad lineup continue to be strong across consumer, education, and enterprise markets around the world. And the iPad installed base reached a new all-time high, with over half of the customers during the quarter being new to the product.”

As shown in IDC’s chart below, Apple held on to first place with market share only dropping 1% over the same period last year and that’s only because of supply constraints that their CFO reported yesterday. 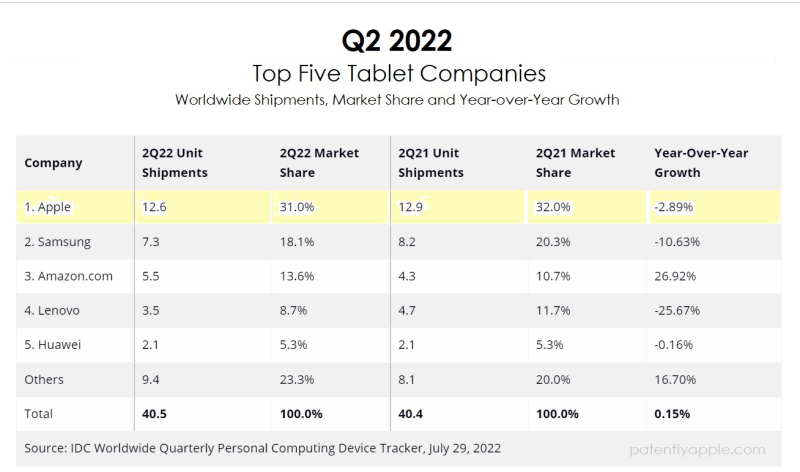 Samsung fell 2.2% over last year and Lenovo’s declined 3% in Market Share marking a --25.67% year-over-year growth. For more on this, read the full IDC Tablet report.

During Apple’s Financial Conference Call yesterday, Apple’s CEO Tim Cook stated at one pont: “Turning to iPhone. We set a June quarter record for both revenue and switchers to iPhone. With its advanced performance, capability and ease of use, customers continue to find that iPhone remains the gold standard for smartphones.”

Apple’s CFO added specifics: “iPhone revenue grew 3% year over year to a June quarter record of $40.7 billion despite foreign exchange headwinds as customer response to our iPhone 13 family continue to be strong. We set June quarter records in both developed and emerging markets. And the iPhone active installed base reached a new all-time high across all geographies as a result of this level of sales performance combined with unmatched customer loyalty.” 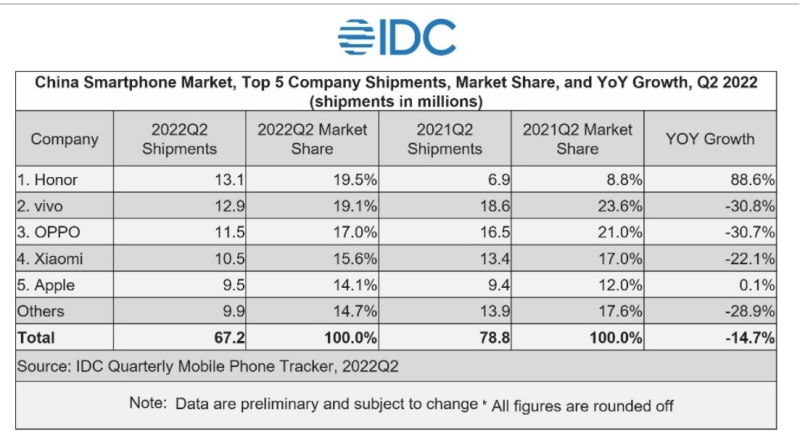 IDC: “Apple’s iPhone 13 was the volume driver in the quarter as the company significantly lowered the model’s pricing in channels like JD.com while also reducing the mix of its predecessor in the online “6.18” festival. The iPhone 13 accounted for more than 60% of Apple’s shipments, which in turn, helped the vendor to achieve a flat growth from a year ago.