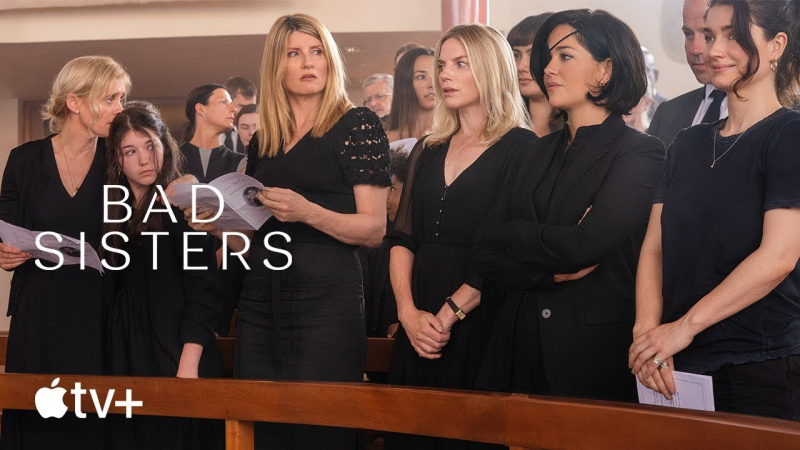 This morning, Apple TV+ unveiled the trailer for its new witty and darkly comedic murder mystery series “Bad Sisters," the latest comedy from Emmy Award nominee and BAFTA Award-winning creator and star Sharon Horgan. The 10-episode series will debut globally with the first two episodes on Friday, August 19, followed by one new episode weekly every Friday through October 14 when bingers will be able to watch the whole series in one sitting.

The tight-knit Garvey sisters have always looked out for each other. When their brother-in-law winds up dead, his life insurers launch an investigation to prove malicious intent — and set their sights on the sisters, all of whom had ample reason to kill him. In addition to Horgan, the "Bad Sisters” ensemble cast is led by Anne-Marie Duff, Eva Birthistle, Sarah Greene and Eve Hewson as the Garvey sisters. Claes Bang, Brian Gleeson, Daryl McCormack, Assaad Bouab and newcomer Saise Quinn round out the ensemble cast.

In other news, Deadline’s new segment called “The Dish,” reports that “As the fall festivals lock in final choices that will drive the upcoming awards season, there is big intrigue on two films from reigning Best Picture winner Apple that might fill in some blind spots on the race. The Dish hears that Killers of the Flower Moon, the Martin Scorsese-directed adaptation of the David Grann book that figured to be a strong contender for all the top Oscar categories, it will skip this Oscar race.

The alternative plan discussed: the film that teams Leonardo DiCaprio and Robert De Niro will get a global showcase premiere at the 2023 Cannes Film Festival next May. And in a development that could be a future template for streamers look to recoup some of the mega-budgets of the event films they’ve been making, Killers of the Flower Moon would roll out with a full-blown theatrical release through Paramount, a studio that was always part of the deal.

Secondly, the film Emancipation may be scratched from the upcoming awards-season race because of last year’s Best Actor winner Will Smith’s moment of Oscarcast infamy. For more rumors on Emancipation, read the full Deadline report.