Today the U.S. Patent and Trademark Office officially granted Apple a patent that relates to possible next-gen keyboards for MacBooks and Mac desktops that could provide users with unique adjustable keys that could be applied automatically or otherwise tuned based on user preference.

Apple notes in their patent background that conventional input devices, such as keyboards, are typically static. As such, a user cannot adjust the feel and/or travel of a translatable input mechanism of the input device (such as a key or button). Typically, different users have different typing preferences based on their hand size, gender, typing style and so on. However, because the feel and/or travel of the translatable input mechanism of the input device is static, the user may have to settle for an input device that does not match their typing preferences.

The input device of the present disclosure may include a sensor that determines one or more input characteristics associated with a user of the input device.

In one example, the sensor may be a light sensor that measures a change in detected light as the user moves his fingers and hands over the input device. This information may be used to determine the relative hand and/or finger size of a user and/or preferred hand/finger placement on the input device.

In another implementation, the sensor may be a capacitive sensor that measures a change in capacitance between a user's fingers and/or hands and the input mechanisms of the input device.

In some embodiments, an input signal provided by the input mechanism when it is actuated may be used to determine the speed at which the user is providing input.

In order to effect the changes described above, each input mechanism (key) of the input device may include one or more magnetic components. Apple’s patent FIG. 14 below illustrates fifth example arrangement of various components of an electromechanical system. In this example, the electromechanical system 1400 includes any number of coils labeled in FIG. 14 as 1410, 1320 and 1430. Although three coils are shown, fewer or more coils may be used; FIG. 15 illustrates a sample cross-section view of an input mechanism of the adjustable input device. 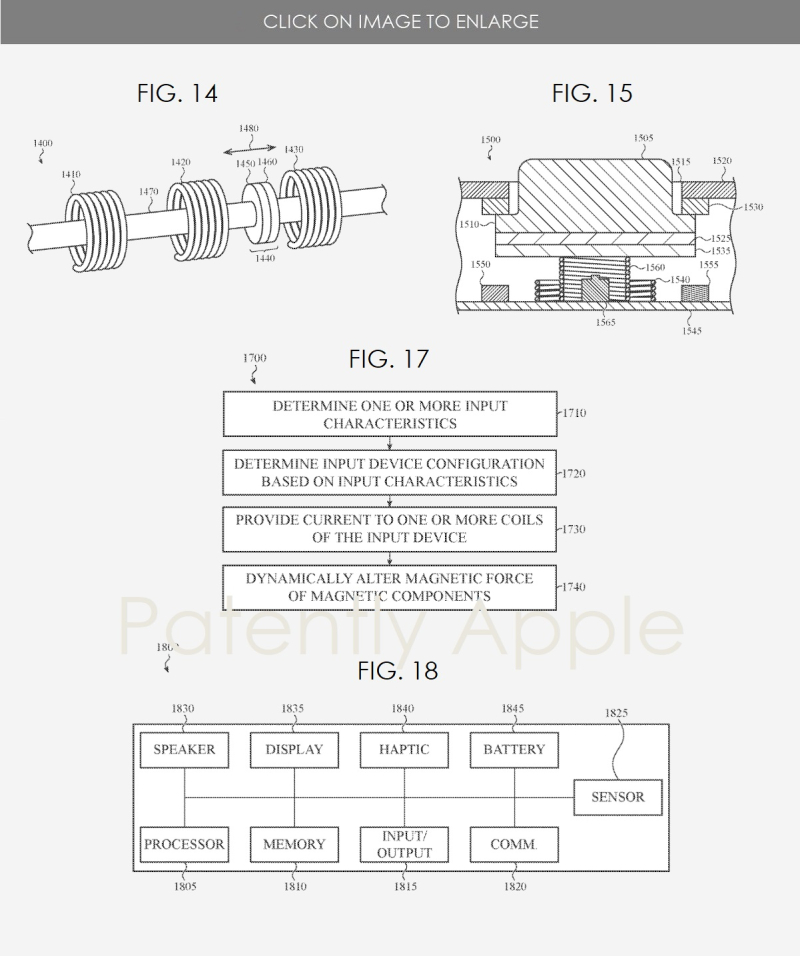 For more on this, review Apple’s granted patent 11,394,385 that bypassed the application phase publicly. Meaning, this is the first time this invention has been made public.

I think that this is a great idea. I prefer the feel of my new Logitech keyboard and my wife prefers our mechanical keyboard with high keys that clatter. Being able to control the feel of your keyboard keys could be a great feature to look forward to in the future.

What are your thoughts on this? Send in your comments below or on our Twitter feed.