Lawful interception (LI) functionality refers to the legally approved surveillance of telecommunication services. It has become an important tool for law enforcement and intelligence agencies around the world for investigating and prosecuting criminal activities and terrorist operations.

Yesterday, the U.S. Patent and Trademark Office officially granted Apple a patent that relates to Lawful Intercept (LI) services for iPhones and other mobile communication devices such as Apple Watch, MacBooks and iPad.

Described techniques in Apple’s granted patent may enable Lawful Intercept (LI) services for iPhones in situations where at least one iPhone is participating in Proximity Services (ProSe) such that the iPhone (User Equipment – UE) is "indirectly" coupled to a cellular network via a relay device.

As an example of this situation, a group of public safety personnel (e.g., firefighters) may be first responders at an accident. UEs of one or more members of the group may be out of the coverage range of the cellular network used by the group (e.g., some of the members may be indoors, in a tunnel, etc.). The members of the group may continue to communicate with one another and with the cellular network using ProSe communications services.

In some situations, such as in the case of Internet Protocol (IP) version 4 addressing (IPv4), the UE acting as the relay device may use Network Address Translation (NAT) techniques when relaying traffic. NAT may obscure visibility, from the standpoint of the cellular network, about which traffic flows correspond to the relay UE and which traffic flows correspond to the remote UEs. This can be problematic for the performance of lawful intercept services.

Consistent with aspects described in Apple’s granted patent, the relay device may assist in enabling lawful intercept by reporting, to a LI device associated with the cellular network, authenticated identities of the remote UEs and identification information that may allow the LI device to monitor traffic (and/or control statistics related to the traffic) associated with the remote UEs. 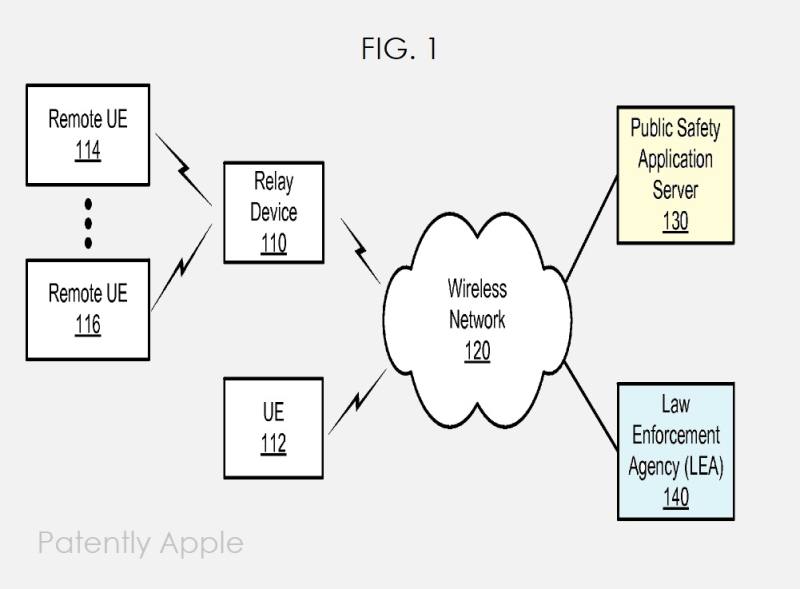 During 9/11 many first responders were unable to communication with commanders and missed important flashpoints that could have saved lives. Since that time various governmental Agencies came up with communication standards working with networks and device makers. Below is a video snippet from Dereck Orr, Chief Public Safety Communications Research (PSCR) Division of NIST.

Apple’s granted patent covers specific communication systems for an iPhone to access the Public Safety Application Server and to be in compliance with standards related to Law Enforcement Agencies (LEAs).

For more on this, especially for wireless engineers, read Apple’s full granted patent 11,394,454.