Unsurprisingly, the Seriously Hyped-Up Dual Camera Smartwatch from Meta (Facebook) has been cancelled until further notice 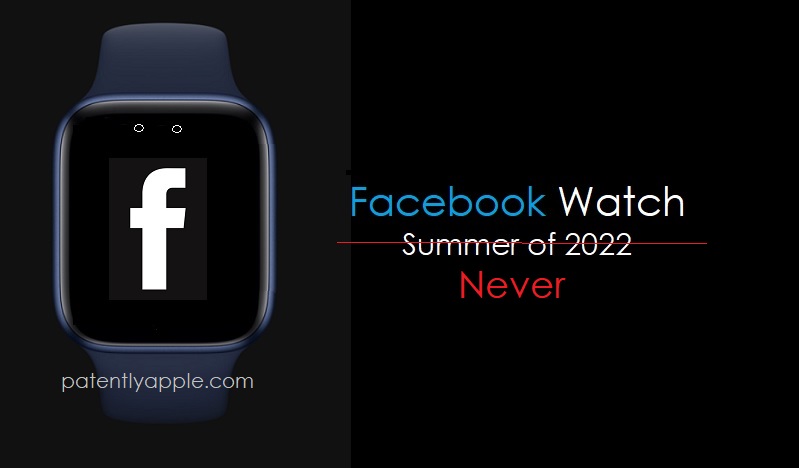 Last June Patently Apple reported on the Facebook leak that their first smartwatch to take on Apple Watch was due to arrive in the summer of 2022. Earlier in March 2022, we reported on Facebook’s initial work on wrist-based input devices that will reportedly work with Facebook AR glasses. So bringing a tamer smartwatch to market first made sense. The Verge reported that the new smartwatch would feature dual cameras, when Apple has yet to introduce a camera for Apple Watch that they’ve patented in 2016.

It's being reported today by Bloomberg that that Meta (formerly Facebook) has halted development of their hyped dual camera smartwatch.

Bloomberg’s Kurt Wagner reports that “The device, which has been in development for at least two years, was designed to include several features common in other smartwatches, including activity tracking, music playback and messaging. A prototype of the now halted device includes dual-cameras, a key differentiator from market leaders like the Apple Watch. One camera was located below the display and another sat on the backside against the wearer’s wrist, according to images and video of a prototype seen by Bloomberg.

The second camera was designed so users could remove the watch face from its strap to quickly take pictures. But the presence of the camera caused issues with another feature for translating nerve signals from the wrist into digital commands, the person said. Having that technical ability, known as electromyography, is a top priority for Meta” and covered.

Meta executives have discussed the potential of smartwatches as part of its vision for the so-called metaverse, an immersive version of the internet where people will interact with other users as digital avatars. Sensors within wrist devices could be used to help people control their avatar, or interact with what they observe through a pair of augmented reality glasses, for example.

Despite the dual-camera device being halted, Meta is still working on multiple other wrist-worn devices. Employees working on the watch, code-named Milan, were told this week that the device is no longer on track for production, the person said. It was originally targeted for release in spring 2023 at price point around US$349." Of course, it was originally set for this summer as we reported last year.

Bloomberg further noted that "This week, Meta also told employees that it won’t be selling a version of its AR glasses that have been in development for three years, the person said. The company has shifted focus to a later version of those AR glasses, with plans for an eventual commercial release." For more, read the full Bloomberg report.

While there’s more to the Bloomberg report, Meta (Facebook) has a history of hyping vaporware to keep Wall Street analysts and the tech world engaged with the company. It's all becoming oh-so boring. Is it disappointing that their first smartwatch has been cancelled? Not in the least, because most of us never thought that they were seriously bringing it to market to begin with. For many, Facebook = Vaporware. Maybe one day that image will change.