Contrary to the facts known so far, Volkswagen’s CEO Bizarrely believes that Apple’s Project Titan is going to be limited to Software

Earlier today, Volkswagen CEO Herbert Diess said he wasn’t sure that Apple is planning to produce cars. In fact, he thinks that Apple certainly wants to provide software for cockpits. "I'm not sure if Apple will actually bring cars to the market in the end. It would be a big effort.”  Reuters

As the opening keynote speaker at hub.berlin technology conference, Diess took advantage of Apple’s WWDC22 revelation about the next-level of CarPlay coming in 2023-2024 to limit Apple's vehicle aspirations.

Emily Schubert, Senior Manager, Car Experience Engineering, spoke about CarPlay introducing software for a new instrument cluster and listed the car companies that would be participating as presented below. Interestingly enough, Volkswagen didn’t make it on the list. 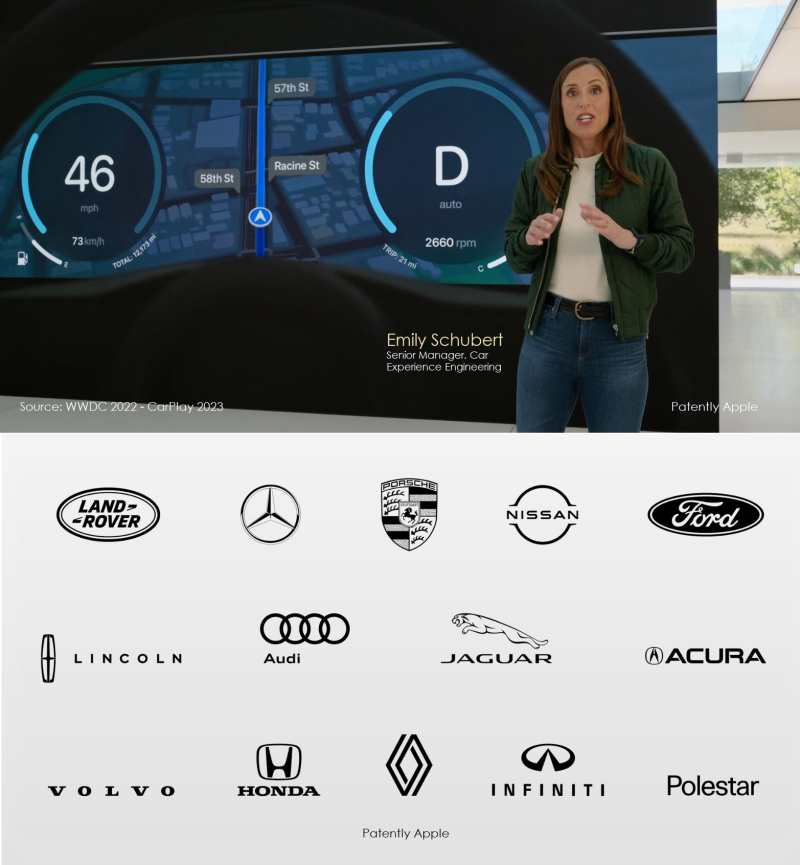 Diess was capitalizing on low hanging fruit that was in the press to play up for his keynote. That’s what the general public may have vaguely heard about coming out of WWDC22. Yet Patently Apple has reported on 125 Apple Patents relating to their vehicle project known as Project Titan and not one patent surfaced about an instrument cluster as of yet.

I’m sorry to say that the Volkswagen CEO sounded ignorant of Apple’s work costing tens of millions of dollars in research for future vehicles on systems beyond software. They’ve also had at least two of their engineers arrested for stealing Project Titan vehicle secrets. I highly doubt that was all about stealing secrets for a vehicle instrument cluster.

If it was only about software, then why did Apple hire Desi Ujkashevic with 31 years experience at Ford; Dr. Manfred Harrer, head of chassis development at Porsche and one of the best engineers at Volkswagen; or Dr. Anton Uselmann whose experience is in steering systems at Porsche? For the development of an instrument cluster?

Apple’s long list of patents and high-level hiring over the years just doesn’t add up to Project Titan being limited to vehicle software. Then again, only time will tell if Diess is a prophet or a CEO simply trying to plant Fear, Doubt and Uncertainty (FUD) in the press as a propaganda tactic against Apple's Project Titan. In the end, it’s going to be one or the other.

In some ways comments by Diess remind me of Microsoft's CEO Steve Ballmer  and  Palm's CEO Ed Colligan laughing off Apple's entry into the phone market. The take away: Never, ever, underestimate Apple.