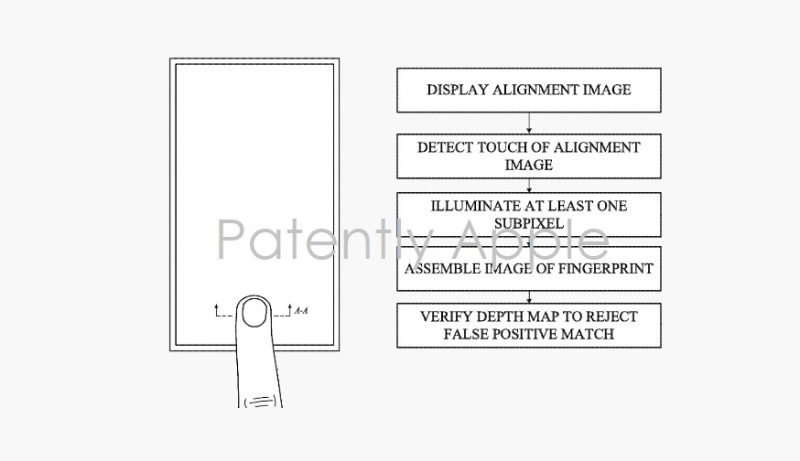 Although there have been rumors that Apple has abandoned under display Touch ID, Apple continues to work on their patented invention that not only covers Touch ID under the display but also iris imaging and Face ID under the display. In April, Patently Apple posted an IP report titled “Apple wins a patent for Killing the Notch and placing their TrueDepth camera system behind the Display so as to not interfere with content.” Apple will need to execute today’s invention or one like it to ensure that Face ID continues to function under an iPhone display.

In many embodiments, an optical imaging array is positioned behind a display and is oriented to receive light transmitted through the display in a direction generally opposite that of light emitted from the display.

The optical imaging array can be used by the electronic device for any suitable imaging, sensing, or data aggregation purpose including, but not limited to: ambient light sensing; proximity sensing; depth sensing; receiving structured light; optical communication; proximity sensing; biometric imaging (e.g., fingerprint imaging, iris imaging, facial recognition, and so on); and the like.

In some cases, the active display area #602 can display an image or animation that encourages the user to touch a particular part of the low pixel density region #606 in order that the user's fingerprint can be captured.

For example, in some embodiments, the active display area can display a shape within the low pixel density region #606. The shape may be animated in a manner that draws the user's attention. For example, the shape can pulse, rotate in three dimensions, flash one or more colors, vibrate, and so on. In other cases, other shapes, patterns, or animations are possible.