Apple wins a patent for In-Air Micro-Gesturing to control User Interfaces for Macs, iDevices and their future Mixed Reality Headset 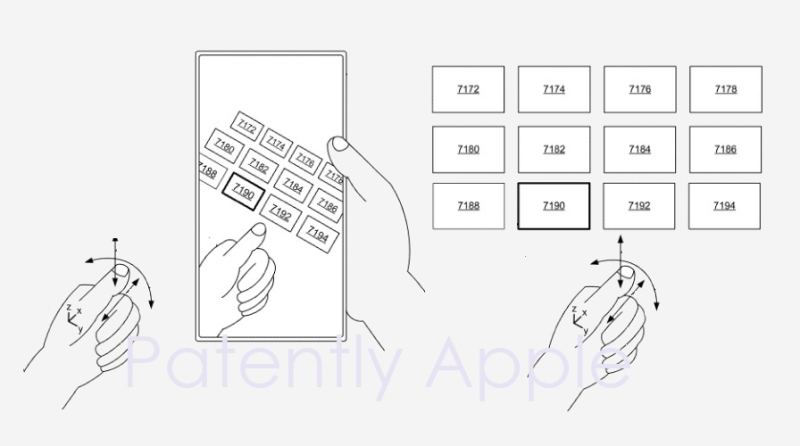 Today the U.S. Patent and Trademark Office officially granted Apple a patent that relates to computer systems with a display generation component and one or more input devices that provide computer generated experiences, including but not limited to electronic devices that provide virtual reality and mixed reality experiences via a display. In large part, Apple's invention dives into a future Mixed reality Headset that will work in conjunction with micro hand gestures and eye tracking that could be useful in playing video games, in navigating menus and controlling media playback.

In some embodiments, a computer system allows a user to use micro-gestures performed with small movements of fingers relative to other fingers or parts of the same hand to interact with a three-dimensional environment (e.g., a virtual or mixed reality environment).

The micro-gestures are detected using cameras (e.g., cameras integrated with a head-mounted device or installed away from the user (e.g., in a CGR room)), e.g., as opposed to touch-sensitive surfaces or other physical controllers.

In addition, micro-gestures are discrete and unobtrusive, and are suitable for interactions that may occur in public and/or require decorum.

Apple's patent FIG. 4 below illustrates hand tracking unit #243. In some embodiments, an eye tracking unit is configured to track the position and movement of the user's gaze in respect to the user's hand. Patent FIG. 4 further includes a schematic representation of a depth map #410 captured by the image sensors #404.

Patent FIG. 4 also schematically illustrates a hand skeleton #414 that a controller ultimately extracts from the depth map of the hand #40. In FIG. 4, the skeleton is superimposed on a hand background #416 that has been segmented from the original depth map.

In some embodiments, key feature points of the hand (e.g., points corresponding to knuckles, finger tips, center of the palm, end of the hand connecting to wrist, etc.) and optionally on the wrist or arm connected to the hand are identified and located on the hand skeleton #414.

In some embodiments, location and movements of these key feature points over multiple image frames are used by the controller 110 to determine the hand gestures performed by the hand or the current state of the hand. 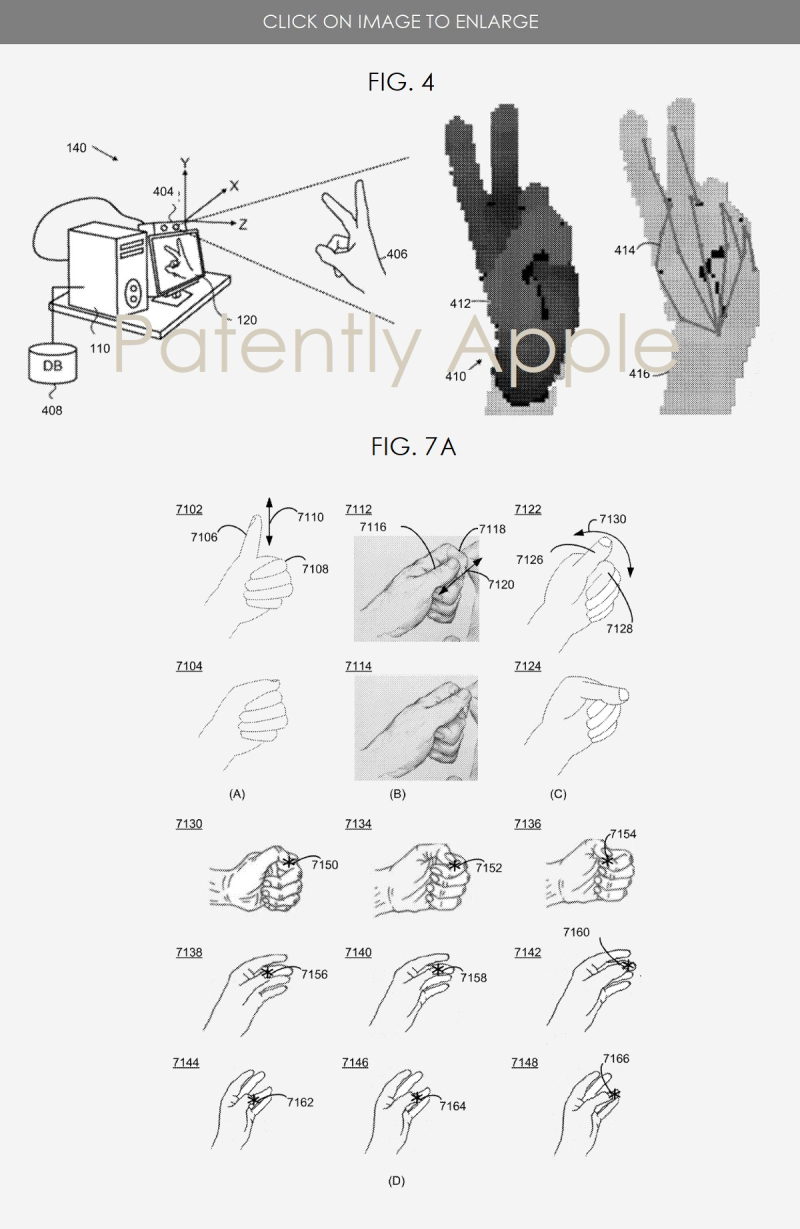 Apple's patent FIG. 7B below illustrates an example user interface context showing menu #7170 that includes user interface objects #7172-7194. The menu is displayed in a mixed reality environment (e.g., floating in the air or overlaying a physical object in a three-dimensional environment, and corresponding to operations associated with the mixed reality environment or operations associated with the physical object); FIG. 7C menu 7170 is displayed by a display of a display of a device (e.g., device 7100 (FIG. 7C) or an HMD) with (e.g., overlaying) at least a portion of a view of a physical environment captured by one or more rear-facing cameras of device #7100. In some embodiments, the menu is displayed on a transparent or semi-transparent display of a device (e.g., a heads-up display, or an HMD) through which the physical environment is visible. 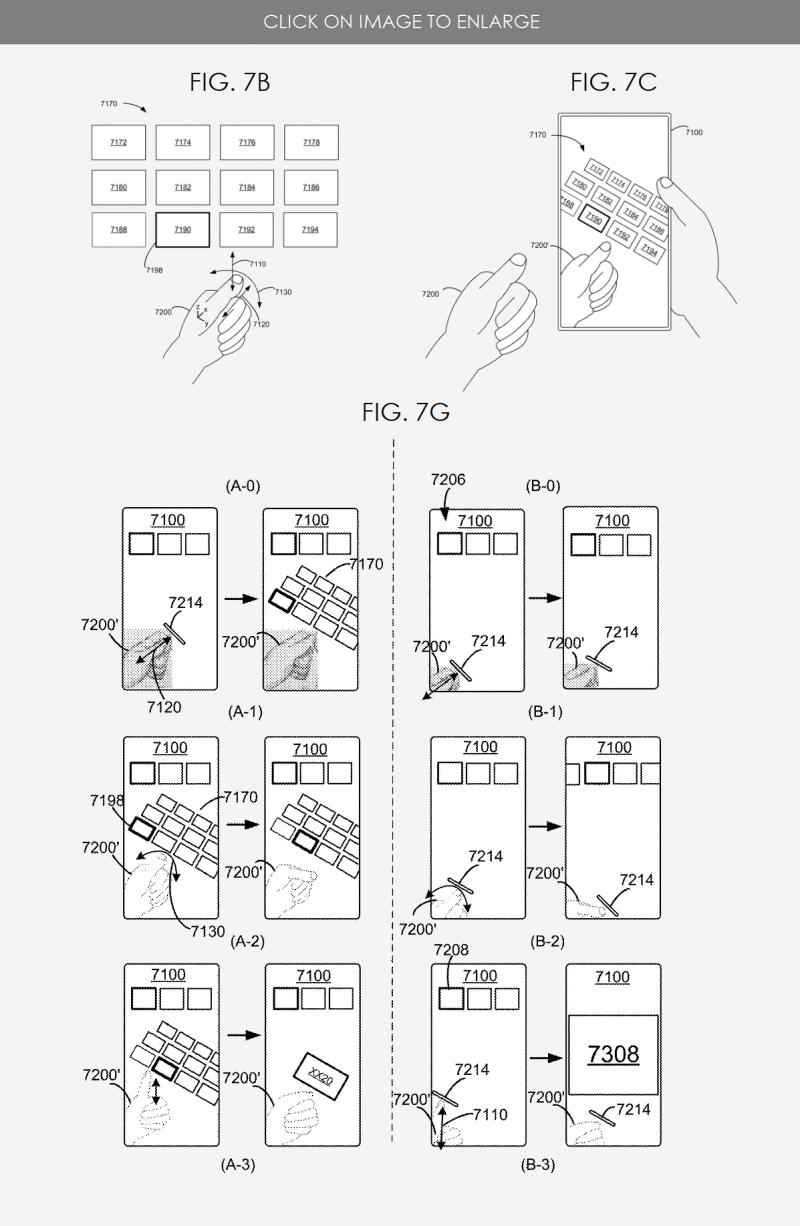 Apple's patent FIG. 7G above illustrates example gestures performed with a hand in a ready state and example responses of a displayed three-dimensional environment that are dependent on a user's gaze.

In some embodiments, the user's gaze directed to a virtual object in a three-dimensional environment that is responsive to gesture inputs causes visual indication of one or more interaction options available for the virtual object to be displayed only if the user's hand is also found to be in a predefined ready state for providing gesture inputs.

Other recent reports on this subject matter from Patently Apple:

May 19: Apple Invents a new Hand Gesture Tracking System based on Event Camera Data and more

May 14: Hand-Tracking Technology to be used in controlling Future MR Headset User Interfaces is Closer to Market than you Think

April 21: A new Apple Patent deeply describes the use of In-Air Gesturing to control a new kind of Mixed Reality Headset Interface