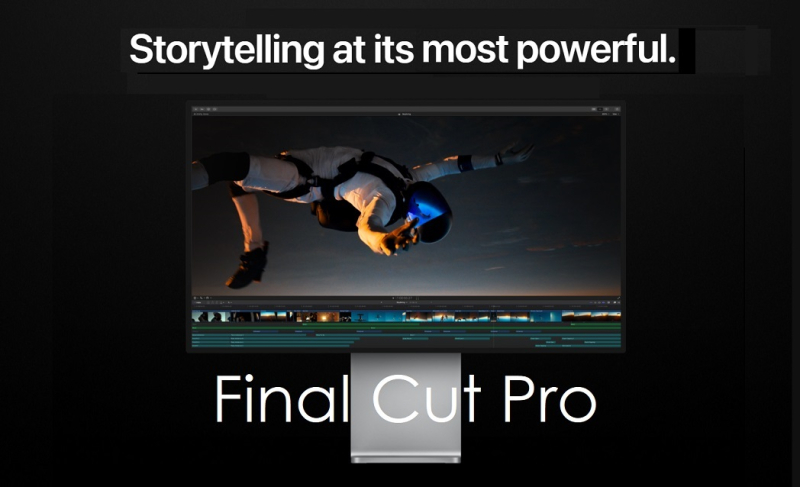 A month ago today an open letter was sent out to Tim Cook that was signed by 112 TV and Film Production professional that depend on Final Cut Pro around the world. The open letter was aimed at the executives who set the priorities of the Final Cut Pro development team and the Apple managers whose policies limit the public marketing of Final Cut Pro to a couple of website updates a year and some mentions in Apple keynotes about how much faster Apple hardware is getting.

We are professionals working in Hollywood and other high-profile movie and TV markets all over the world. We are excited by Final Cut Pro. We think that it is the biggest leap forward in editing technology since the move to digital. We think it’s incredible.

We also think it’s incredible that some of us still can’t choose it to do our work. Work that could easily include productions for your very own Apple TV+ service.

Final Cut Pro is a wonderful application used by many YouTubers, education and small business content creators worldwide. We know why it is successful. It is liberating, efficient and fun to work with. But, unfortunately in professional film and TV, editors who use Final Cut Pro are a tiny minority.

We ask Apple to promote Final Cut Pro publicly and add the few remaining features that our industry has consistently stated are needed.

We'd love to see Apple publicly support and certify the suppliers of the third-party products and services we use to integrate Final Cut Pro into industry-standard workflows.

We also hope to see Apple ensuring that improved Pro Apps support is widely available and that Final Cut Pro can also be bought through current industry suppliers. This is is essential for big productions to accept Final Cut Pro as legitimate.

If Apple renewed its public commitment to the professional filmmaking industry and its visionary product, we believe an increasing number of editors would discover the joys of using Final Cut Pro.

We hope you will start showing that Apple aims to make Final Cut Pro the best application for editing TV and movies. We believe that this could lead to a Pro Apps renaissance as pioneering as your amazing M1 Max MacBook Pros and the M1 Ultra Mac Studio.

It’s wonderful that Apple TV+ has become the first streaming platform to have a Best Picture Oscar winner with CODA, but it’s disappointing to know that Final Cut Pro is so unlikely to have been a possible choice as the film’s editing app.

We hope you will encourage our industry to see Final Cut Pro as a professional choice for editors of future award-winning TV shows and movies, and for millions more editors all over the world.

Galliano Olivier, editor of ‘Marianne,’ a French TV drama series edited in Final Cut and distributed by Netflix says "In France, it is extremely difficult to get permission to edit TV with Final Cut Pro. You can’t use it without fighting producers, directors, post-production supervisors, sound editors, etc..."

Knut Hake BFS, editor of ‘Blood Red Sky,’ a feature film distributed by Netflix and edited using Final Cut Pro commented, "I think it would make a big difference for workflow consultants, systems integrators and third-party developers if there was a public Beta program for Final Cut Pro. Apple already does it for iOS, macOS and even Safari. It would make Final Cut more reliable and make it much easier for people to fit Final Cut into their plans for the future."

Vanessa E. Brogna, assistant editor of ‘Bridgerton’ one of the top TV shows on Netflix commented: "Final Cut Pro is my favorite NLE. It's an absolute powerhouse and I feel the most creative and productive. Doing one step in Final Cut is about 3-4 in other NLEs. However, the real magic of Final Cut is its free form style of editing. Editing on a magnetic timeline is streamlined and smooth so I can still be organized, but I'm able to spend more time experimenting in the edit creatively and finesse my work."

You could view the 112 signatories presented on the open letter and read more of their individual comments here.

Today, Apple responded to the open letter. It was covered by FCP.co's Editor-in-Chief Peter Wiggins and noted below:

To the authors of the recent open letter regarding Final Cut Pro in the TV and film industry: the creative community has always been so important to us at Apple, and we’re grateful for your feedback.

There have been many compelling projects created to date with Final Cut Pro — from Hollywood movies and high-profile commercials, to major television shows and impressive work by the biggest names in online content creation.

While we believe we have plans in place to help address your important feature requests, we also recognize the need to build on those efforts and work alongside you to help support your film and TV projects and keep you posted on important updates. This includes taking the following steps:

We would love to work with you to help support your film and TV projects, and we will continue to explore opportunities that allow us to better connect and foster important dialogue with our devoted community of users going forward.

Perhaps there will be more of a response on this during a Final Cut Pro WWDC 2022 workshop next month.