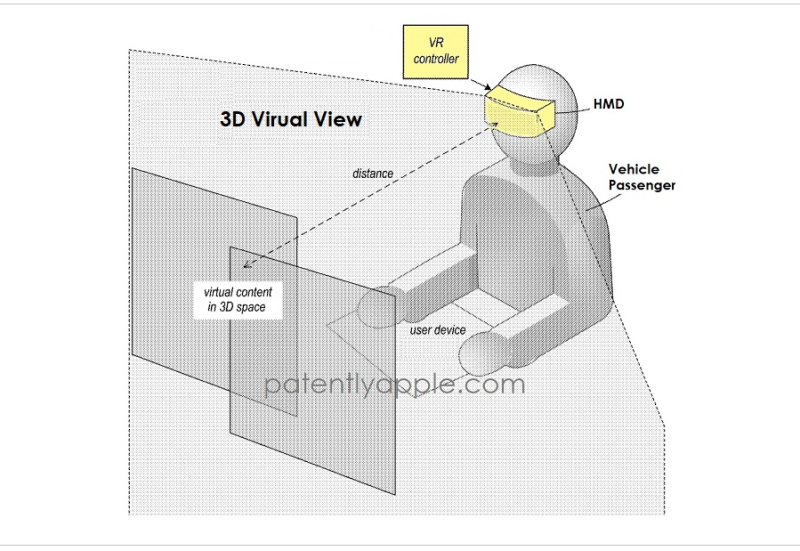 Today the U.S. Patent and Trademark Office officially granted Apple a patent that relates to a VR system for vehicles that may implement methods that address problems with vehicles in motion that may result in motion sickness for passengers. The VR system is designed to be used in autonomous vehicles that have no windows, with the user's VR headset providing them with a view of the road that they're on, if they so choose. The vehicle's VR system will allow users like business executives to hold virtual meetings while traveling to work. Other experiences could involve playing sophisticated VR games while travelling, reading a book or conversing with family as if they were in the vehicle with you.

Apple further describes passengers being able to choose to have relaxing virtual experiences and have the user visualize themselves riding on a boat floating down a river or soaring over the landscape in a hang glider, or exciting virtual experiences such as a car chase or driving through a post-apocalyptic wasteland with zombies attacking, or anything in between.

Passengers will be able to choose to have the virtual experience of riding through another real location, such as the streets of London, or through fictional cities or landscapes.

The virtual experiences may be educational and interactive, for example allowing the passenger to discover history or other information about landmarks in a virtual view of a city that they are experiencing. The virtual experiences may be interactive in other ways, for example allowing a passenger to pass other vehicles during a road race experience, or run over zombies in a post-apocalyptic landscape.

As another example, if the vehicle stops at a red light or for some other reason when fleeing zombies in a post-apocalyptic landscape, the virtual experience may cause the vehicle to appear to stall and not allow the car to be restarted until the light turns green to build suspense.

While not shown, in some embodiments a VR projection device 720 and/or VR controller 710 may include one or more microphones for receiving voice input from passengers; for example, an HMD may include a microphone for receiving voice input from a passenger wearing the device. The voice input may, for example, be used for voice control of the VR system, or for communicating with other passengers wearing HMDs, or for external communications such as phone calls and teleconferencing through the VR controller or vehicle systems.

In addition, in some embodiments a VR projection device and/or VR controller may include or couple to internal cameras or other sensors for detecting motions or gestures of the passengers, for example hand, arm, or head gestures, eye movement, facial expressions, etc. In some embodiments, detected gestures, motions, or expressions may be used as input to the VR system to affect rendering and/or display of virtual content to respective passengers.

Apple's patent FIG. 1 below illustrates a virtual reality (VR) system including a head mounted device (HMD) that may be used by passengers in vehicles, according to some embodiments. 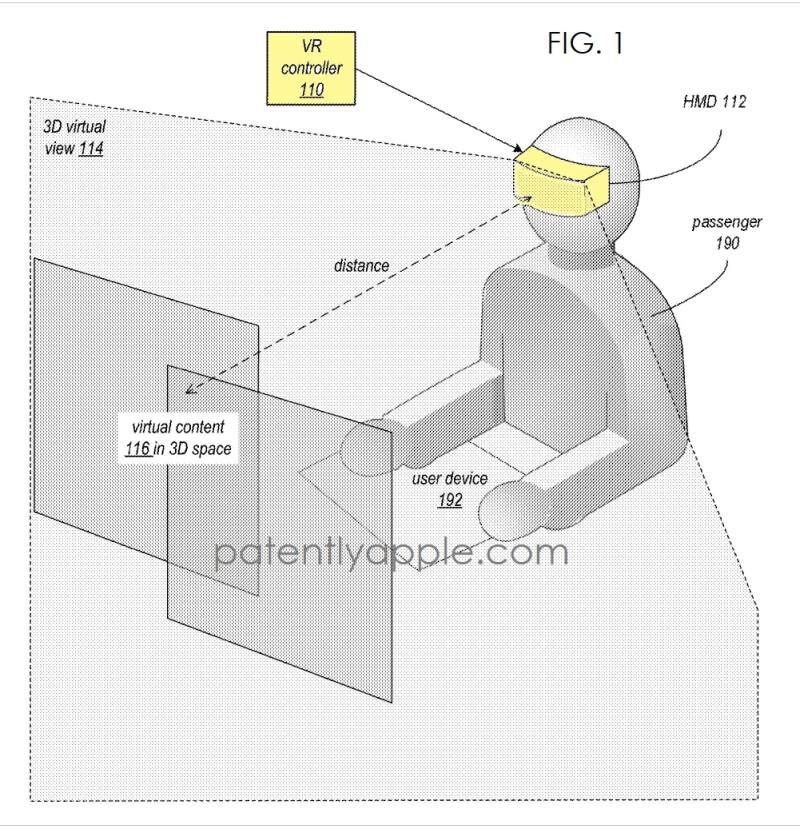 Apple's patent FIG. 2 below illustrates a VR system that projects VR content to a window of a vehicle for viewing by passengers. 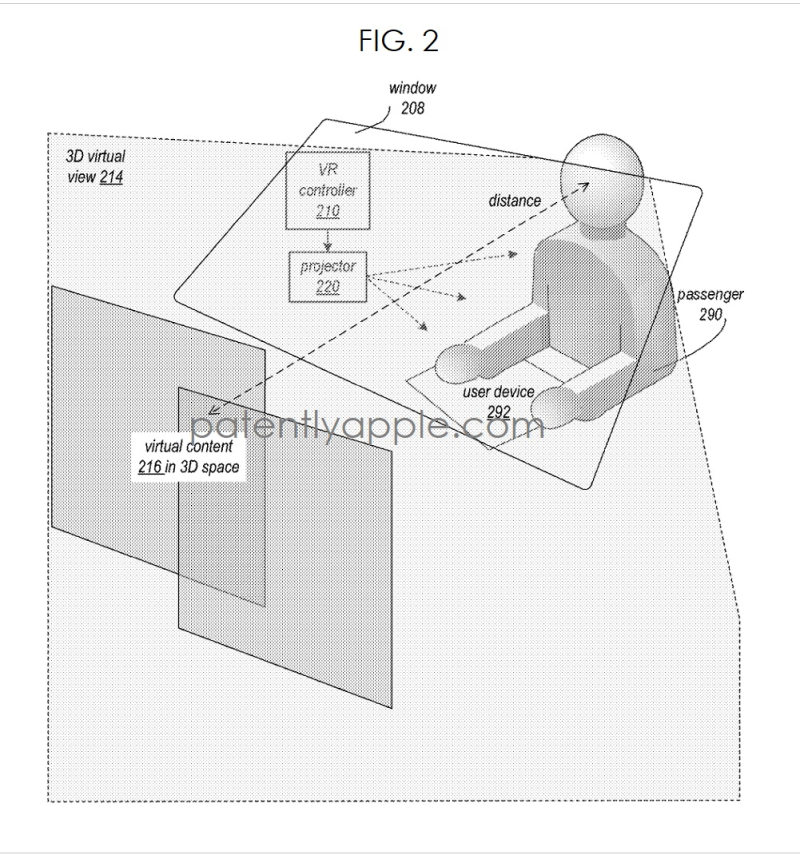 Apple's patent FIG. 18 below illustrates a VR system monitoring a passenger using a VR system in a vehicle. 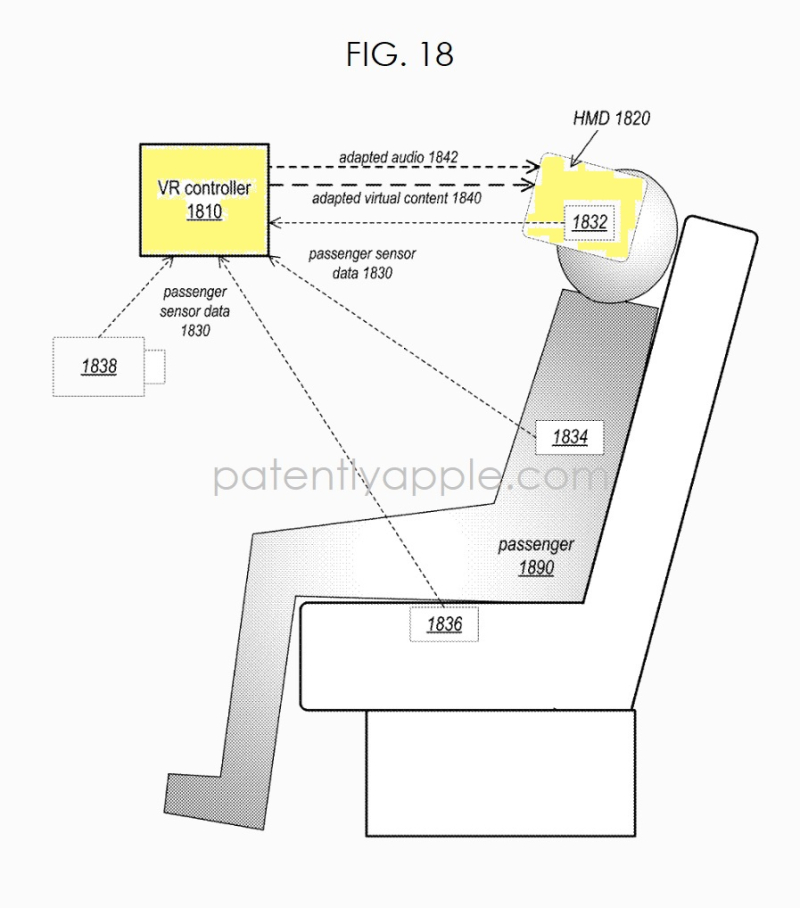 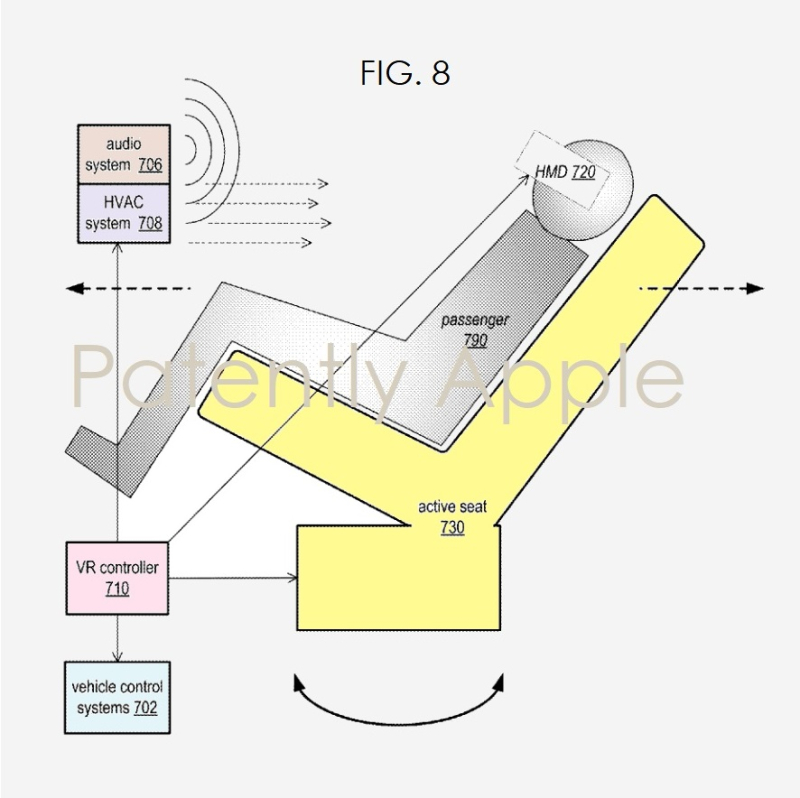 In Apple's patent FIG. 9A below, we see that a busy executive travelling in their autonomous vehicle won't have to waste time and be able to attend virtual meetings. In FIG. 9B we see that the one calling the virtual meeting can hold it beyond the office conference room, such as the back of a moving flatbed truck or other place like on a boat sailing down a river, as seen in FIG. 10A. The virtual experiences could include feeling the wind on your face if travelling fast on a boat or feel the fire if by a fireplace. 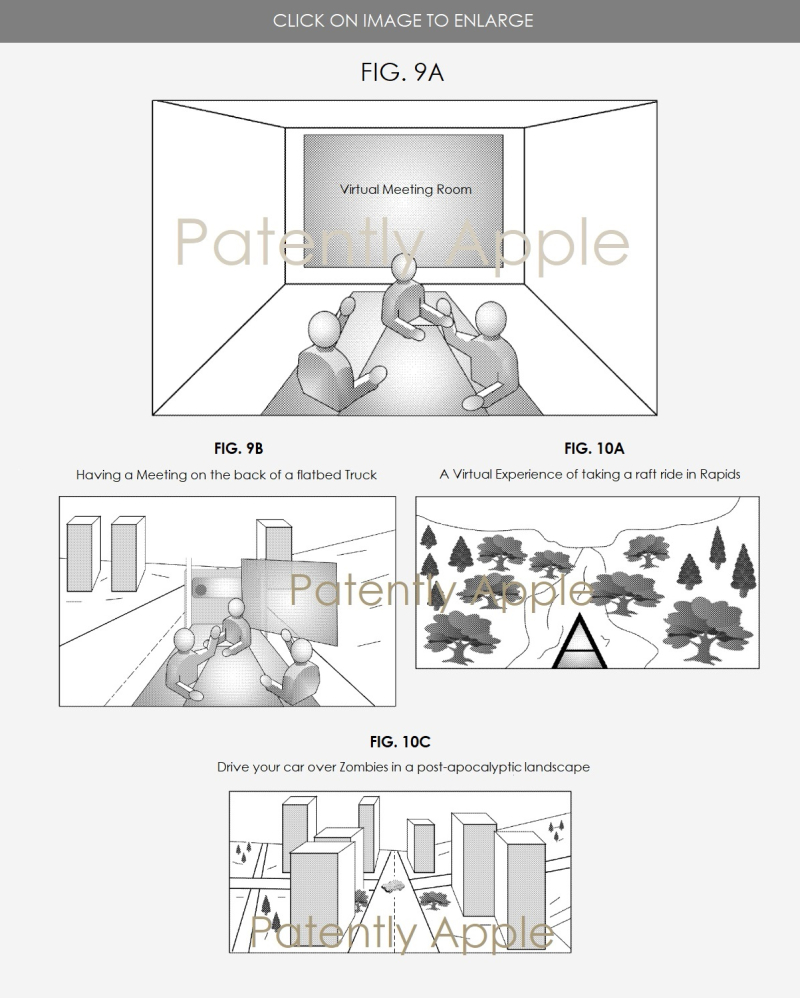 In patent FIG. 10C above, Apple depicts the VR Headset user in the vehicle could decide to play games with one of them being the use of their car running over AR/VR zombies. That one's a little off-the-wall, but it's in the patent folks. 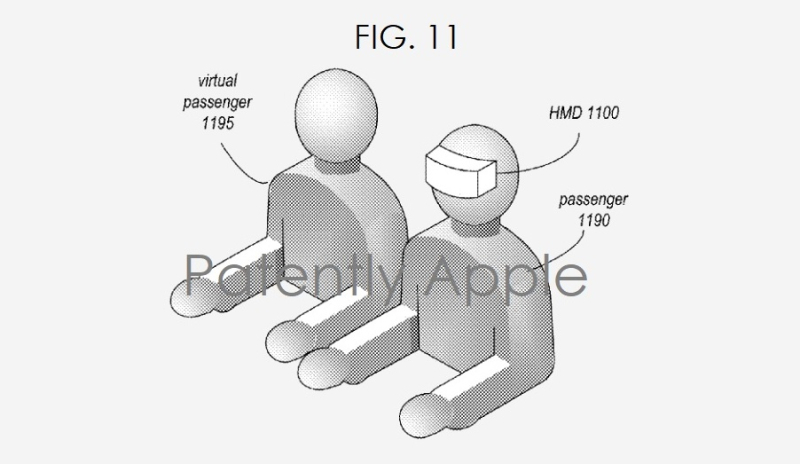 For more details of this long-term project of Apple's, review Apple's granted patent 11,321,923. Apple filed for this patent back in 2017.