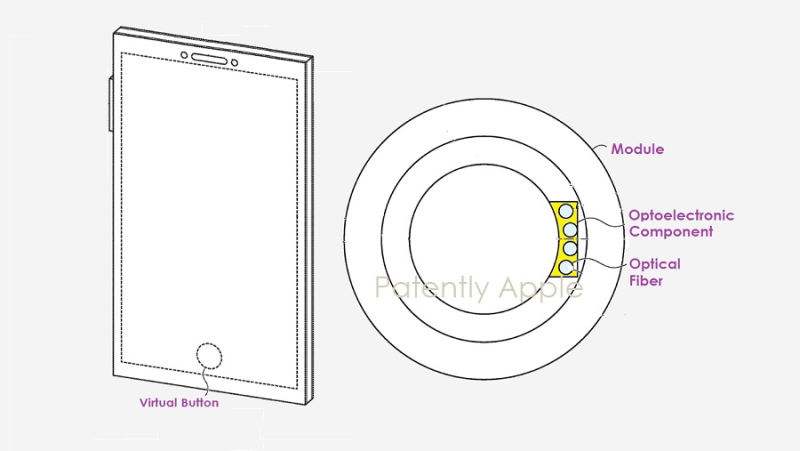 Today the U.S. Patent and Trademark Office officially granted Apple a patent that relates to the use of optical fibers behind displays that could capture biometric data – fingerprint data - at much higher rates and accuracy.

It's been rumored for years that under display fingerprint technology would be coming to iPhone and each year analysts like Ming-Chi Kuo continue to stretch out their predictions.

With component shortages hurting Apple as is, it's definitely not the time for Apple to introduce a sophisticated feature that could have component issues holding back iPhone shipments.

With that said, Apple's granted patent states that it may be desirable to capture a two-dimensional (2D) or three-dimensional (3D) image of an object or user that is proximate to a device. In some cases, the 2D or 3D image may be an image of a fingerprint, a face, or a scene in a field of view (FoV).

More specifically, Apple notes that electronic devices often include optoelectronic components for providing illumination, sensing the proximity of an object, capturing an image, and so on. In contrast to many solutions that position optoelectronic components under a display and emit or receive electromagnetic radiation through the display (which can result in optical transmission losses of 95-99%), the techniques described in Apple's patent application use optical fibers or optical fiber bundles to route electromagnetic radiation between an optoelectronic component positioned under, partially under, or adjacent a display, to along an edge of the display (e.g., to a gap between the display and a bezel), to an area of an optically-transmissive component or surface.

The area of the optically-transmissive component or surface may be adjacent the display or near a perimeter of the display. Electromagnetic radiation may be sensed/detected in a similar manner.

Apple's patent FIG. 1A below is the front side of an iPhone. In some cases, the front-facing camera #112 and/or other sensors of the iPhone may be positioned under, partially under, or adjacent the display #104, and electromagnetic radiation emitted and/or received by the sensor(s) may be routed through a gap (or gaps) adjacent the display.

An under-display or adjacent optical emitter, detector, or transceiver may also be configured as (or provide) a proximity sensor; a 2D or 3D camera (sometimes in combination with a flood illuminator or structured light source); a bio-authentication sensor (e.g., a facial recognition sensor or fingerprint sensor); an eye/gaze tracker, device tracker, or other optical tracking system; an optical communication system; and so on.

The iPhone may also include various input devices, including a virtual button #118 or other sensors integrated with a display stack positioned under the display. 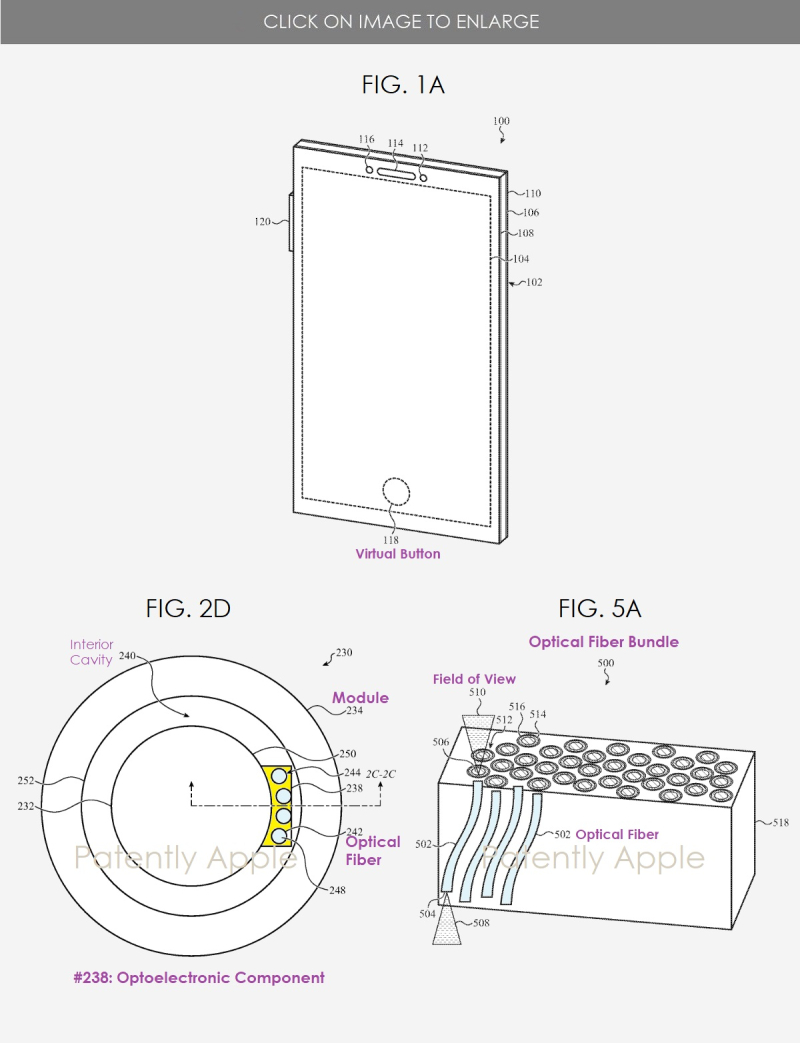 Apple's patent FIG. 5A above illustrates a first example configuration of an optical fiber bundle #500.