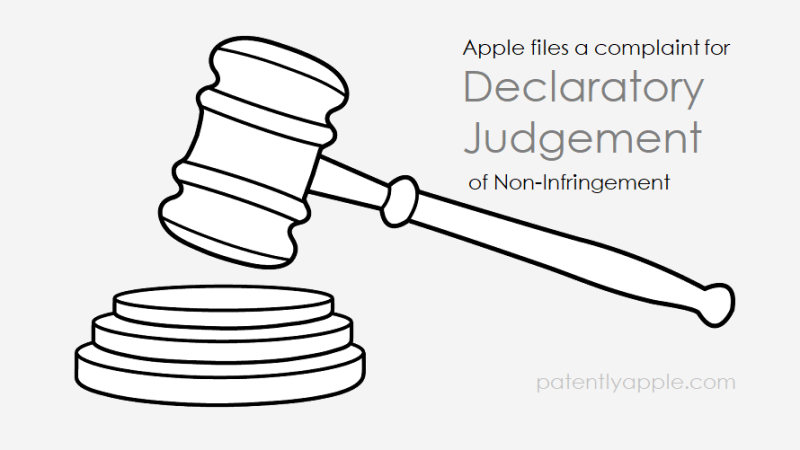 Last week Apple filed a complaint for Declaratory Judgement against Chian Chiu Li, an individual residing in Fremont California who is set to file a patent infringement case against Apple using patent 11,016,564 titled "System and method for providing information." The patent relates to eye-tracking technologies. Apple filed a complaint for 'Declaratory Judgement of Non-Infringement of U.S. Patent 11,016,564 in the Northern District of California in an effort to stop the patent infringement case from proceeding.

On information and belief, Defendant is the sole owner of U.S. Patent No. 11,016,564 (“the ‘564 patent” or “Asserted Patent”). Defendant’s prior actions and statements have created a substantial controversy of sufficient immediacy and reality to warrant the issuance of a declaratory judgment of non-infringement as to whether Apple products infringe the Asserted Patent.

In the Original Complaint, Defendant alleged that Apple products, such as several versions of iPhone and iPad Pro, infringe the ‘564 patent.

Indeed, as mentioned above, the parties’ history extends back beyond Defendant’s actual lawsuit. Defendant and Apple’s respective representatives exchanged correspondence over the course of several months prior to Defendant filing the Original Complaint. Apple maintained throughout the course of the parties’ communications that it did not infringe the ‘564 patent and explained why a license was unnecessary.

Without prior notice to Apple, on May 17, 2022, Defendant voluntarily dismissed the Original Complaint without prejudice to refiling. Defendant provided no explanation or justification for his decision to voluntarily dismiss the Original Complaint without prejudice to refile here or in another district, and provided Apple no assurances that Apple was safe from a future suit involving the Asserted Patent and substantially identical infringement allegations.

Apple has a reasonable apprehension that Defendant will refile suit and assert that the Accused Devices infringe the ‘564 patent. Both the pre-suit communications between Apple and Defendant and Defendant’s dismissal of the Original Complaint without prior notice and without prejudice, demonstrates that it is highly likely that Defendant will again assert infringement of the ‘564 patent against Apple. In the meantime, the cloud of Defendant’s allegations and litigation hangs over Apple." [Emphasis here set by Patently Apple]

Apple is asking the court to declare that judgement be entered in favor of Apple against Defendant; Declare that Apple has not and does not infringe, either directly, contributorily, by inducement, or willfully, any claim of the ‘564 patent by making, using, selling, offering to sell, and/or importing the Accused Devices; Finding this to be an exceptional case under 35 U.S.C. § 285, and awarding Apple its reasonable attorney’s fees, and more.