Home Archives Contact Us Subscribe Twitter MeWe Facebook Patently Mobile
While China's Smartphone market could drop 20% in Q2 due to a Spike in new COVID cases, Apple may actually see growth
Starting today, HBO Max is slowly Rolling out an Update for their Apple TV App that Promises better stability and a few New Features 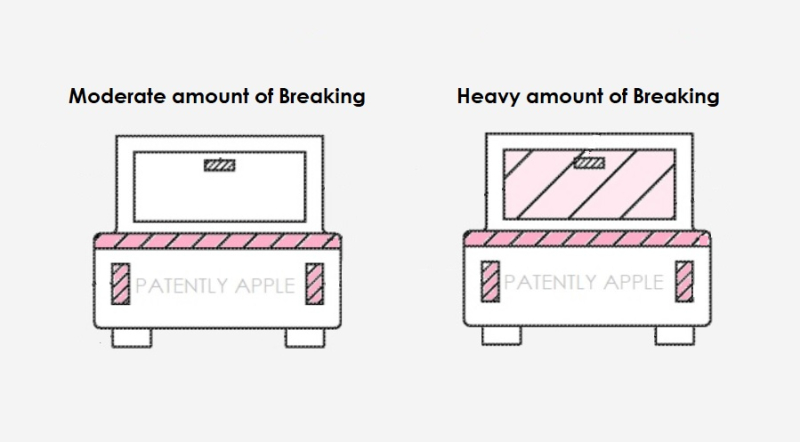 In 2021 Patently Apple posted two Project Titan patents (01 and 02) that related to exterior lighting and warning system for future Apple autonomous vehicles. Today the US Patent & Trademark Office published a patent application from Apple that expands on this same subject matter that now includes adding icons and messaging to following cars.

In some configurations, the light-emitting devices of a vehicle may supply text, icons, stationary or moving patterns of light, colored light, light that varies in intensity, and/or other light-based output that can inform a nearby pedestrian, driver, or autonomously operated computing equipment such as an autonomously operated vehicle, traffic management system, roadside camera system, or other systems of the intentions of the driver of the vehicle.

Apple's patent FIGS. 7A, 7B, 7C, and 7D below are rear window views of an illustrative vehicle window that has an integrated light-emitting device that displays information for following vehicles. 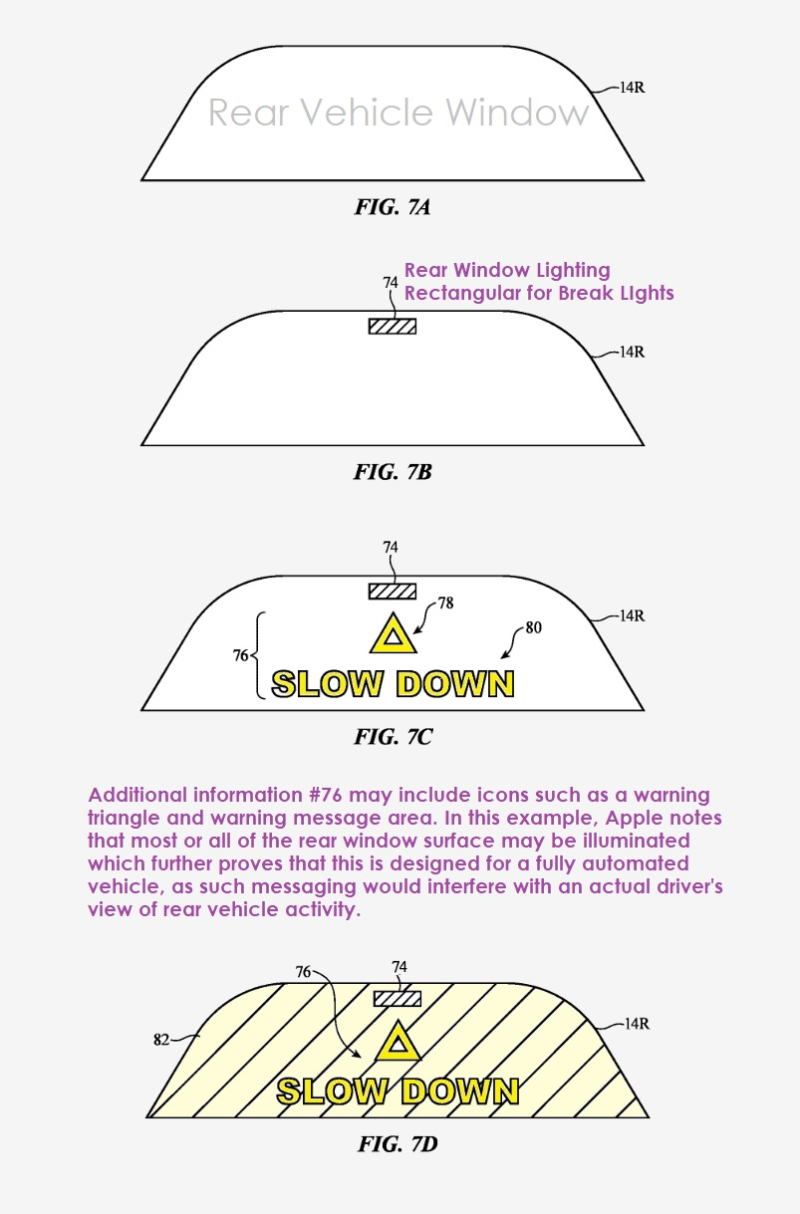 Apple adds that light-based devices may be used to produce braking indicators that vary as a function of braking intensity, vehicle speed, driving conditions, sensor inputs, traffic, wirelessly received data, or other factors. Consider, as an example, the displayed output on rear window 14R of FIGS. 7A, 7B, 7C, and 7D above. As shown in FIG. 7A, when no light output is being produced by the light-based device.  As shown in FIG. 7B, when the driver of the vehicle lightly brakes the vehicle, an area such as rectangular area #74 may be illuminated by the light device. Area #74 may be positioned in a region of rear window 14R that allows the area to serve as a center high mounted stop light. When the driver of the vehicle brakes moderately, an additional brake alert such as alert information #76 may be displayed below illuminated area #74, as shown in FIG. 7C.

Additional information #76 may include warning icons such a warning triangle #78 and warning messages such as warning message #80 (e.g., text). In response to hard braking by the driver of the vehicle, most or all of the rear surface of window #14R may be illuminated by the lighting device in addition to illuminating area #74 and displaying information #76, as shown by illustrative illuminated region #82 of FIG. 7D.

If desired, other information presented by the lighting device that may be displayed elsewhere in the vehicle such as side windows or the front windshield with information regarding weather conditions, traffic, vehicle speed, the behavior of pedestrians, sensor data, and more.

Considering that this is a patent application, the timing of such features for an autonomous vehicle is unknown at this time.