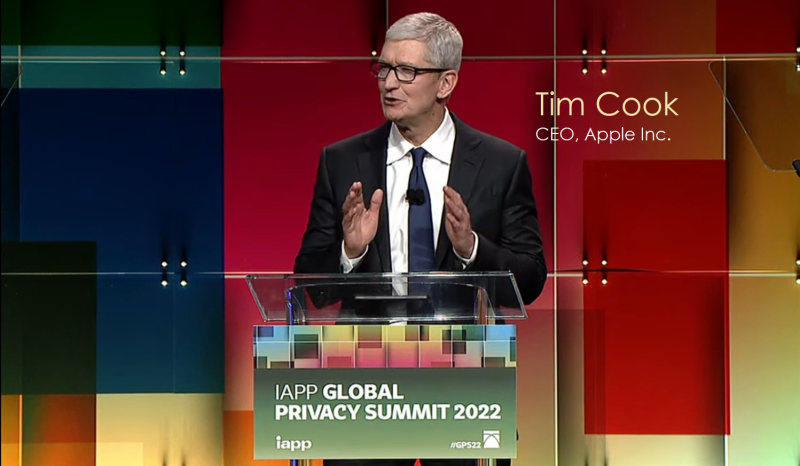 In early November 2021 Patently Apple posted a report titled 'Video: Apple's Craig Federighi, SVP of Software Engineering, warned of security risks to sideloading on Day 2 of Lisbon's Web Summit." Federighi carefully made Apple's case against sideloading step by step and explained how the company provides sophisticated on-device protection and a central app store with human review. You could check out the video of Federighi's presentation in our report here.

On April first Patently Apple posted a report on this subject matter titled "A Star-Studded list of U.S. Security Experts support Apple's fight to keep Sideloading out of the App Store for National Security reasons."

To top it off, Apple's CEO was one the keynote speakers at today's International Association of Privacy Professionals' Global Privacy Summit 2002 event. Tim Cook made his case against sideloading being a major concern and more so now that governments are blindly ruling in favor of sideloading for all the wrong reasons. The video below provides you with most of Tim Cook's speech. You could always watch the full video of the event that includes multiple speakers here.

Apple will fight this issue in the courts around the globe and won't go down without a fight that could take years to resolve. On March 25, Patently Apple posted a report titled "Apple urges the Appeals Court to Reverse a Court Order forcing them to accept alternative payment methods on the App Store." The key battle in that case is to establish that Apple isn't a "monopoly," contrary to how Governments perceive them. Should Apple get that decision reversed, it would provide them with legal ammunition in other legal cases, especially antitrust cases.