Home Archives Contact Us Subscribe Twitter MeWe Facebook Patently Mobile
Samsung Display has its eyes on a new project, making Quantum-Dot OLED Displays thin enough to be used in Future Scrollable Devices
HP is preparing to Tippy-Toe into the Hybrid Tablet-Notebook Market to Gauge Demand sometime in Q4 or CES 2023 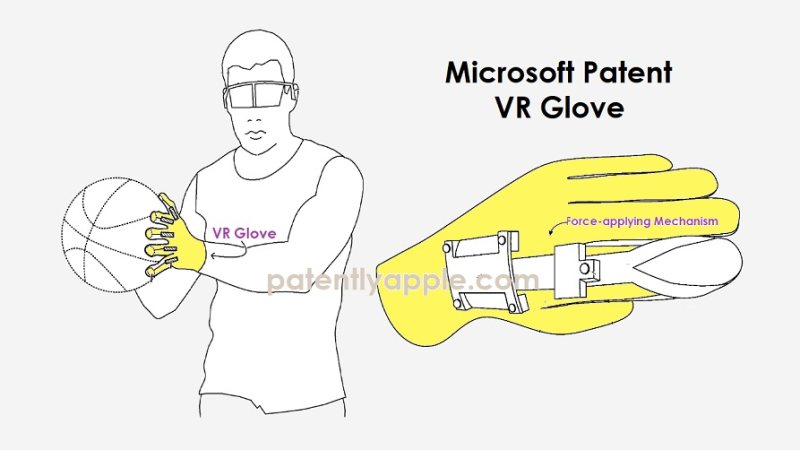 Although Apple's published patent filings for VR glove began to roll out in 2019, the bulk of them were published in 2021 (01, 02, 03, 04, 05 and 06). Some of filings revealed that Apple's work on VR Gloves dates back 2016 or six years ago. Apple kept their work on VR Gloves as secretive as possible, for as long as possible. This week a published VR Glove patent from Microsoft published in Europe shows that they too are now working on VR Gloves.

In 2020, Microsoft Research published a video on one of their possible future VR accessories called the PIVOT as presented in the video below.

For more on the possible future PIVOT accessory read the full UploadVR report.

Earlier this month Europe's WIPO published Microsoft's patent EP3977239. Microsoft's engineers state that tactile receptors of the human body, such as mechanoreceptors and nociceptors, detect mechanical stimuli and provide tactile sensations of pressure, vibration, skin stretch, etc. For example, a person may experience a pressure sensation on a finger pad, and also resistance to further motion, while the user touches or grasps a real object. However, such feedback is not sensed when interacting with virtual objects in a VR or VIR experience, which may make the experience seem less realistic.

In this way, a wearable device, such as a glove device, may be worn to provide such feedback. Some such devices include a clutch mechanism to selectively restrict motion of an articulable joint, such as a finger joint, so that the user senses resistance to motion at the apparent surface of a virtual object. While such a motion-restricting device may simulate a reactive force from a solid object that is felt on a joint, the device may not provide a realistic tactile sensation on the finger pads, palm, and/or other surface of a body that "contacts" the virtual object.

In order to provide the sensation of contact in VR and MR experiences, some wearable devices may include a haptic actuator configured to vibrate or press against the skin, in addition to an actuator to restrict joint motion. However, such devices may utilize separate actuation hardware for the motion restriction and tactile sensations, which may increase the cost, size, and complexity of a wearable device that includes both a clutch mechanism and a tactile simulator.

Accordingly, examples of haptic feedback devices that may address such issues are disclosed. Briefly, the disclosed examples utilize a motion restriction mechanism, such as a clutch mechanism, to both restrict motion and provide tactile feedback, thereby providing motion restriction and tactile feedback without using separate actuation hardware. This may help to provide a more compact form factor that is more comfortable. 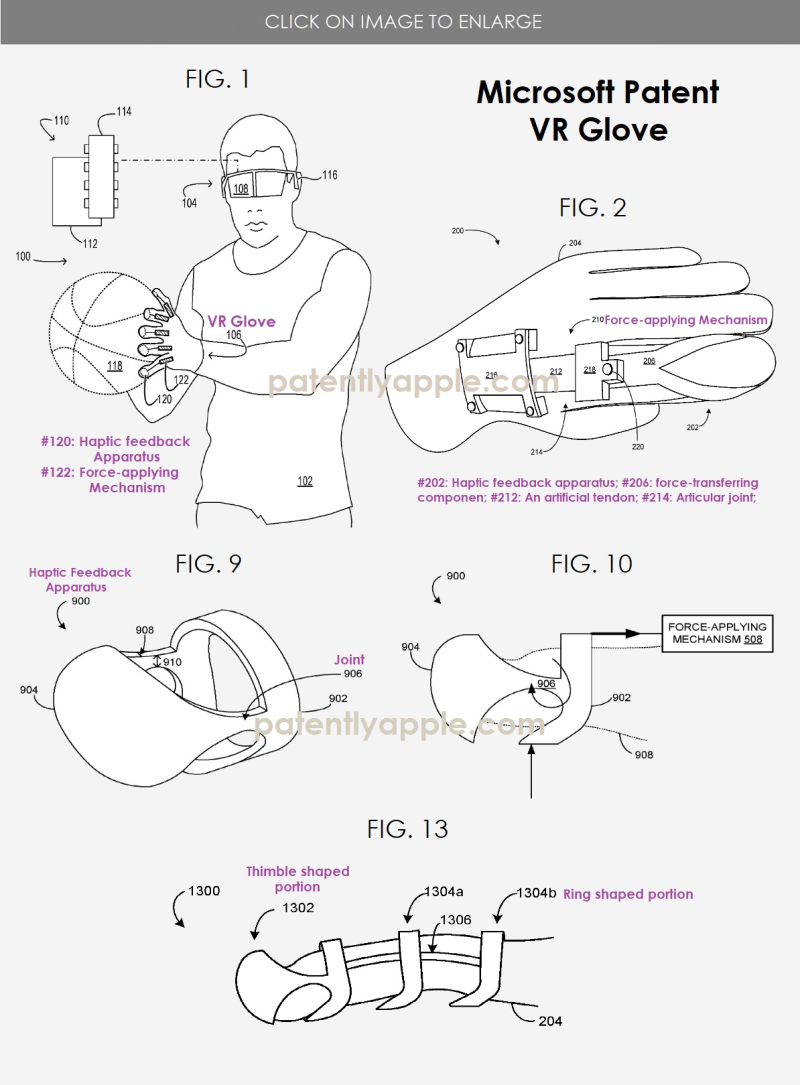 The Metaverse sounds promising, but it's definitely years away. While Meta offers game controllers for their headsets today, VR Gloves are likely to be the next big thing for VR headsets that will give users a next-generation tactile experience that will make exploring VR worlds much more realistic.

Here the race is on between Oculus/Meta, Microsoft, Apple and other players. Although Meta and Microsoft are well ahead of Apple with headsets, Apple's patents are detailing some truly advanced features that will allow the company to hit the market running in the next year or so as to take on today's established players.

For now, Microsoft is aiming their latest VR Glove patent at multiple markets to advance the markets that their HoloLens device is currently addressing. The patent specifically points to aiming their future VR gloves for gaming, industrial, commercial and healthcare scenarios. Microsoft's work on this accessory began in 2019.