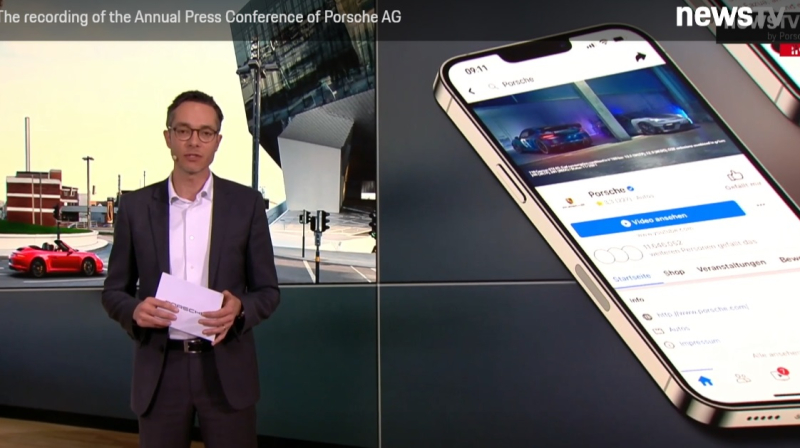 Today Porsche held its annual press conference that was made available live this morning. For sports car fans wanting to learn about some of the company's future ideas and plans, you check out their site here. The conference could be replayed. It resides at the top right hand side of the site (at present).  An IPO may be in Porsche's future and so talking up future plans and exciting new projects played a big part of today's event.

As you'll notice in our cover graphic above, images of Apple's iPhone 14 were prominently displayed behind Sebastian Rudolph, VP Communications, Sustainability and Politics at Porsche, at one point in the conference with no explanation as to why. Will future Porsche vehicles use Apple's Car Keys technology? I believe that was the first hint.

The big news this morning involved Porsche executives talking-up electric vehicles and new battery technology that will be coming to market in the not-too-distant future. They also spent some time talking up their investment in an electric bicycle company and plans to go full tilt into electric bicycle market over the next few years. The image below was taken from their conference today that shows the Porsche brand on the body of the bike sitting on a bike rack on a Porsche. 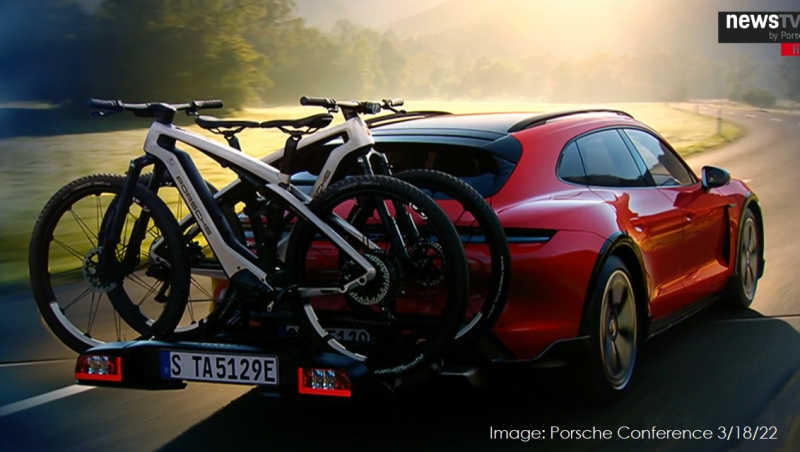 After the conference, authorized press members were able to ask the executives questions and the executives were able to add commentary. It was at this point that Automotive News Europe reported that Porsche's CEO Oliver Blume stated that "Managers at Porsche travelled to the United States late last year to discuss possible joint projects with iPhone maker Apple as well as with some other tech companies. We already have Apple CarPlay and we will expand on that."

Blume added that Porsche and Apple have traditionally cooperated closely and that they were "on the same wavelength" but added that it was too soon to make any decisions on future projects.

While the first thing that observers may think is that Porsche and Apple could be working on some form of vehicle related project considering that one of Apple's major hires in February 2021 was Dr. Manfred Harrer who worked at Porsche for almost 14 years. His LinkedIn profile in-part is presented below. 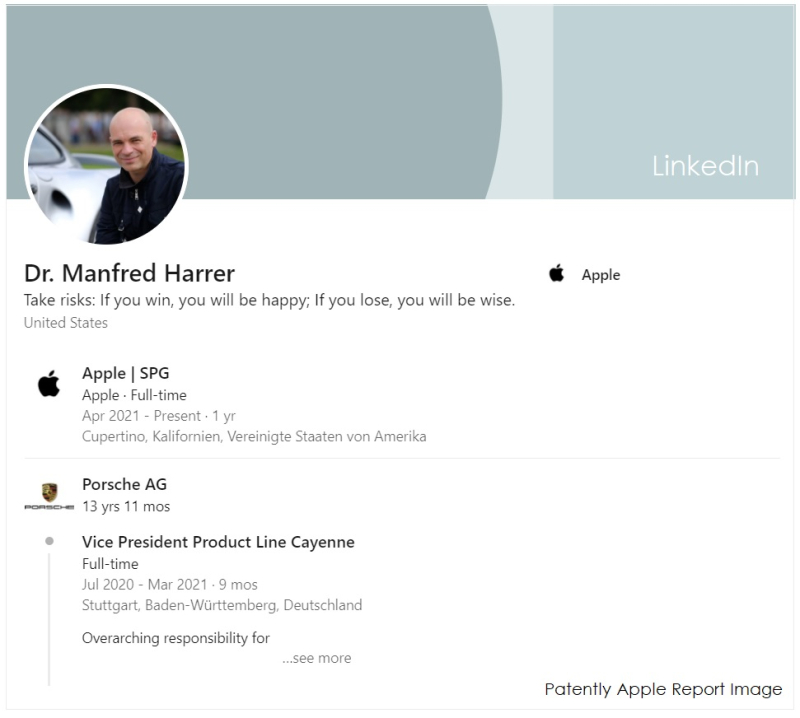 However, other projects could include a new GUI for CarPlay relating to Porsche's Electric Bicycles. Remember that Apple actually worked on a bike related patent for a GUI for iPod specifically for bikes back in 2010 (filed in 2009). So that could easily come in handy for an Electric Bike, to be for sure.

A longer range project could be an energy related project. Considering Apple's enormous renewable energy projects, Porsche may be looking for partners for their future "Charging Infrastructure" plans in California, the U.S. in general (and/or beyond). The image below was shown during one segment of their news conference today. 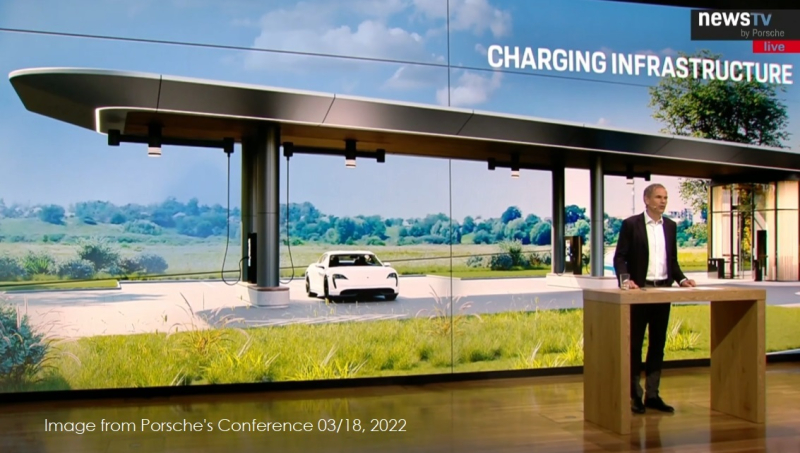 More specifically, Porsche's CEO revealed a project for building out 7,000 Charging Stations in Europe by 2025 with each station containing up to 12 recharging devices.

Lastly and coincidentally, the U.S. Patent Office published a patent application from Apple about a new power ecosystem for recharging vehicles and other "moving object" such as a bike. Apple's patent point #0041 actually points to a "bicycle rack" for a vehicle and/or vehicle trailer (patent point #0041).

Below is Apple's patent FIG. 2 illustrating a power ecosystem for Vehicles uses an accessory power pack that could be charged at an office, home or business. 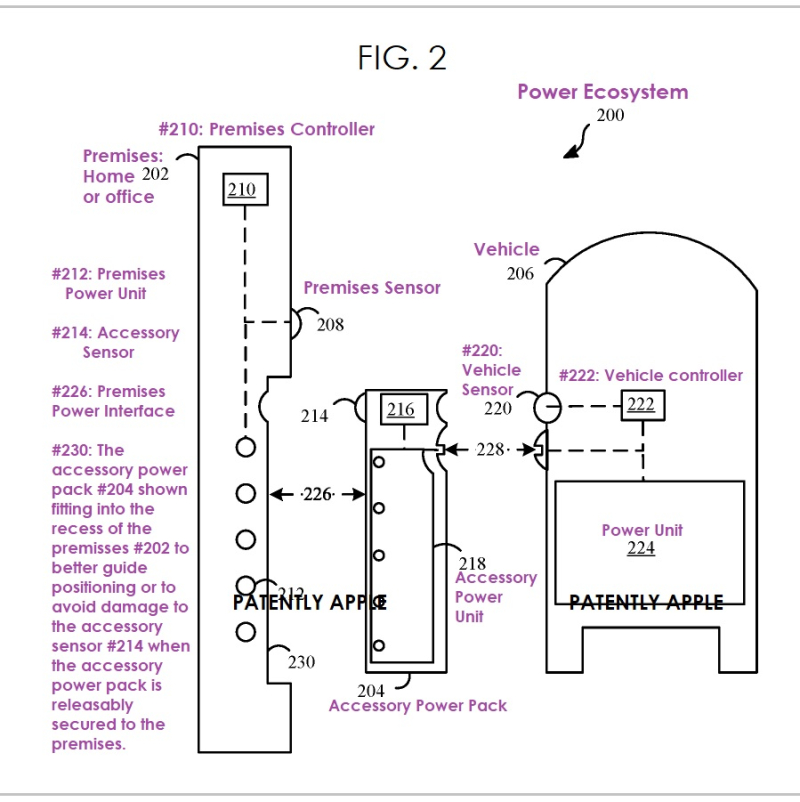 Possibly having Porsche's future charging station infrastructure build in a power accessory charging component could be an interesting development for both companies over time.

Steve MacManus: Senior Director. Came to Apple via Tesla (was an Engineering VP)

So while Apple's Car Key and possibly a CarPlay-like App for electric bikes could be realistic shorter-term joint projects between Porsche and Apple, there could also be a few larger projects where the two companies could collaborate on over time. Stay tuned.