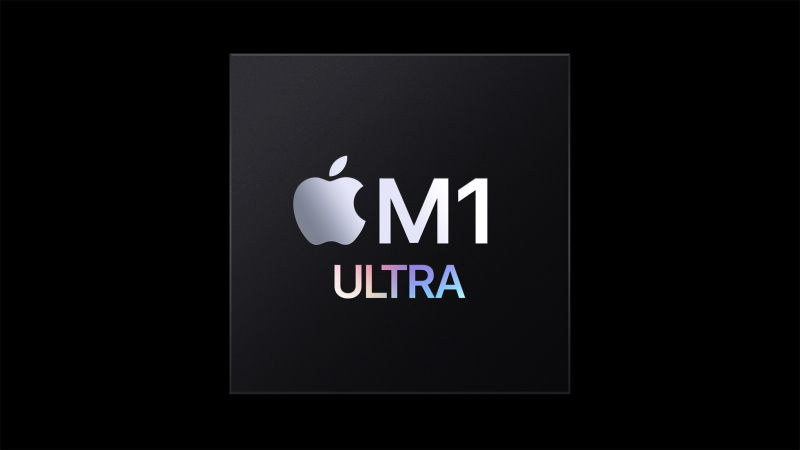 Today at Apple's first product event of the year, they introduced the new M1 Ultra, the next giant leap for Apple silicon and the Mac. Featuring UltraFusion — Apple’s innovative packaging architecture that interconnects the die of two M1 Max chips to create a system on a chip (SoC) with unprecedented levels of performance and capabilities — M1 Ultra delivers breathtaking computing power to the new Mac Studio while maintaining industry-leading performance per watt. The new SoC consists of 114 billion transistors, the most ever in a personal computer chip.

M1 Ultra can be configured with up to 128GB of high-bandwidth, low-latency unified memory that can be accessed by the 20-core CPU, 64-core GPU, and 32-core Neural Engine, providing astonishing performance for developers compiling code, artists working in huge 3D environments that were previously impossible to render, and video professionals who can transcode video to ProRes up to 5.6x faster than with a 28-core Mac Pro with Afterburner.

Another Leap Forward in the Transition to Apple Silicon

Apple has introduced Apple silicon to nearly every Mac in the current lineup, and each new chip — M1, M1 Pro, M1 Max, and now M1 Ultra — unleashes amazing capabilities for the Mac. M1 Ultra completes the M1 family of chips, powering the all-new Mac Studio, a high-performance desktop system with a reimagined compact design made possible by the industry-leading performance per watt of Apple silicon. 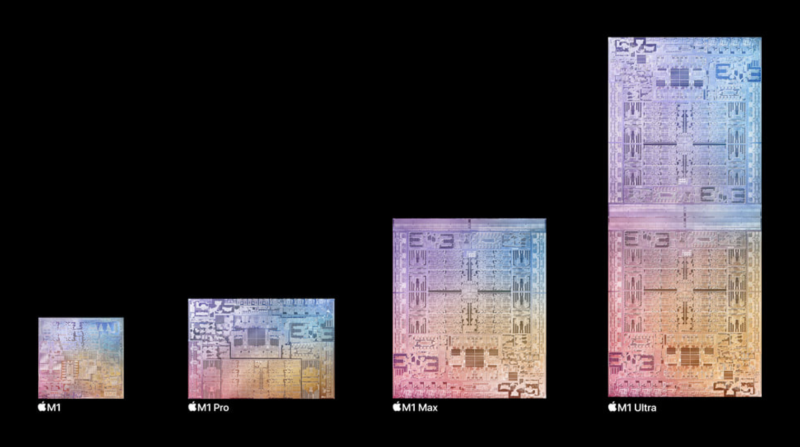 Apple Silicon and the Environment

The energy efficiency of Apple’s custom silicon helps Mac Studio use less power over its lifetime. In fact, while delivering extraordinary performance, Mac Studio consumes up to 1,000 kilowatt-hours less energy than that of a high-end PC desktop over the course of a year.

Today, Apple is carbon neutral for global corporate operations, and by 2030, plans to have net-zero climate impact across the entire business, which includes manufacturing supply chains and all product life cycles. This means that every chip Apple creates, from design to manufacturing, will be 100 percent carbon neutral.

The foundation for M1 Ultra is the extremely powerful and power-efficient M1 Max. To build M1 Ultra, the die of two M1 Max are connected using UltraFusion, Apple’s custom-built packaging architecture. The most common way to scale performance is to connect two chips through a motherboard, which typically brings significant trade-offs, including increased latency, reduced bandwidth, and increased power consumption. However, Apple’s innovative UltraFusion uses a silicon interposer that connects the chips across more than 10,000 signals, providing a massive 2.5TB/s of low latency, inter-processor bandwidth — more than 4x the bandwidth of the leading multi-chip interconnect technology. This enables M1 Ultra to behave and be recognized by software as one chip, so developers don’t need to rewrite code to take advantage of its performance. There’s never been anything like it. 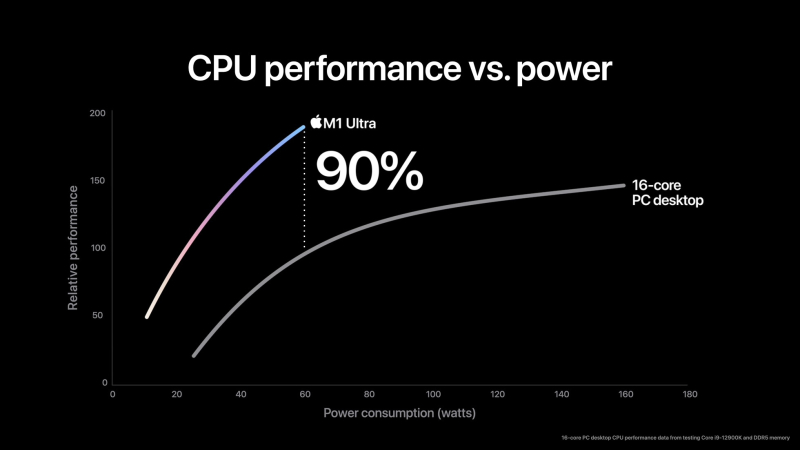 For the most graphics-intensive needs, like 3D rendering and complex image processing, M1 Ultra has a 64-core GPU — 8x the size of M1 — delivering faster performance than even the highest-end PC GPU available while using 200 fewer watts of power. 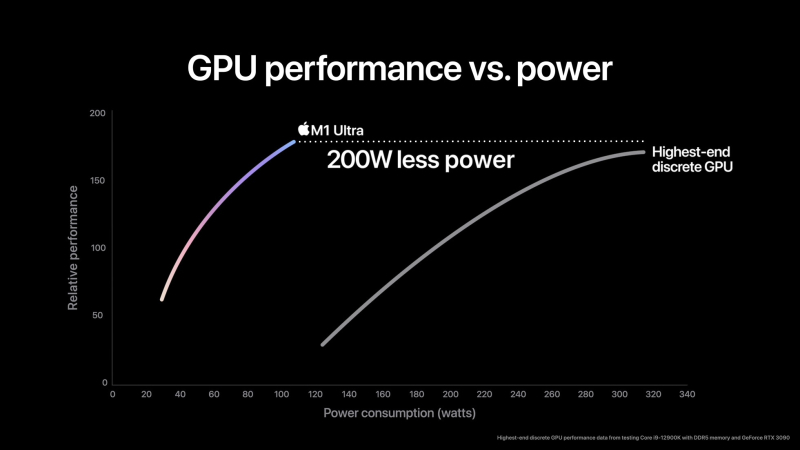 Apple’s unified memory architecture has also scaled up with M1 Ultra. Memory bandwidth is increased to 800GB/s, more than 10x the latest PC desktop chip, and M1 Ultra can be configured with 128GB of unified memory. Compared with the most powerful PC graphics cards that max out at 48GB, nothing comes close to M1 Ultra for graphics memory to support enormous GPU-intensive workloads like working with extreme 3D geometry and rendering massive scenes.

The 32-core Neural Engine in M1 Ultra runs up to 22 trillion operations per second, speeding through the most challenging machine learning tasks. And, with double the media engine capabilities of M1 Max, M1 Ultra offers unprecedented ProRes video encode and decode throughput. In fact, the new Mac Studio with M1 Ultra can play back up to 18 streams of 8K ProRes 422 video — a feat no other chip can accomplish.4 M1 Ultra also integrates custom Apple technologies, such as a display engine capable of driving multiple external displays, integrated Thunderbolt 4 controllers, and best-in-class security, including Apple’s latest Secure Enclave, hardware-verified secure boot, and runtime anti-exploitation technologies. 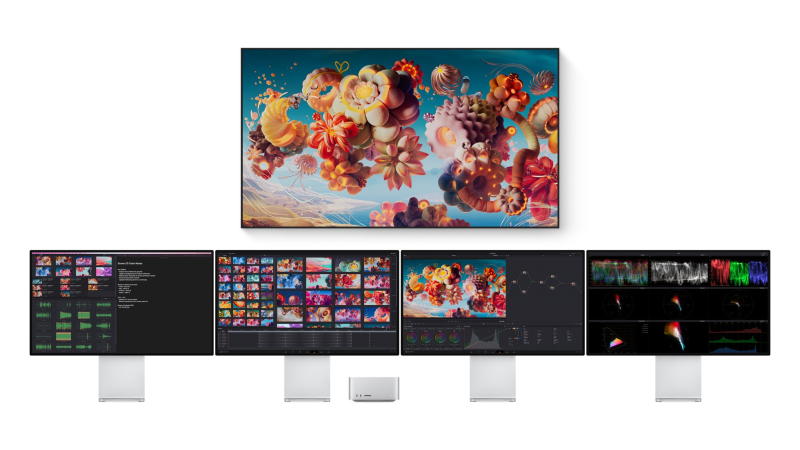 macOS and Apps Scale Up to M1 Ultra

Deep integration between hardware and software has always been at the heart of the Mac experience. macOS Monterey has been designed for Apple silicon, taking advantage of M1 Ultra’s huge increases in CPU, GPU, and memory bandwidth. Developer technologies like Metal let apps take full advantage of the new chip, and optimizations in Core ML utilize the new 32-core Neural Engine, so machine learning models run faster than ever.

Users have access to the largest collection of apps ever for Mac, including iPhone and iPad apps that can now run on Mac, and Universal apps that unlock the full power of the M1 family of chips. Apps that have not yet been updated to Universal will run seamlessly with Apple’s Rosetta 2 technology.