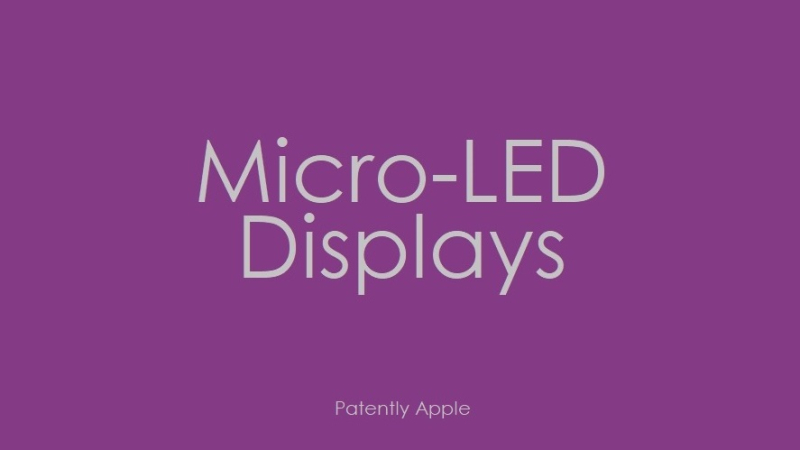 Apple focuses on delivering the very best displays possible for their devices including the iPhone, iPad, Apple Watch and Macs and micro-LED will be a next-gen display type that Apple is currently working on for future devices. In this patent Apple lists some of the applications and goals for micro-LED which include integrating ambient light sensors in a micro-LED display; integrating optical gesture and hover sensing; potentially offering water tolerant touch; fingerprint sensing; health sensing from vein imaging and other biometrics and more.

Today the US Patent & Trademark Office published a patent application from Apple that generally relates to sensor technology, and more particularly to embedded optical sensors in a micro-light-emitting diode (micro-LED) display. Some of the future applications for micro-LED displays include ambient light sensing, touch sensing, hover sensing, proximity sensing, fingerprint sensing, health sensing, and imaging. The achievable goals for each application are described in the corresponding row of that application.

In Apple's patent background they note that micro-light-emitting diode (micro-LED) is a technology used in displays consisting of an array of microscopic LEDs of different colors, such as red, green and blue. Competing with organic-LED (OLED) and quantum-dot LED (QLED) display technology, micro-LED is considered by some to be the superior technology, which have used in a super large (e.g., 146-inch) micro-LED television (TV) prototype. Similar to OLED, micro-LED is an emissive display technology where the picture elements, also known as pixels, are also the light source. This means emissive display technologies don't require a separate backlight layer, which allows displays to be thinner than liquid-crystal display (LCD). Unlike OLED, micro-LED doesn't require an encapsulation layer making it even thinner. QLED is not an emissive display type as LEDs are only used to light quantum dots. Both OLED and micro-LED have fast response times.

Unlike OLEDs, micro-LEDs are not made with organic compounds, but with the more traditional indium gallium nitride (InGaN)-based LEDs that have been shrunk down. The use of InGaN LEDs results in micro-LED displays having greater brightness without degradation and burn-in, which is possible on OLED and an upside of QLED displays.

While LED-backlit displays, commonly referred to as LED displays, can do regional dimming of LEDs for better contrast, they don't have the inherent high contrast or response time of the true emissive display technologies such as OLED and micro-LED.

The optical-sensor-embedded micro-LED display of the subject technology can be used in a number of applications, such as ambient light sensing (ALS), fingerprint sensing, and proximity sensing.

The spectral response wavelengths of the embedded optical sensors of the subject technology depends on the material used and can cover visible, near infra-red (IR) and short-wave IR (SWIR), especially when QD is used. The embedded optical sensors can be read out using different read-out circuits such as 3T-pixel, direct injection pixel or current trans-impedance amplifier (CTIA) read-out circuits.

Embedded light collimators can be achieved by adding additional black matrix (BM) layers or using one or more QD focusing layers across the display, as discussed in more detail in Apple's patent filing.

Apple's patent FIGS. 5A and 5B below are a table and a chart, respectively, illustrating examples of applications of optical-sensor-embedded micro-LED displays, in accordance with one or more aspects of the subject technology. 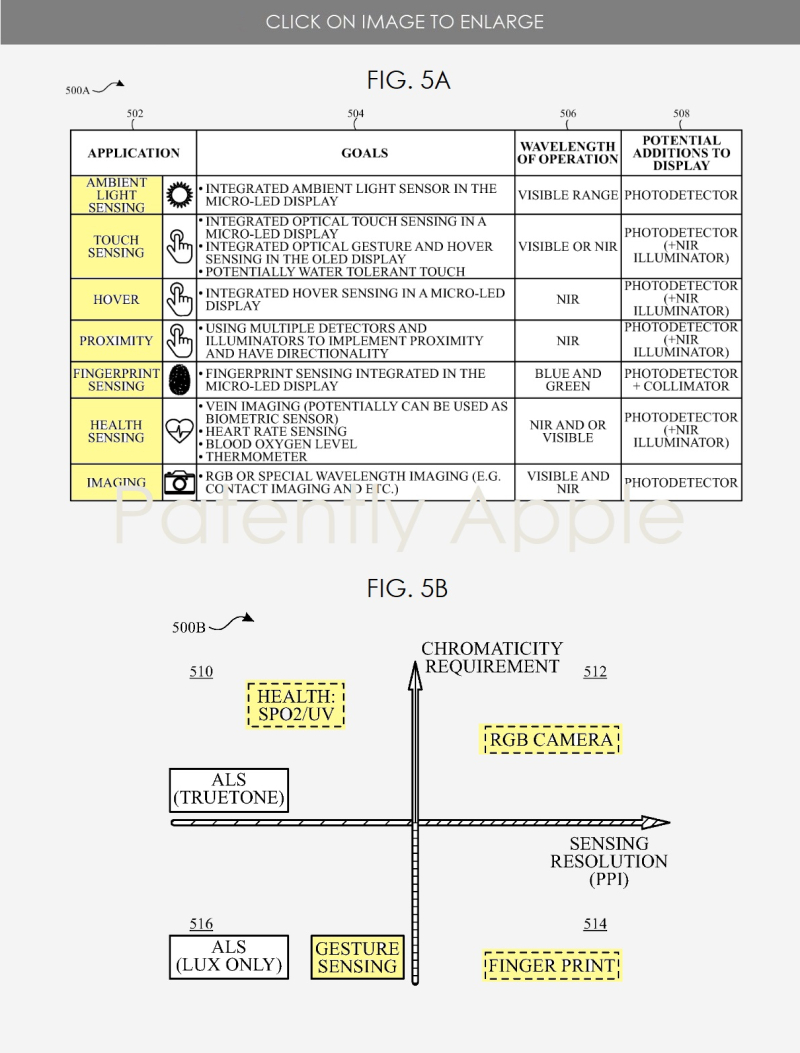 The chart 500B of FIG. 5B above illustrates different applications of the optical-sensor-embedded micro-LED display of the subject technology in four regions of a two-dimensional space. The two dimensions are the chromaticity requirement for each application and the required sensing resolution for that application. The chart 500B is self-explanatory.

Engineers and tech enthusiasts who love to drill down into the finer details could review Apple's patent application 20220068900 here.

Other micro-LED patents on record include one relating to a possible future fitness band and a new micro-LED chiplet architecture.