The Process behind Apple's 'Noise' App, Acoustic Dosimetry, will be added to future AirPods and HomePod mini 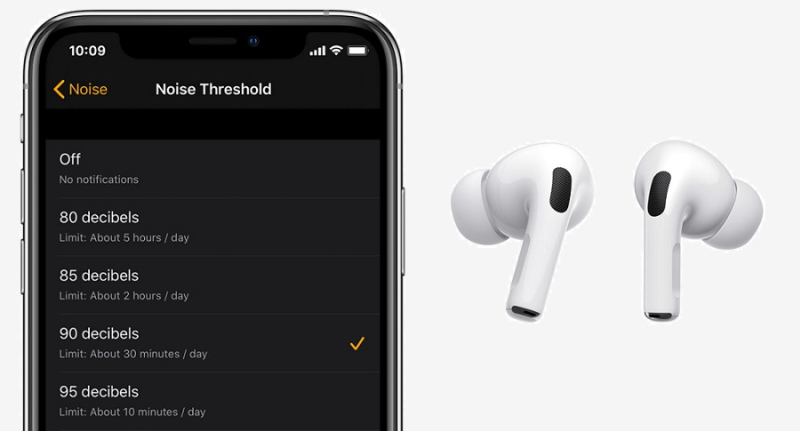 In 2019 Apple introduced watchOS 6 with advanced health capabilities including a 'Noise' app. At the time, Apple stated that "the Noise app helps users understand the sound levels in environments such as concerts and sporting events that could negatively impact hearing. As the sound levels change, the app’s decibel meter moves in real time. The watch can send a notification if the decibel level reaches 90 decibels, which can begin to impact hearing after four hours per week of exposure at this level, according to the World Health Organization."

Today the US Patent & Trademark Office published a patent application from Apple that relates to this very subject matter.

Apple notes that acoustic dosimetry may be a process of the measuring audio exposure over a period of time (e.g., an hour, a day, a week, a month, etc.) in order to provide a cumulative audio-exposure reading (e.g., a sound pressure level (SPL) value). It appears that this is separate from noise cancellation found in AirPods today.

According to Apple, a listener may be exposed to user-desired audio content (e.g., music) through an audio output device, such as a headset that is worn by a listener. Acoustic dosimetry may also relate to measuring a listener's exposure to environmental noise. To measure environmental noises, an electronic device (e.g., a SPL meter) captures the noises (e.g., using a microphone) that are within a close proximity to a listener, and outputs a SPL reading (e.g., displaying the reading on a display screen of the SPL meter).

Extended periods of exposure to loud sounds have been shown to cause hearing loss (e.g., noise-induced hearing loss (NIHL)). NIHL is attributed to damage to microscopic hair cells inside the inner ear due to loud sound exposure. For instance, extended exposure to sounds at or above 85 dB may cause temporary or permanent hearing loss in one or both ears. Therefore, some organizations (e.g., the National Institute for Occupational Safety and health (NIOSH) has recommended that worker exposure to ambient noise be controlled below a level equivalent to 85 dBA for eight hours to minimize occupational NIHL.

Electronic headsets have become increasingly popular with users, because they reproduce media such as music, podcasts, and movie sound tracks with high fidelity while at the same time not disturbing others who are nearby. Recently, the World Health Organization (WHO) has released hearing health safety standards that limit the maximum sound output of a headset to 85 dBA.

In order to satisfy this standard, an acoustic dosimetry process (e.g., that is executed within the headset or another electronic device that is paired with the headset) may monitor an in-ear SPL at the headset, and notify (or alert) a user when the sound exceeds that threshold.

Specifically, the acoustic dosimetry process measures or estimates in-ear SPL, e.g., at or near an eardrum reference point, during sound playback. In one aspect, the in-ear SPL is measured as follows. The signal from an internal microphone of the headset, which picks up all sounds in the ear canal, may be processed into an equivalent SPL, using for example laboratory calibration results that include correction factors, e.g., equalization, to be applied to the microphone signal. These correction factors may account for an occlusion effect in which the headsets at least partially occlude the user's ear canal.

The in-ear SPL may be determined during playback through the headset worn by the user. Once estimated, the in-ear SPL is converted into a sound sample having units defined by the hearing health safety standards.

These sound samples may then be used by the dosimetry process to track headset audio exposures. This conversion of the in-ear SPL into sound samples may be unnecessary, however, when the sound is being played back into the ambient environment, e.g., by a loudspeaker. Therefore, it may be necessary to determine the type of audio output device through which a listener is listening to sound in order to properly configure a dosimetry process (e.g., to convert in-ear SPL values when the output device is a headset).

To overcome these deficiencies, Apple's patent application describes an audio system that is capable of configuring a dosimetry process based upon a determination of whether the listener is listening to sound through a headset or a loudspeaker.

The audio system determines whether the audio output device is a headset or a loudspeaker based on the microphone signal. 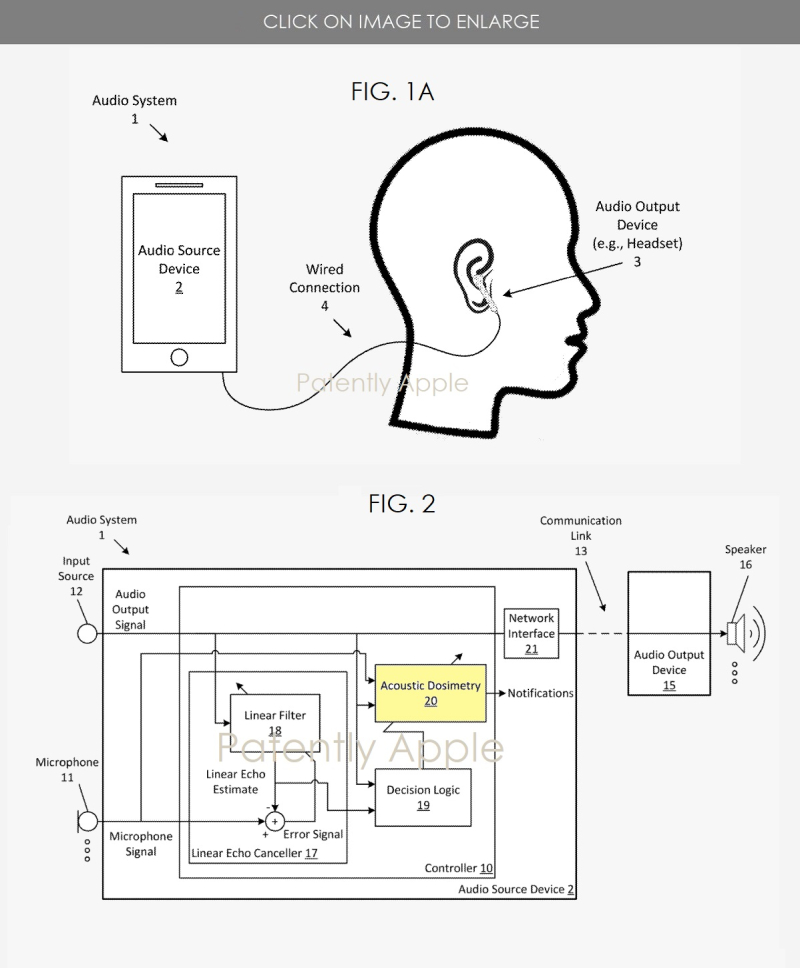