On November 11, the US Patent & Trademark Office published a patent application from Google that relates to a possible future 'Air Mouse,' a computer accessory that incorporates non-line-of-sight (NLOS) 6-DoF (Degrees of Freedom) electromagnetic (EM) tracking technology.

The implementations described in the patent filing further describes their Air Mouse incorporates a non-line-of-sight (NLOS) sensing technology, 6-DoF electromagnetic tracking (EM) technology, and 3-DoF tracking technology to track both position and orientation (e.g., pose) of at least one element embedded in the air mouse device.

Employing the EM tracking technology in the air mouse allows for a 6-DoF device that is robust against occlusions caused by palms, fingers, or other body parts blocking sensors of the air mouse device.

The systems and techniques solve a technical problem of accurately tracking an input device (e.g., an air mouse device) to accurately convey, to a user of the input device, manipulations of 3D content in 3D space within a user interface of a computing device.

The technical solutions described herein may provide a technical effect of ensuring a one to one motion correlation in six degrees of freedom between movements carried out by the input device and any resulting movement of an object in virtual 3D space on the computing device. The systems and techniques described herein may provide improved input device movement stability, improved tracking accuracy for the input device, and efficient tracking in 6-DoF space.

In Google's patent FIG. 5C below, a user may be using the air mouse device #502 to access software and 3D content #534 in the user interface (#503) in a Chromebook. The air mouse may be moved from left to right and forward in space to cause a proportional change in the position of a 2D or 3D mouse cursor configured to move in the virtual space displayed on a computing device. Follow the movement positions of the air mouse (1), (2) and (3) below and corresponding movements on the Chromebook display to see the unique capability this brings to working with 3D imagery. 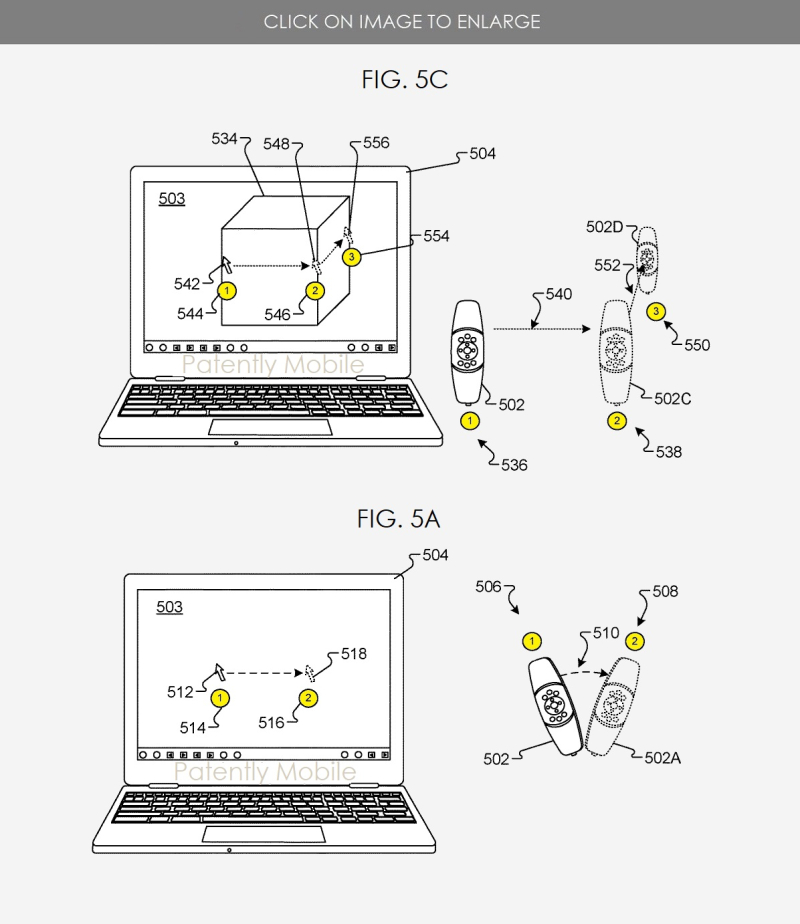 In Google's patent FIG. 5A above, the air mouse may be moved at an angle to cause a proportional change in the position of a 2D mouse cursor. For example, a user may perform an arc movement with their air mouse from position [1] #506 to position [2] #508, as shown by air mouse #502A at arrow #510. In response, the system may use pose information obtained from the electromagnetic tracking (EM) based tracking system to accurately move a Chromebook mouse pointer #512 a proportional distance from a left position [1] #514 to a right position [2] #516 in the user interface #503, resulting in the mouse pointer being shown by mouse pointer #518.

In Google's patent FIGS. 6A and 6B we see an alternative design for an Air Mouse in the form of a removable trackball. The ball sits above the trackpad but could be removed to provide the user with an added dimension. The user may move trackball #608 (FIG. 6B) left, right, up, down, forward, and backward including tilting, rotating, revolving movements to affect the movement of content, for example, in 3D space. The movement may be a one to one movement where a user moves the trackball in space and the content is moved the same distance in the computing device (or moved a predetermined proportional distance based on the physical movement of the trackball). 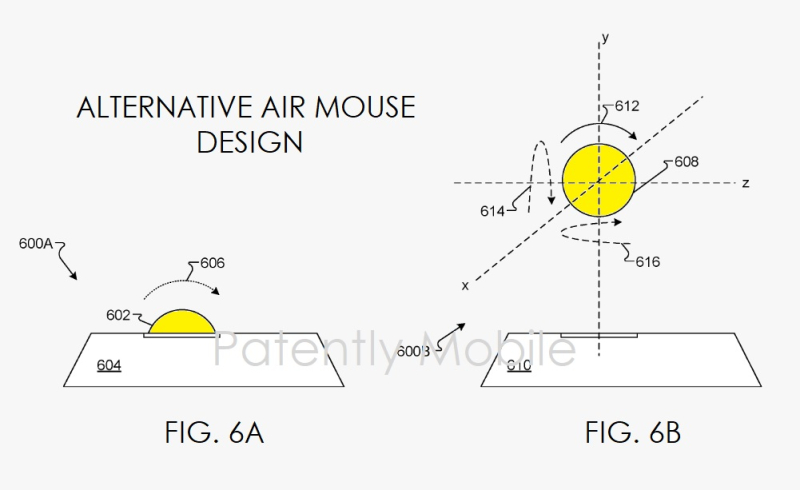 Further, a movement may tilt content at any angle that the user may choose when twisting and/or turning the trackball. Similarly, the user may manipulate content to twist the content backward (or forward) from a horizontal z, as indicated by arrow #614.

Patently Apple from time to time reports on unique inventions/patents that could become a trend from Apple competitors such as Google, Samsung, Microsoft or others under "Patently Mobile."