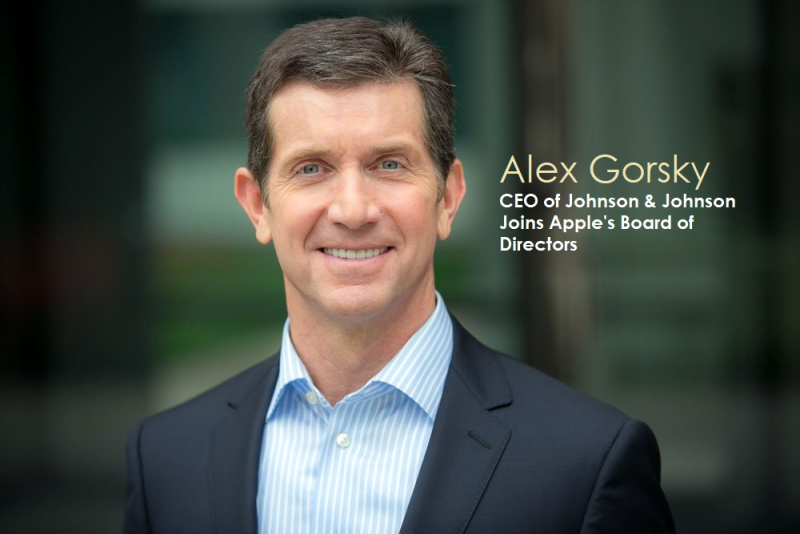 This afternoon Apple announced Alex Gorsky, chairman and CEO of Johnson & Johnson, has been elected to Apple’s board of directors. Gorsky will bring decades of experience in corporate leadership and health technologies, and a long track record of leading innovative and diverse teams around the world.

During Gorsky’s tenure as CEO and chairman, Johnson & Johnson has become the world’s largest healthcare company and one of the foremost innovators in research and development for emerging health technologies.

Tim Cook, Apple’s CEO: "Alex has long been a visionary in healthcare, applying his tremendous insight, experience, and passion for technology to the cause of improving lives and building healthier communities. We’re excited to welcome him to Apple’s board of directors, and I know that all of us will benefit from his leadership and expertise."

Arthur Levinson, Apple’s Chairman: "As a thoughtful and passionate leader, Alex has helped bring cutting-edge technologies to some of healthcare’s most urgent and complex challenges. His voice and vision will help Apple continue to make a positive impact on people’s lives through the power of technology."

Alex Gorsky: "I’ve long shared Apple’s belief that technology has the potential to improve lives and create healthier communities. It’s an honor to join Apple’s board of directors, and to be part of a values-led company that’s constantly innovating to both enable and enhance the way we live."

Gorsky began his tenure at Johnson & Johnson in 1988, accumulating a broad range of experience in sales, management, and marketing before becoming CEO in 2012. Gorsky has made innovation and technology key priorities, with groundbreaking investments that have helped shape the future of the pharmaceutical, medical device, and consumer health sectors.

An experienced leader in healthcare and business, Gorsky directs a global team of more than 130,000 at Johnson & Johnson. He is also a member of the Business Roundtable’s board of directors and the chairman of its Corporate Governance committee. Gorsky serves on the boards of IBM, Travis Manion Foundation, and The Wharton School of the University of Pennsylvania.

As a former captain in the US Army, Gorsky has been a vocal advocate for improving mental health services for veterans and their families. He has also been a trailblazer for diversity and inclusion — helping Johnson & Johnson become a nationally recognized leader, and expanding parental paid leave and mentorship programs for employees across the company.

Gorsky holds a Bachelor of Science from the US Military Academy at West Point, New York, and spent six years in the US Army, finishing his military career with the rank of captain. Gorsky also earned a Master of Business Administration from The Wharton School of the University of Pennsylvania in 1996.

According to Wikipedia, "Johnson & Johnson (J&J) is an American multinational corporation founded in 1886 that develops medical devices, pharmaceuticals, and consumer packaged goods." The expertise in "medical devices" and working with various governmental agencies to get approvals of such devices could be a real asset to Apple going forward.