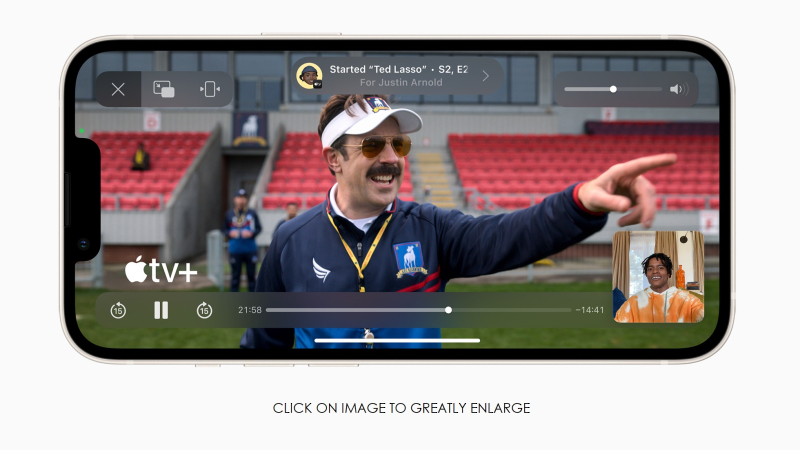 Apple has released a press release stating that "SharePlay, a powerful set of features for shared experiences while on a FaceTime call, has introduced new ways for Apple users to stay connected. With SharePlay support in Apple TV+, Apple Music, and Apple Fitness+ — as well as many of the most popular apps like NBA, TikTok, Twitch, Paramount+, and SHOWTIME — users can watch movies and TV shows, listen to music, or complete a workout with friends together on a FaceTime call.

SharePlay extends to Apple TV so users can watch on the big screen while using FaceTime on iPhone or iPad. With screen sharing support, users can also browse the web together, look at photos, or show their friends something in a favorite app. SharePlay is available with the release of iOS 15.1, iPadOS 15.1, and tvOS 15.1, and is coming to Mac later this fall.

Bob Borchers, Apple’s vice president of Worldwide Product Marketing: "SharePlay brings a whole new way to connect, share experiences, and have fun together on FaceTime. SharePlay leverages Apple’s integration of hardware and software to deliver a magical experience across iPhone, iPad, and Apple TV, and works with many Apple services as well as some of the most popular apps in the App Store."

SharePlay makes it possible for iPhone, iPad, and Mac1 users to share experiences with friends and family while on a FaceTime call. For example, users can chat with each other while having a viewing party, listening to an album with a friend, or completing a fitness challenge together from wherever they are, and SharePlay keeps all of these activities in sync across everyone on FaceTime.

SharePlay sessions offer shared playback controls, so anyone on the FaceTime call can play, pause, or jump ahead while enjoying synced media. With dynamic volume controls, audio from the streaming content will automatically lower when a FaceTime participant is speaking, making it easy to continue the conversation with friends despite a loud scene or climactic chorus. When users prefer to have uninterrupted sound, they can simply tap on the Messages button in the FaceTime controls to jump to a shared thread and keep the conversation going. Each participant in the SharePlay session streams directly from the relevant app on their own device, delivering high-fidelity audio and video. Apple TV supports SharePlay so users can watch shared shows or movies on the big screen while using their personal device to continue connecting with friends over FaceTime.

SharePlay is available with Apple TV+, Apple Music, Apple Fitness+, and some of the most popular apps in the App Store. For more on this, read the full Apple press release