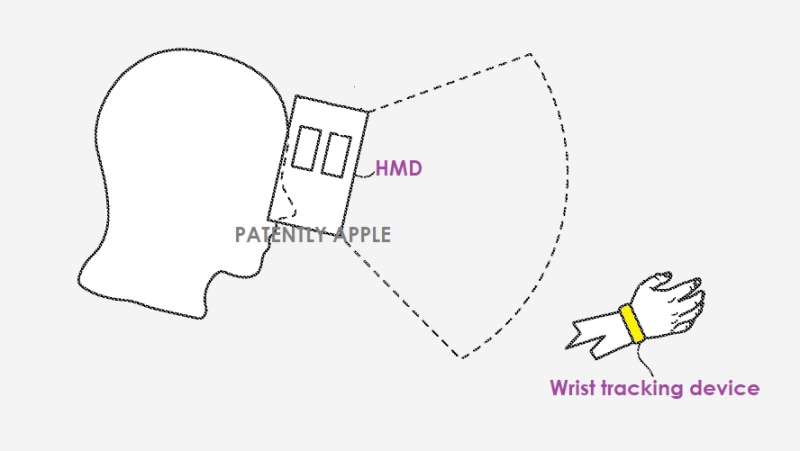 Today the U.S. Patent and Trademark Office officially granted Apple a patent that relates to tracking devices worn by a user, and, more particularly, to wrist tracking devices for detection by Apple's future head-mountable devices.

Head-mountable devices, such as head-mountable displays, headsets, visors, smartglasses, head-up display, etc., can perform a range of functions that are managed by the components (e.g., sensors, circuitry, and other hardware) included with the wearable device.

Head-mountable devices can be equipped with a wide range of outward and inward facing sensors. These sensors can recognize and track objects, surfaces, and user gestures such as hand and body movements. The functionality of such sensors can be limited by factors such as component cost, device size, device weight, heat generation, available computing power, and/or occlusion due to the device being in a specific location relative to other objects or users.

Head-mountable devices can collect data from and/or relating to a device and make certain determinations that aid the process of displaying a representation (e.g., virtual rendering) to the user. For example, an object can be provided with indicators that allow a head-mountable device to determine both an identity and a characteristic (e.g., position, orientation, distance, etc.) of the object.

Rather than requiring a head-mountable device to directly identify and analyze each hand independently, analysis of a tracking device worn by the user can provide sufficient constraints to determine characteristics of the hands, without requiring that the hands be independently analyzed. With such analysis, the speed and accuracy of object recognition, hand and body tracking, surface mapping, and/or digital reconstruction can be improved. The devices that facilitate such tracking can be worn in a variety or arrangements depending on whether the tracking is to be performed. As such, they can be compactly stored in a manner that allows them to be readily accessible for deployment. 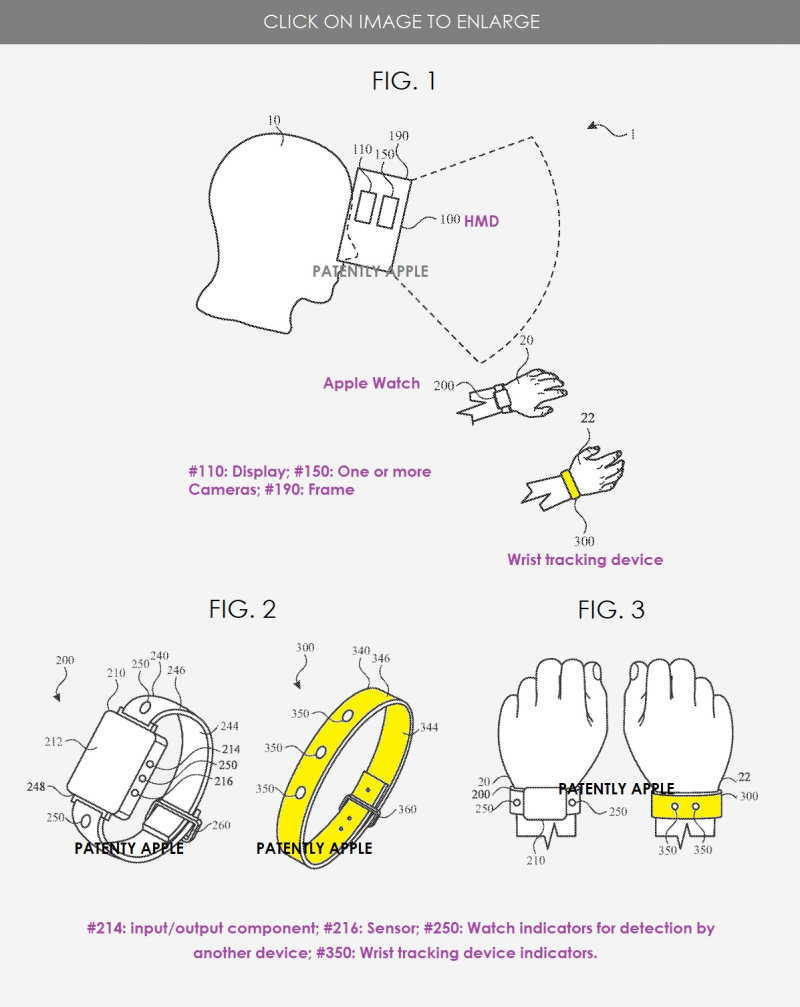 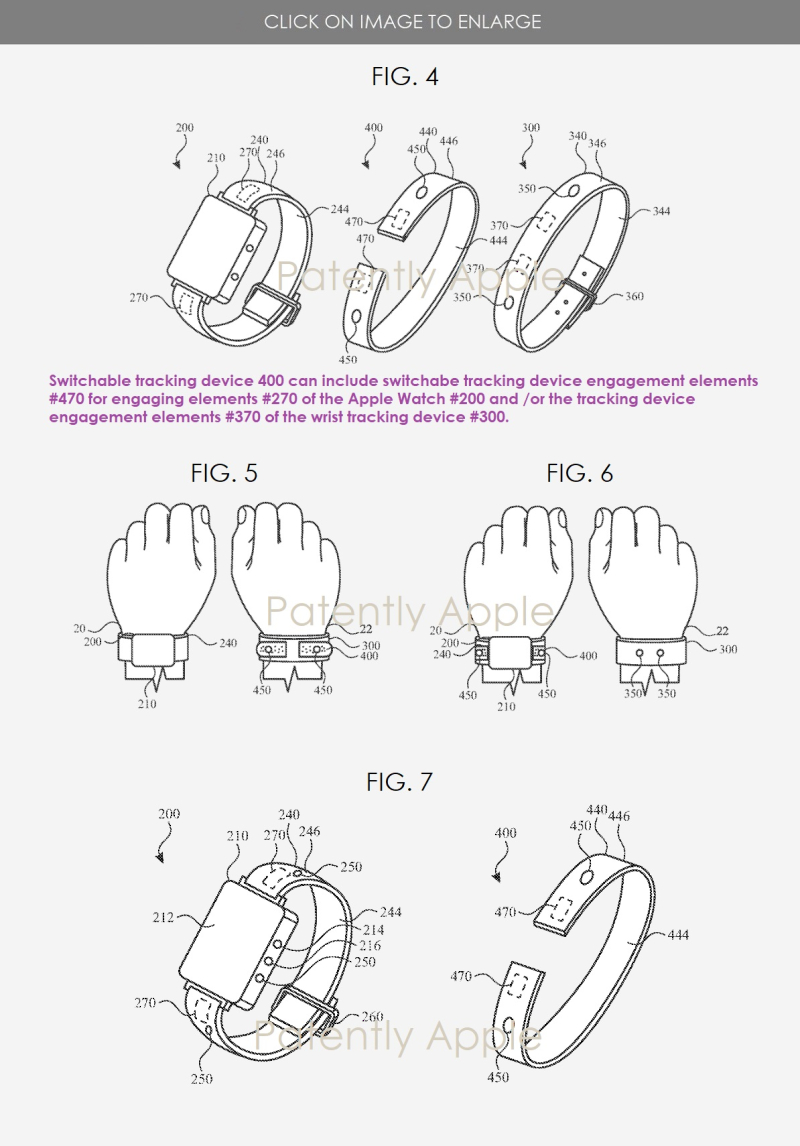 In some embodiments, the switchable tracking device indicators can include light emitters that emit light that is optically detectable by an external device. While one type of indicator is illustrated, it will be recognized that one or more of various kinds of indicators can be employed.

For example, indicators can include emitters, patterns, symbols, text (alpha and/or numeric), images, barcodes (e.g., Universal Product Code), QR codes, and the like. Such indicators may be formed as patterns of contrasting dark (e.g., black) and light (e.g., white) portions.

Apple's patent FIG. 10 below illustrates a block diagram of a system including a head-mountable device, a watch, a switchable tracking device, and a wrist tracking device. 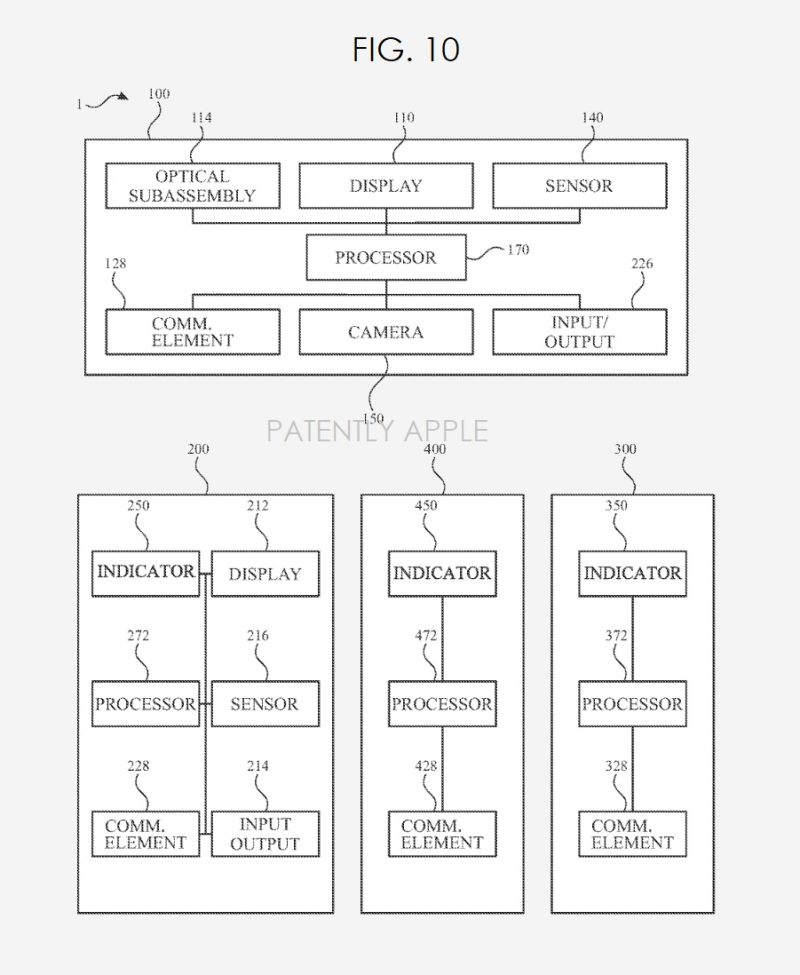