Home Archives Contact Us Subscribe Twitter Facebook Patently Mobile
In Q3-21, India's Smartwatch Market Recorded its highest ever shipments with Apple taking a huge leap with their SE Model
Apple has Won a Patent for a possible future Strobe Light Accessory for iPhone and more 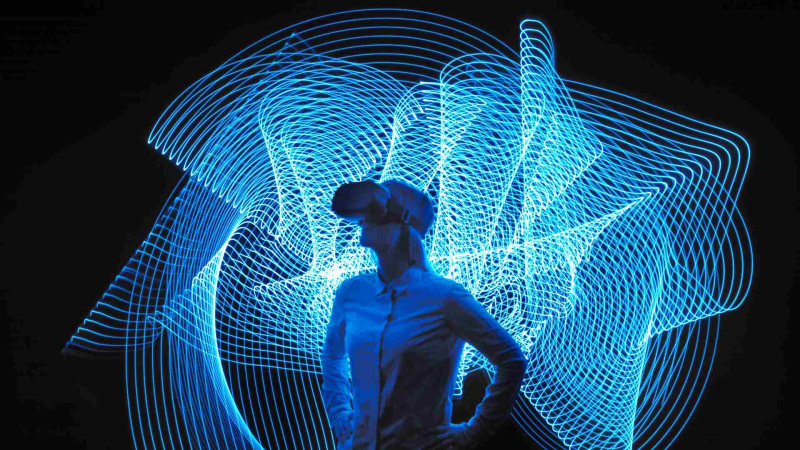 Today the U.S. Patent and Trademark Office officially granted Apple a patent that relates to the field of auralization. More particularly, it relates to techniques for auralization of virtual 3D environments in real-time. Most innovations in AR/VR environments have been centered on virtual 3D environments for gaming. Apple's granted patent covers "auralization" of virtual environments which describes the simulation of sound propagation inside enclosures, where methods of Geometrical Acoustics (GA) may be used for a high-quality synthesis of aural stimuli that mimic certain realistic behaviors of sound waves. Apple is working to advance spatial audio to new dimensions.

Apple notes in their patent background that over the past few decades, Virtual Reality (VR) and Augmented Reality (AR) technologies have emerged to be powerful tools for a wide variety of applications, e.g., in science, design, medicine, gaming and engineering, as well as in more visionary applications such as the creation of "virtual spaces" that aim to simulate the look and sound of their real-world environment counterparts.

However, most of the innovation in recent years has been focused on creating virtual visual renderings (e.g., VR headsets and video gaming systems, and the like). In order to increase the sense of immersion in such virtual environments to be as realistic of a simulation as possible, it is important to consider multiple sensory stimuli beyond just the simulation of visual stimuli, e.g., the simulation of sound stimuli--and even smell and/or touch stimuli.

Analogous to visualization, the so-called "auralization" of virtual environments describes the simulation of sound propagation inside enclosures, where methods of Geometrical Acoustics (GA) may be used for a high-quality synthesis of aural stimuli that mimic certain realistic behaviors of sound waves.

In such simulations, spatial audio signals may be generated that take into account various models of sound wave reflections, as well as models of sound wave reverberations, in three-dimensional environments. Such spatial audio may be generated, e.g., using Digital Audio Workstation (DAW) software or the like, and may be used for various applications, such as room planning and/or musical or architectural sound simulations.

Current implementations of spatial audio synthesis software can often manage the computational load of simulating moving sound sources around a moving receiver in real-time, however, these simulations are often based on a static reverberation. In a real-world scenario, however, there is significant interaction between sound waves and reflective/obstructive surfaces, e.g., when entering or exiting a room. Moreover, various portals in a room (e.g., doors, windows, roofs) may be dynamically opening and/or closing as a user (or virtual user) navigates a real-world (or virtual) environment listening to synthesized audio signals. Each of these changes in a room's architecture or scene composition can have a significant impact on the way that sound waves in the room should be simulated at any given instant in real-time.

In this way, there is a need for improved techniques for the physically accurate auralization of virtual 3D environments in real-time. This includes environments wherein any (or all) of: the sound sources, the sound receiver, and the geometry/surfaces in the virtual environment may be dynamically changing as the sound sources are being simulated. Such techniques may also be applied in Augmented Reality (AR) scenarios, e.g., wherein additional sound information is added to a listener's real-world environment to accurately simulate the presence of a "virtual" sound source that is not actually present in the listener's real-world environment; mixed reality scenarios; sound visualization applications; room planning; and/or 3D sound mixing applications.

Apple's granted patent covers techniques that may be utilized to determine a more accurate, e.g., "acoustically-effective" room volume. In particular, for certain 3D room models, it is hard to determine the room volume. This is especially true for convoluted spaces, holes (e.g., open windows) or even "half-open" spaces (e.g., stadiums).

According to other embodiments, techniques may be utilized to perform optimized acoustical ray tracing. Fast and optimized ray tracing algorithms already exist in the graphics/optics field, but current acoustic adaptions either lack performance or physical accuracy. Thus, by considering acoustical wave propagation and the psychoacoustic characteristics of human listeners, the improved ray tracing processes described are adapted to the problem of sound (e.g., rather than light) propagation. The improved ray tracer has increased suitability for acoustic purposes and boosts the performance at the same time.

According to still other embodiments, techniques may be utilized to translate simulated ray tracing results into natural-sounding reverberations that more-accurately account for the laws of physics.

By contrast, the improved techniques described define a transformation that is used to derive a spatial-time-frequency energy probability density function (PDF) during ray tracing that more accurately accounts for the laws of physics, and then convert this data into a spatial impulse response (SIR) function, which may then be used for realistic 3D audio reproduction, e.g., either via headphones or loudspeakers.

Apple's patent FIG. 1 below illustrates an exemplary acoustic room model and the corresponding specification of the room model; FIG. 6 is an exemplary visualization of room acoustics for a virtual 3D environment. 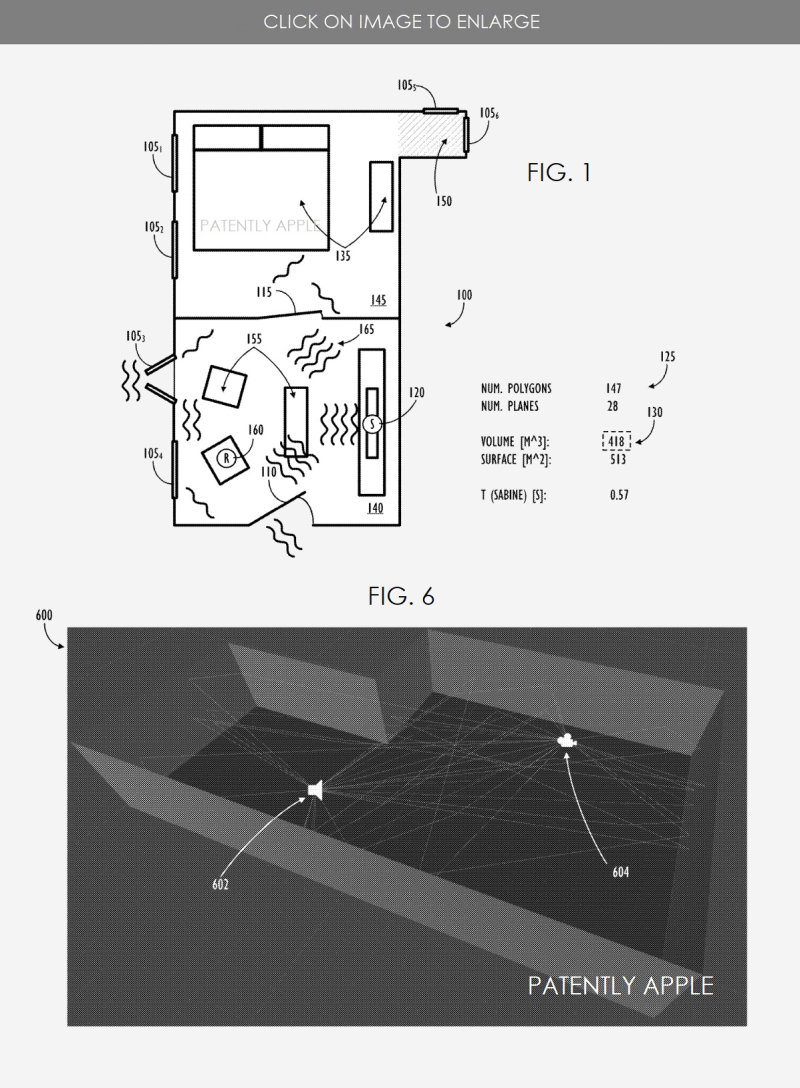 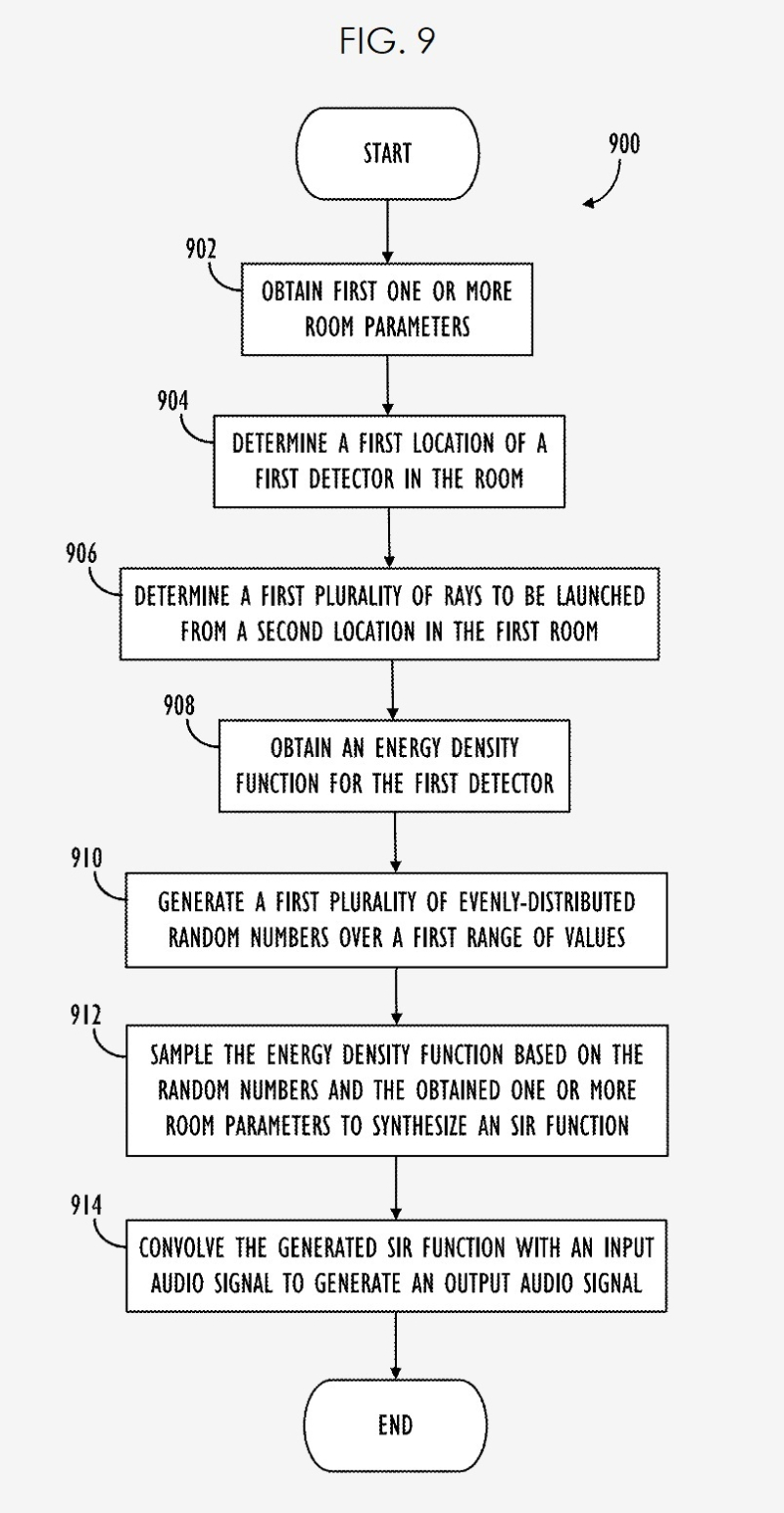