Home Archives Contact Us Subscribe Twitter Facebook Patently Mobile
Apple became the #1 Brand in China in October for the first time since December 2015
A Rumor Report from Mark Gurman claims that Apple is continuing to work on a Wireless Charging Pad, Reverse Charging and more 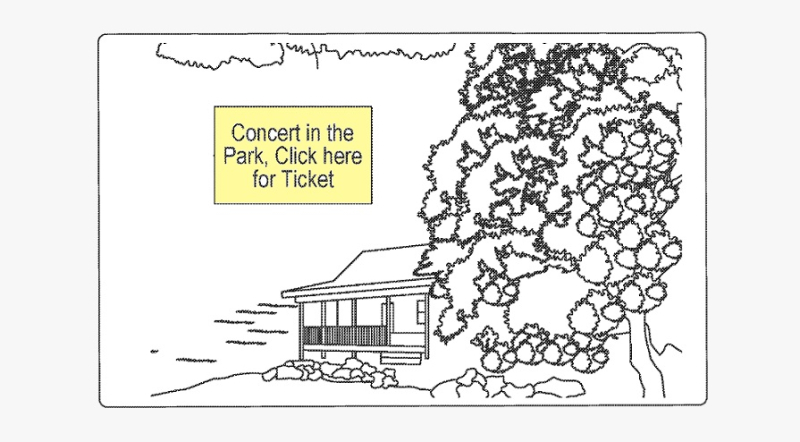 UPDATE; 8:47 a.m. - A secondary AR patent has been added to the report that offers a unique Sci-Fi dimension to it.

Yesterday Patently Apple posted a report titled "An Apple patent reveals an AR Interface feature for Headsets & Glasses that will allow users to control external devices with in-air gestures." The patent related to AR interfaces, and more specifically, to techniques for controlling external devices like a TV using a next generation augmented reality interface included with mixed reality headsets and glasses that work with in-air gestures as noted in our report's cover graphic. One of the key inventors of this patent was Michael Kuhn, Apple's software development manager that came to Apple via the acquisition of Germany's Metaio in 2015.

On Thursday, the US Patent & Trademark Office published a second patent application from Apple that originally came from Metaio, this time with the one-time owner of Metaio Peter Georg Meier, who is now Apple's Director, Algorithm Lead, Technology Development Group. One of the reasons for acquiring Metaio was for their advanced work in Virtual Reality (AR/VR/MR) and hologram technologies.

Hologram technology is touched on in this patent. In patent point #0024 it's noted that "a system may have a projection system that projects virtual objects into the physical environment, for example, as a hologram or on a physical surface, so that a person, using the system, perceives the virtual objects superimposed over the physical environment." Think of a virtual TV projected on any wall in your home. More on that later.

One of Metaio's great inventions that Apple has acquired relates to "Thermal Touch" which is a vision of the near future for wearable computing user interfaces. By fusing information from an infrared and standard camera, nearly any surface can be transformed into a touch screen.

Whether Apple will rebrand this technology when their MR Headset arrives is unknown at this time.

In one exemplary technique, image data corresponding to the physical environment are obtained using one or more cameras. At least one portion of an entity in the physical environment is identified based on the image data. Based on the identified at least one portion of the entity, whether the entity is an entity of a first type is determined. One or more virtual objects and a representation of the entity are displayed. 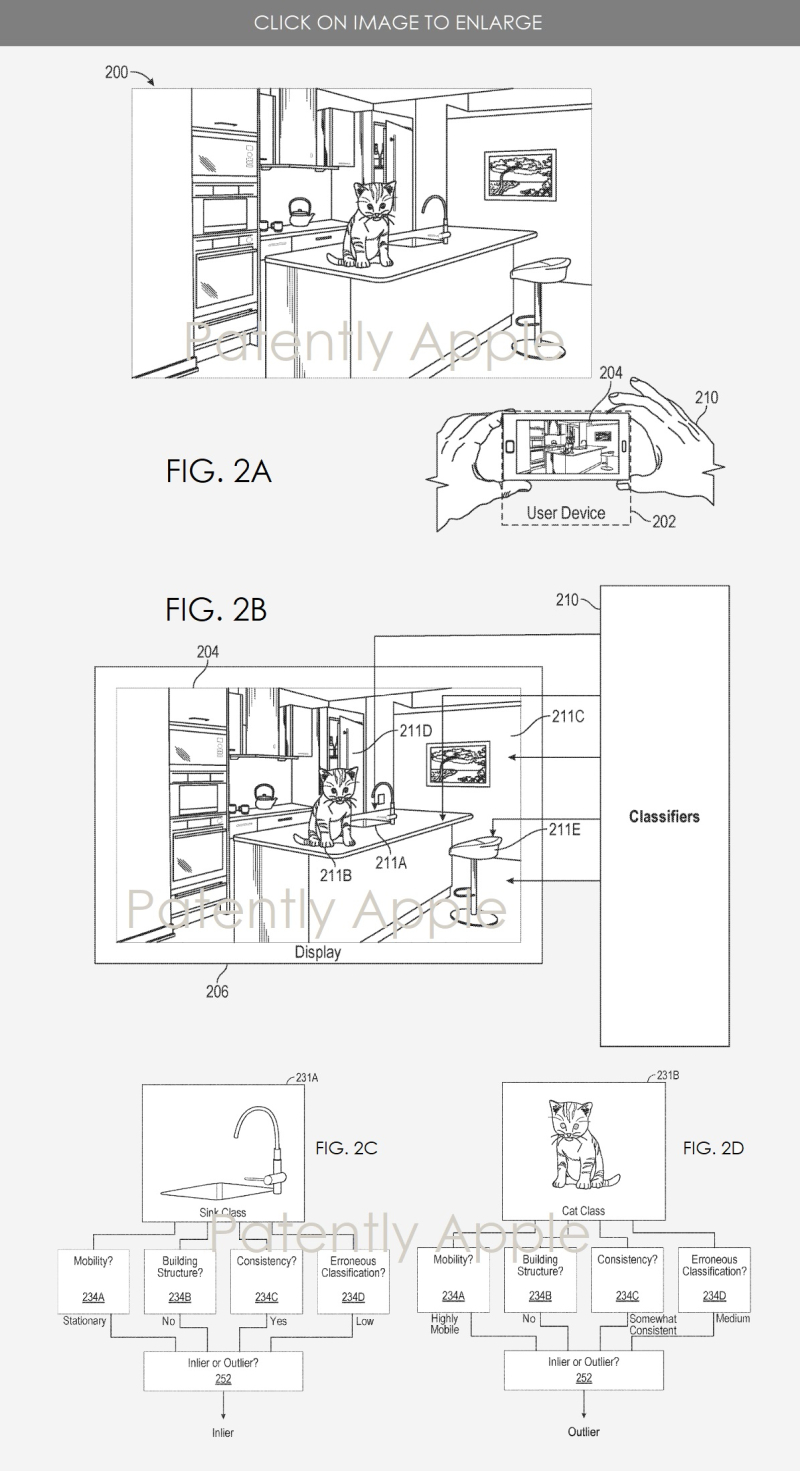 Apple's patent FIGS. 2C and 2D above depict various flows for classifying identified entities and determining the type of the classified entity. Here we're able to see that everything in that photo scene taken by an iPhone with its TrueDepth camera can add AR information about the sink, the cat, the appliances and so forth. 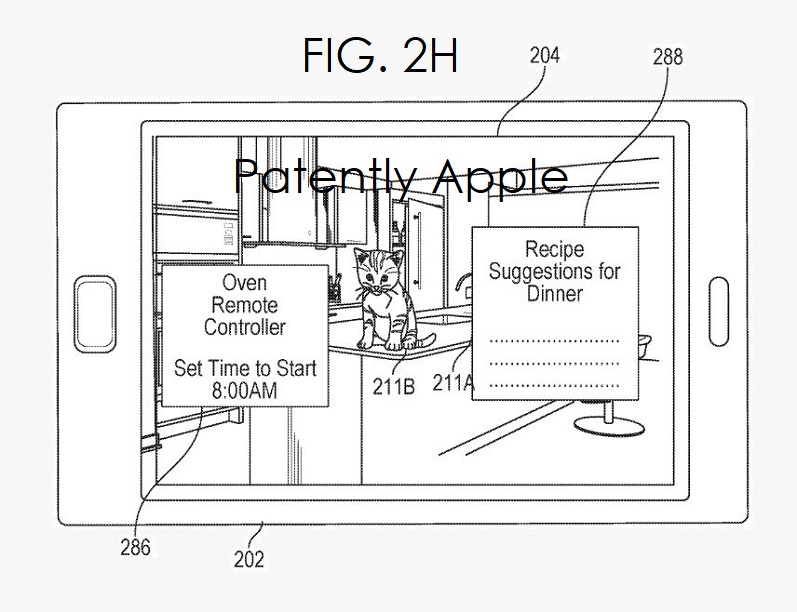 Each room of the house can be set to an augmented reality world. When in the kitchen, the user will be able to ask Siri to call up a recipe to follow and it will pop-up in the users view inside a head-mounted device (HMD).

Further, the headset could work with an augmented reality TV guide service or TV subscription service can be provided regardless of whether the TV entity is located in a bedroom or a living room.

Other scenarios are discussed in the patent filing, such as one relating to outdoor environments. Apple's patent FIG. 3E below depicts a user device displaying a computer-generated reality interface including virtual objects and representations of identified entities. 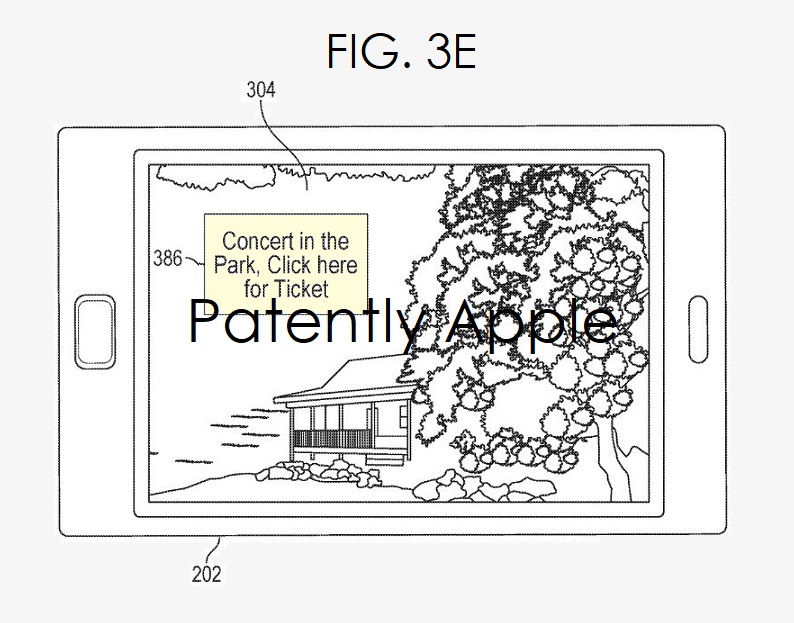 A user may be walking in a park when a message could pop up to notify the user that a concert is coming to the park based on GPS sensors and enable the user to order tickets for a particular concert in the park.

Apple's patent application number 20210365686 continues to advance this invention by adding 24 new patent claims to better protect this invention from competitors and patent trolls. You could review the patent in full here.

Th patent highlighted today along with the one that we reported on yesterday provides a glimpse at some of the AR interface attributes that could be coming our way in the not-too-distant future.

The U.S. Patent Office also published AR patent application 20210364809 from Apple on Thursday titled "Augmented Visual Capabilities." You could review it here. The invention carries a sci-fi quality to it that could be interesting in the future. 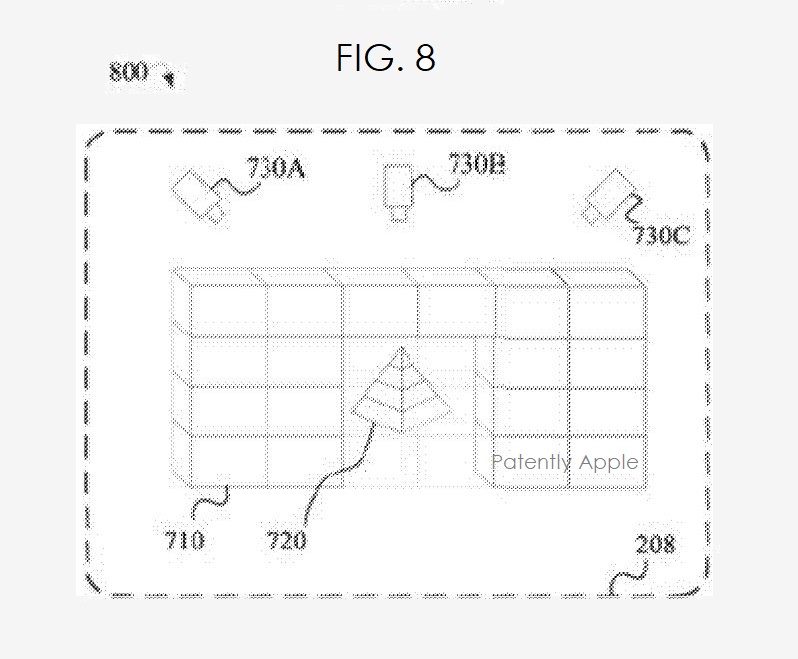