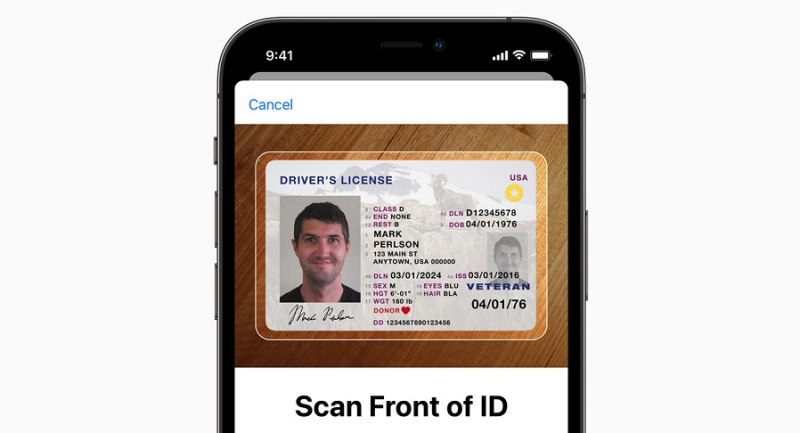 Apple is making U.S. states foot part of the bill and provide customer support for its plan to turn iPhones into digital identification cards, according to confidential documents obtained by CNBC.

CNBC reports that Apple is requiring "states to maintain the systems needed to issue and service credentials, hire project managers to respond to Apple inquiries, prominently market the new feature and push for its adoption with other government agencies, all at taxpayer expense, according to contracts signed by four states.

Apple announced in June that its users could soon store state-issued identification cards in the iPhone’s Wallet app, billing it as a more secure and convenient way for customers to provide credentials in a variety of in-person and remote settings. The feature, when combined with Apple’s biometric security measures like Face ID, could cut down on fraud." Several Apple patents covered this future feature (01, 02 & 03)

Below is a Patently Apple snippet about Apple driver’s licenses and state IDs in Apple Wallet presented by Jennifer Bailey, VP, Wallet and Apple Pay at WWDC 21.

The CNBC report further notes that "the move has brought questions from industry observers about why local authorities are ceding control of citizens’ identities to a $2.46 trillion private corporation. Beyond that, the integration of identity into powerful mobile devices has drawn concern from privacy experts about the risk of dystopian scenarios involving surveillance.

The contracts between Cupertino, California-based Apple and states including Georgia, Arizona, Kentucky and Oklahoma provide a rare glimpse into the dealings of the powerful company. Apple is known for its obsession with secrecy. It typically forces potential partners to sign non-disclosure agreements to prevent its documents from spilling into public view.

The 7-page memorandum of agreement, obtained through public record requests from CNBC and other sources, mostly portrays Apple as having a high degree of control over the government agencies responsible for issuing identification cards.

Apple is asking states to comply with security requirements laid out by the International Organization for Standardization describing mobile driver licenses. Apple said in September it played an active role in the standard’s development. For more details, read the full CNBC report by Hugh Son and Kif Leswing.