Home Archives Contact Us Subscribe Twitter MeWe Facebook Patently Mobile
A Geeky Video shows an attempt at creating a workable iPhone with a USB Type-C Port and it's not the first attempt at this either
Anti-Monopoly groups sent a letter to U.S. House Leaders to assist them in rebutting Big Tech's argument that Antitrust bills hurt Consumer Security

While the EU Parliament wants to Crush Silicon Valley's Big Tech, the legislation that could make it happen has hit a brick wall of Opposition 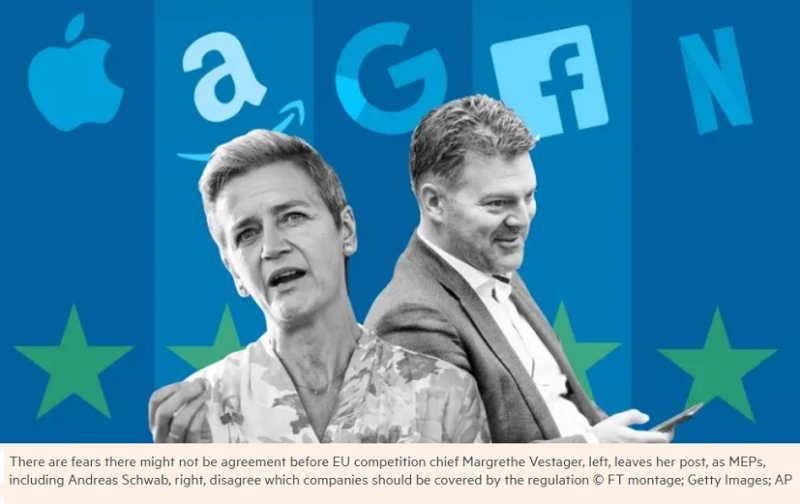 Since December 2020 until now, Patently Apple has posted at least five reports on the EU's Digital Markets Act (DMA) that is out to damage the top Silicon Valley giants like Apple, Amazon, Google and Facebook (01, 02, 03, 04 and 05). France's President Macron made it clear that Europe wants to replace the top 10 U.S. tech companies with European equivalents. It would appear that the EU would like to stop US company influence in Europe and fine the companies exorbitant amounts so as to finance this European transformation.

Last month Google told a European Court that the staggering US$5 billion antitrust fine was flawed. They urging Europe's second-highest court to scrap or reduce what it said was not an appropriate penalty.

European anger against Google, for instance, was highlighted in a new Netflix series titled "The Billion Dollar Code." Quick overview: "In 1990s Berlin, an artist and a hacker invented a new way to see the world. Years later, they reunite to sue Google for patent infringement on it. The European start-up claimed that a key Google executive that came from Silicon Graphics ripped off their work and patent to create Google Earth.

The series is geared to one conclusion, that Google's one time motto of "Don't be Evil" was the exact opposite of how they ripped off this European start-up. You couldn't watch the German series (dubbed in English) without concluding that Google crushed this start-up without blinking. How many Apple fans felt way with Eric Schmidt sitting on Apple's board and using his insider knowledge to bring Android to market in a surprise to Steve Jobs?

Yet with that said, many companies like Europe's Spotify and America's Epic Games feel like Apple works against them to repress their innovations and more.  Europe believes, and to a certain extent, Congress believes, that gatekeepers like Google and Apple are harming innovation.

Today, the Financial Times wrote a report titled "Fighting in Brussels bogs down plans to regulate Big Tech." The report describes how the European Parliament is attempting to fast track both the Digital Markets Act (DMA) and the Digital Services Act (DSA), though in reality, the two bills are being both bogged down and watered down by a determined opposition. They now fear that the legislation has a chance of failing before the EU’s competition and digital policy chief, Margrethe Vestager, leaves her post in three years.

Evelyne Gebhardt, a German MEP, said in exasperation during last month’s debate that "It sounded like we had agreed but that is not the case . . . at all. We are a long way from having a common position on this."

Another person directly involved in the parliamentary debate stated that the slow progress also gives Big Tech more time to fully capture key sectors of the economy. "If we wait too long some markets will not be able to be repaired any more. This is about protecting small companies in Europe. We need to get this done as soon as possible."

The European Parliament lawmaker Andreas Schwab, which is leading the file for the EU body, stated in his report that "The DMA should be clearly targeted to those platforms that play an unquestionable role as gatekeepers due to their size and their impact on the internal market."

The Reuter's report back in June further noted that "Schwab also proposed beefing up a list of don’ts set out by the Commission, among them a halt to tech giants to favoring their own services on their platforms or harvesting data from their platforms to compete with their business users."

The Reuters' report made it very clear that Schwab and the EU were targeting draft rules aimed at reining in the power of Apple, Facebook, Google and Amazon that should be the only targets.

Today's Financial Times report added that "the Socialists & Democrats (S&D), the second-largest political group in the European parliament, want to include other types of digital services, such as video streaming, music streaming, mobile payments and cloud services.

The Dutch MEP Paul Tang stated that "If we only go after five companies this won’t fix the problem. companies worth more than €50bn should be regulated, a threshold that would also capture the Netherlands-based Booking.com, Germany’s SAP and Airbnb."

Tang added: "I fear new gatekeepers will rise instantly once you have dealt with Google and the rest. We need the legislation to be future proof, We have waited more than 20 years to reform the rules of the internet and so we will need to make it strong enough for the upcoming 20 years."

Yet another person involved in the debate stated that the impasse will not be easily solved. "Everyone has a hard position and nobody is willing to move and compromise." For more details, read the full Financial Times report, here.