Is the glass half-empty or half-full? There were media outlets, like Bloomberg, who made a big deal about the loss of Apple executive Doug Field to Ford. The executive was working on Apple's electric car special project known as Project Titan. Yet Apple scored a major win in February when it was discovered that they snagged Dr. Manfred Harrer from Porsche with a longstanding history of chassis development. Then in June it was made public that Apple had hired Ulrich Kranz, a former senior executive at BMW AG’s electric car division to help lead its own vehicle efforts.

Again in September, Apple hired Dr. Anton Uselmann for Project Titan with over a decade of experience with Mercedes and Porsche in the development of steering systems. With these high-end hires, Project Titan has a much deeper bench than one single engineer returning to Ford. To me, Apple's Project Titan is not in any turmoil, but rather in good hands.

With that said, Apple was granted yet another patent this week for a "Multi-Stage active suspension actuator."

In Apple's patent background they note that conventional vehicle suspension systems are passive systems having a spring and a damper that transfer and damp forces between the sprung mass (e.g., vehicle body) and the unsprung mass (e.g., tires, wheels, brakes, etc.). Handling characteristics of the vehicle and passenger comfort may be improved with an active suspension system that selectively controls force transfer to the vehicle body.

The primary actuators are for selectively applying force between the sprung mass and one of the unsprung masses.

The hydraulic actuator mechanism is for selectively applying force between the sprung mass and the one of the unsprung masses in parallel with the primary actuator.

The fluid circuit includes a pump in fluidic communication with the hydraulic actuator mechanism of two of the suspension actuators to control displacement thereof. 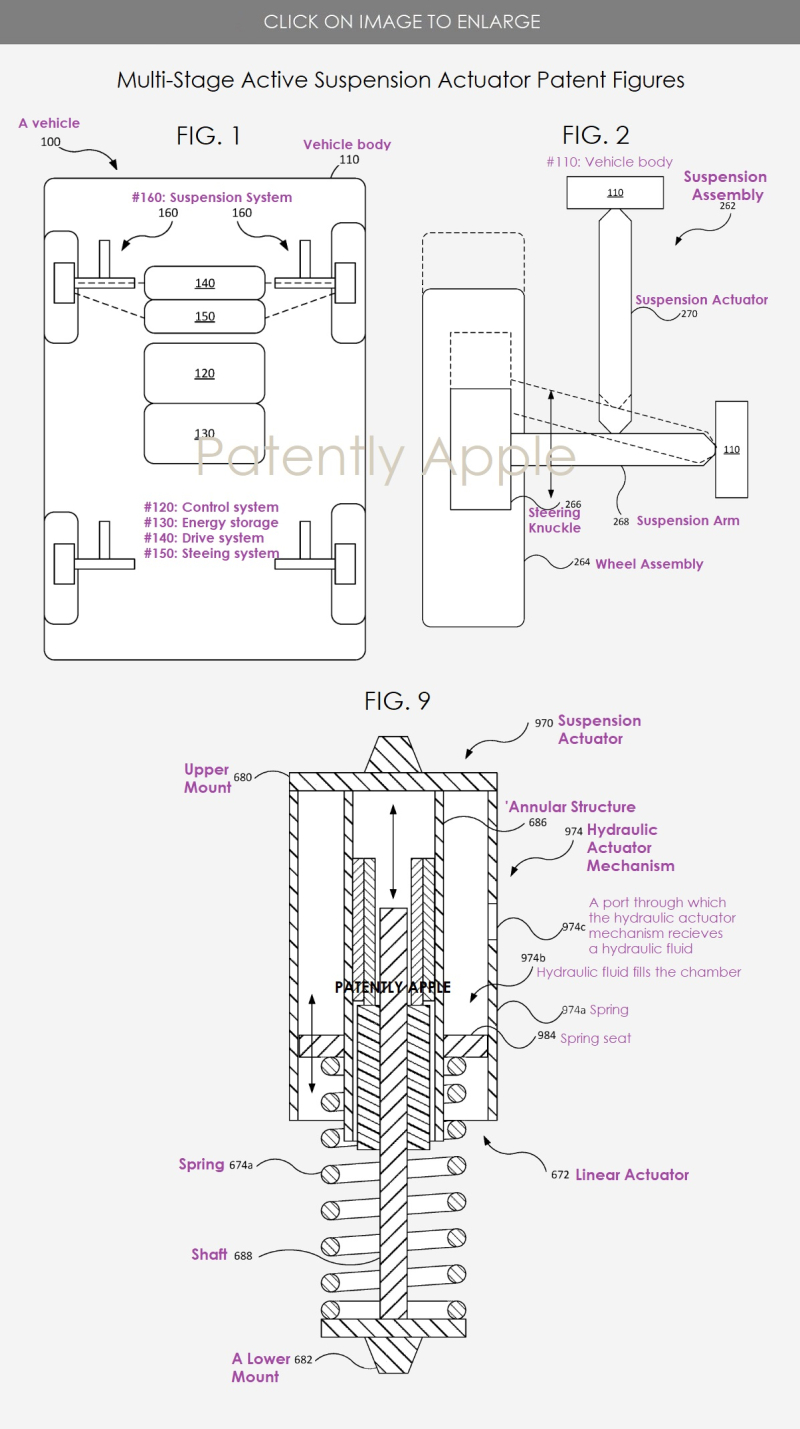 Apple's patent FIG. 9 above is a cross-sectional view of another embodiment of a suspension actuator for use in the suspension assembly of FIG. 1. This is the patent FIG. Apple highlighted as a key figure for this invention.

As one could appreciate, this is a very detailed patent filing that those in the electric car industry would better understand than us mere mortals. You could check out the details of granted patent 11,124,035 here.