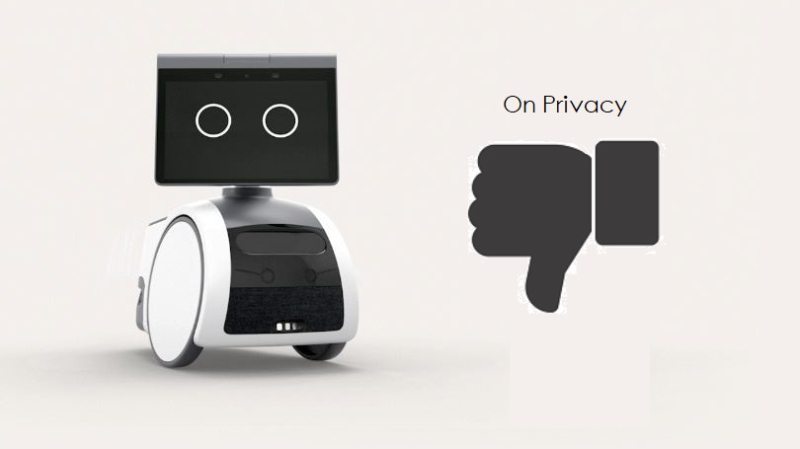 Yesterday afternoon Patently Apple posted a report titled "At Amazon's Product Event 2021 they introduced "Astro," an In-Home Robot, the new Echo Show 15, a Projector Device called Amazon Glow+." The new Astro robot was only introduced yesterday and Motherboard (Tech by Vice) instantly hit Amazon's with a negative report about the robot that could be a privacy issue nightmare.

Motherboard reports that Amazon's new robot called Astro is designed to track the behavior of everyone in your home to help it perform its surveillance and helper duties, according to leaked internal development documents and video recordings of Astro software development meetings obtained by Motherboard. The system's person recognition system is heavily flawed, according to two sources who worked on the project.

The documents, which largely use Astro's internal codename "Vesta" for the device, give extensive insight into the robot's design, Amazon's philosophy, how the device tracks customer behavior as well as flow charts of how it determines who a "stranger" is and whether it should take any sort of "investigation activity" against them.

In its announcement video, Amazon says Astro is designed to give "peace of mind" to its owners. First and foremost, Astro is a surveillance device that tracks you and everyone who enters your home. When a user purchases the $999 robot, customers are asked to "enroll" their face and voice, as well as the faces and voices of anyone who is likely to be in a home, so Astro can learn who is supposed to be there.

One of the internal documentation files presented in a development meeting and obtained by Motherboard describes how Astro patrols an owner's home and tries to identify people it encounters. Other files refer to "Sentry," the components and software that control the device's security features. Sentry software includes integration with Ring cameras and Alexa Guard, Amazon's home security service.

The meeting document spells out the process in a much blunter way than Amazon's cutesy marketing suggests.

"Vesta slowly and intelligently patrols the home when unfamiliar person are around, moving from scan point to scan point (the best location and pose in any given space to look around) looking and listening for unusual activity," one of the files reads. "Vesta moves to a predetermined scan point and pose to scan any given room, looking past and over obstacles in its way. Vesta completes one complete patrol when it completes scanning all the scan point on the floorplan."

At a later point in the report they quote a source who worked on the project who mentioned privacy and navigation as chief concerns. "As for my personal opinions on the device, it's a disaster that's not ready for release," they said. "They break themselves and will almost certainly fall down stairs in real world users' homes. In addition it's also (in my opinion) a privacy nightmare that is an indictment of our society and how we trade privacy for convenience with devices like Vesta."

The source also corroborated that Astro's facial recognition abilities perform poorly, which is concerning for a device designed mainly to follow people around and determine if they're a stranger or not.

If you're interested in this subject matter, then be sure to check out the full Motherboard report that takes a deep dive on Amazon's new in-home robot Astro (Vesta) that you may find interesting – considering it's a privacy issue.