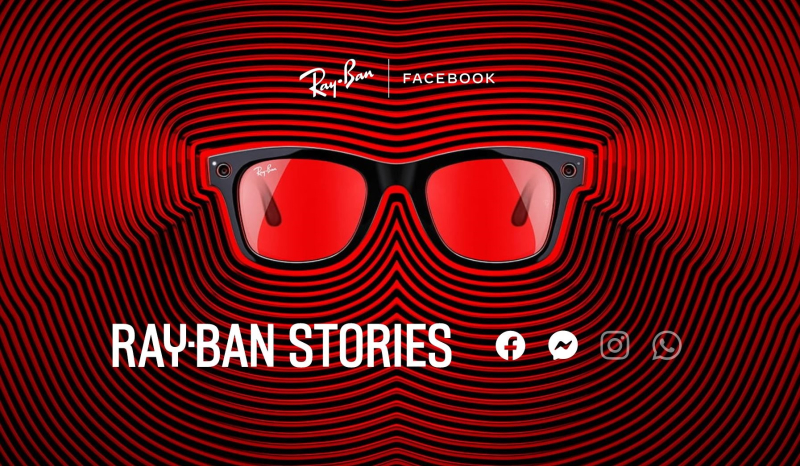 One of the big issues that Google Glass faced back in 2013 was the perception by the public that their privacy could be invaded by those wearing this first generation device. Many Google Glass wearers were accosted on this single issue and one of the stones that dragged sales to a complete halt. Eight years later and the issue is being raised again about the new Ray-Ban/Facebook smartglasses.

On Friday, both the Irish DPC and Italian Data Protection Regulator (the Garante) expressed concern regarding the new Facebook/Ray-Ban smartglasses that could capture videos and photos of individuals without their knowing.

The press release stated that "While it is accepted that many devices including smartphones can record third party individuals, it is generally the case that the camera or the phone is visible as the device by which recording is happening, thereby putting those captured in the recordings on notice. With the glasses, there is a very small indicator light that comes on when recording is occurring. It has not been demonstrated to the DPC and Garante that comprehensive testing in the field was done by Facebook or Ray-Ban to ensure the indicator LED light is an effective means of giving notice.

Accordingly, the DPC and Garante are now calling on Facebook Ireland to confirm and demonstrate that the LED indicator light is effective for its purpose and to run an information campaign to alert the public as to how this new consumer product may give rise to less obvious recording of their images."

Yet Facebook is on all European watchdog lists and so their glasses are now under the spotlight.

Apple's engineers are quite aware that cameras on their future Head-Mounted Devices (HMDs) could be an issue and filed a patent that could possibly address the issue. Our June IP report was titled "Apple Invents an HMD to work with a camera accessory that will make the public aware that the user is recording video & more."

Apple noted in their filing that "When a user is taking a photo or video with a smartphone, bystanders know when a camera is aimed at them and they could cover their face or tell the smartphone owner to stop the filming. Yet with HMDs, "there is no clear physical motion that would indicate whether or not the user may be currently recording video." So, there's "a need for recording indicators for HMDs that cannot be easily defeated so that persons can be aware that they are being recorded."

Later Apple's filing noted that "The presence of the modular accessory on the HMD would serve to indicate to persons in the environment that they may be recorded."

Apple's patent FIG. 9B below illustrates a recording indicator that includes a ring of light elements around the camera lens that generate light pulses in an encrypted pattern. 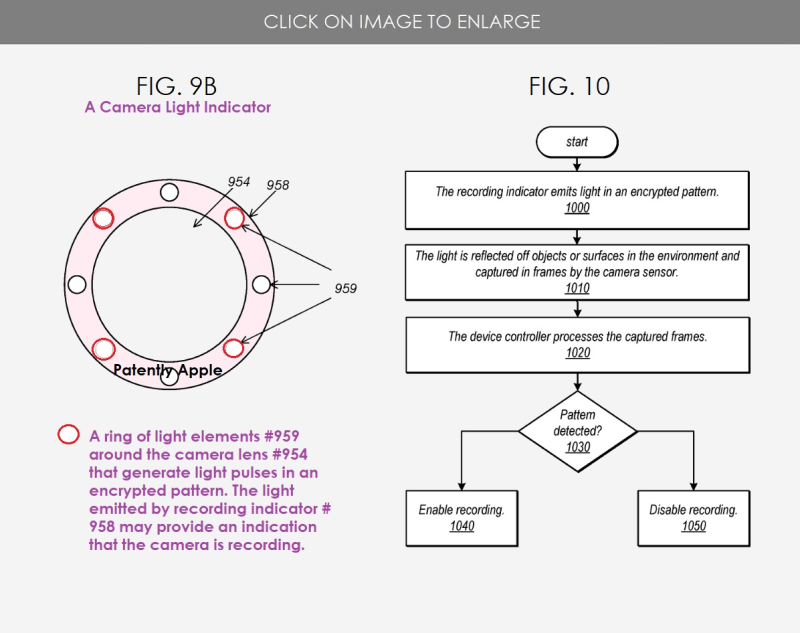 While the Apple patent doesn't cover an audio alert of any kind, that should be considered as well so as to alert the public a camera is about to begin filming. A flashing light alone may not be sufficient notice.

Eight years after Google Glass, privacy with cameras on smartglasses and other headset devices remains an issue that won't go away.

Lastly, our report had also noted that in 2016, "The 5 Point Café made its intentions clear with a post on its Facebook page that stated: 'For the record, The 5 Point is the first Seattle business to ban in advance Google Glasses.'"

This issue could resurface with Facebook's smartglasses at some point in time with certain public establishments setting new privacy rules to ensure that the privacy of their patrons in the future are secured. In the short run we'll have to wait and see how Europe's regulators address this issue in the coming months ahead.