Another week and another Project Titan related granted patent was published by the U.S. Patent and Trademark Office for Apple relating to their medium to long term research into developing an Electric vehicle known as Project Titan. This latest patent win covers a next-gen system designed to block blinding sunlight or nearby vehicle lights from distracting a driver. This next-gen safety feature will darken areas of a vehicle's windows and mirrors to block blinding light and could one-day replace the traditional yet archaic sun visor system.

Apple notes in their patent background that today's automobiles have a rear mirror and left and right-side mirrors. Ambient light such as sunlight and light from headlights can reflect off of the mirrors and into the eyes of a driver. A driver may also be exposed to sunlight, light from oncoming headlights, and other sources of glare through the windshield of a vehicle. Sunshades and window tinting may be used to reduce glare somewhat, but can be cumbersome and ineffective.

Apple's Project Titan patent provides solutions to this problem. The solution includes a control circuit may gather eye location information indicating where the eyes of the driver are located using a sensor such as a camera mounted in the vehicle and may gather information on where an external object that produces glare such as the sun, a reflective portion of a vehicle (e.g., a shiny bumper or rear window on a vehicle on a roadway), a street lamp, or other source of glare is located outside of the vehicle and the direction in which the external (exterior) object is projecting light towards the vehicle (e.g., towards the eyes of a driver or other vehicle occupant). Based on this information, the control circuit may direct a light modulator on a window or vehicle mirror to selectively darken an area that prevents the glare from reaching the eyes of the driver.

The light modulator may be patterned to form a series of strips, rectangular regions, or areas of other shapes that extend along the upper edge of the front window of a vehicle and that therefore allow the light modulator to serve as an electrically adjustable sun shade.

A light modulator may also be incorporated into other windows in a vehicle to reduce glare from headlights, the sun, and other light sources. Vehicle mirrors that are provided with light modulators can be adjusted to selectively darken a portion of the mirror that would otherwise reflect glare into the eyes of the driver.

Apple's patent FIG. 6 below is a top view of an illustrative sensor such as an image sensor system based on a stereo camera of the type that may be used to gather eye location information. 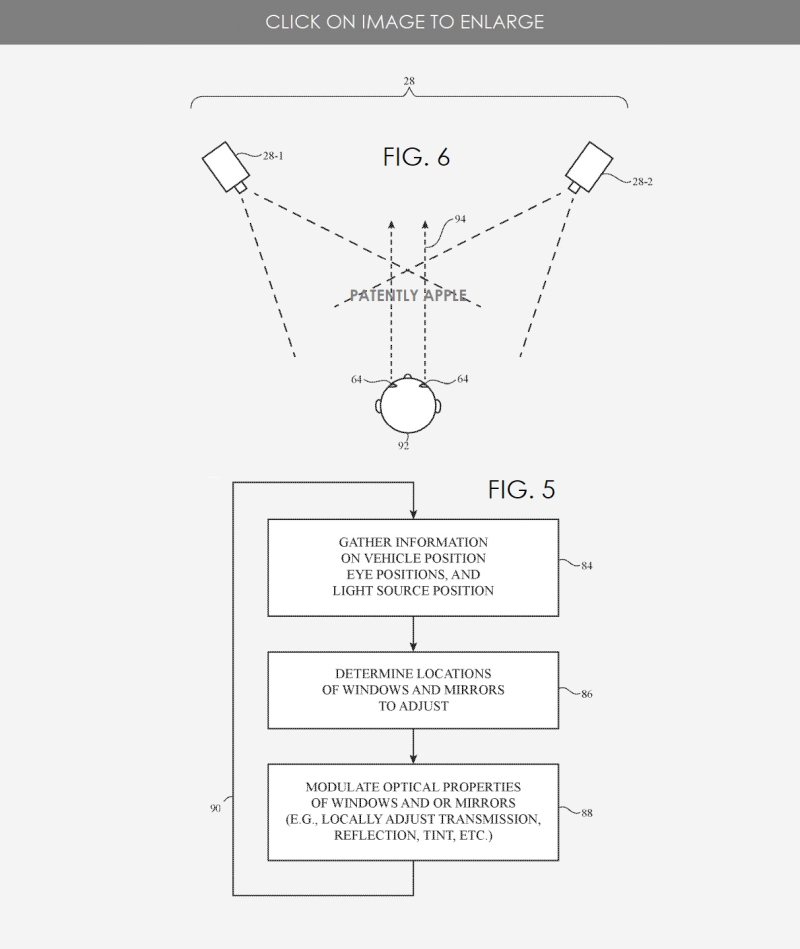 Apple's patent FIG. 5 above is a flow chart of illustrative steps involved in using a light modulator to reduce glare in a vehicle. 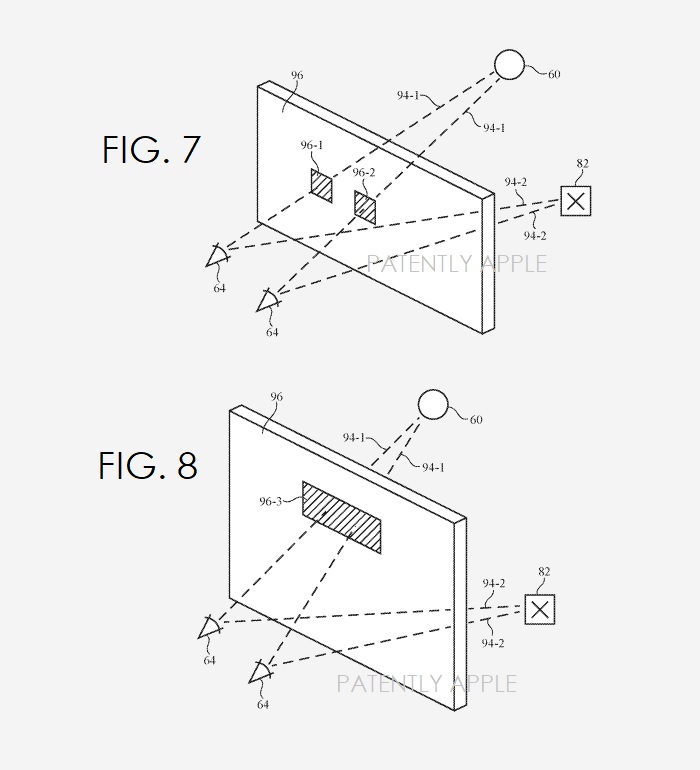