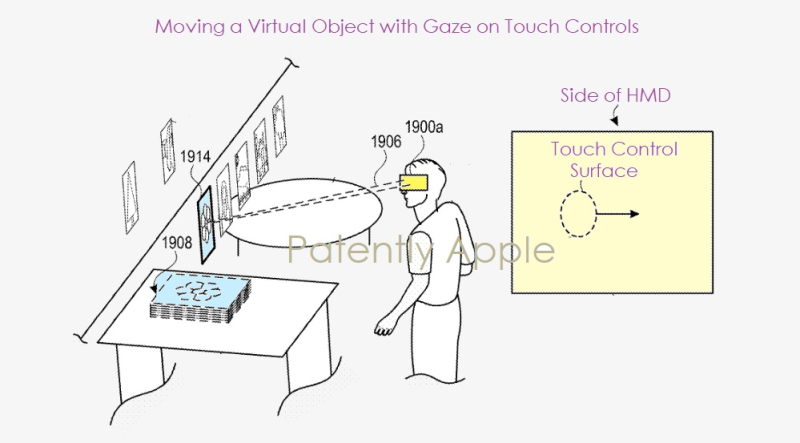 Today the U.S. Patent and Trademark Office officially granted Apple a patent that relates to user interfaces for interacting with their future HMD that will use a combination of eye gaze and touch controls along with hand and body gestures and even Siri.

More specifically, Apple's granted patent covers techniques for interacting with a Head Mounted Device (HMD) using eye gaze. A user use will be able to use their eyes to interact with user interface objects displayed on the HMD display. The techniques provide a more natural and efficient interface by, in some exemplary embodiments, allowing a user to operate the device using primarily eye gazes and eye gestures (e.g., eye movement, blinks, and stares).

The HMD includes sensor(s) configured to detect various types of user inputs, including (but not limited to) eye gestures, hand and body gestures, and voice inputs. In some embodiments, input device includes a controller configured to receive button inputs (e.g., up, down, left, right, enter, etc.).

In Apple's patent FIG. 19C below, we see that the user (#200) can more easily select a particular photo from stack (#1908). In FIG. 19C, photos #1908a-1908e are moved from the table (#1912) and presented upright and spread out in the middle of the field of view of the user. In response to receiving user input (#1910a), the photo (#1908a) in the far-left position is designated (e.g., tentatively selected). The designation of photo is indicated by the focus indicator (#1914), which includes a bold border around photo 1908a. In some embodiments, the focus indicator includes a pointer, cursor, dot, sphere, highlighting, outline, or ghost image that visually identifies the designated object. In some embodiments, HMD device #1900 un-designates photo #1908a and returns photos #1908 to the table in response to receiving further input (e.g., selection of an exit button or liftoff of a touch). 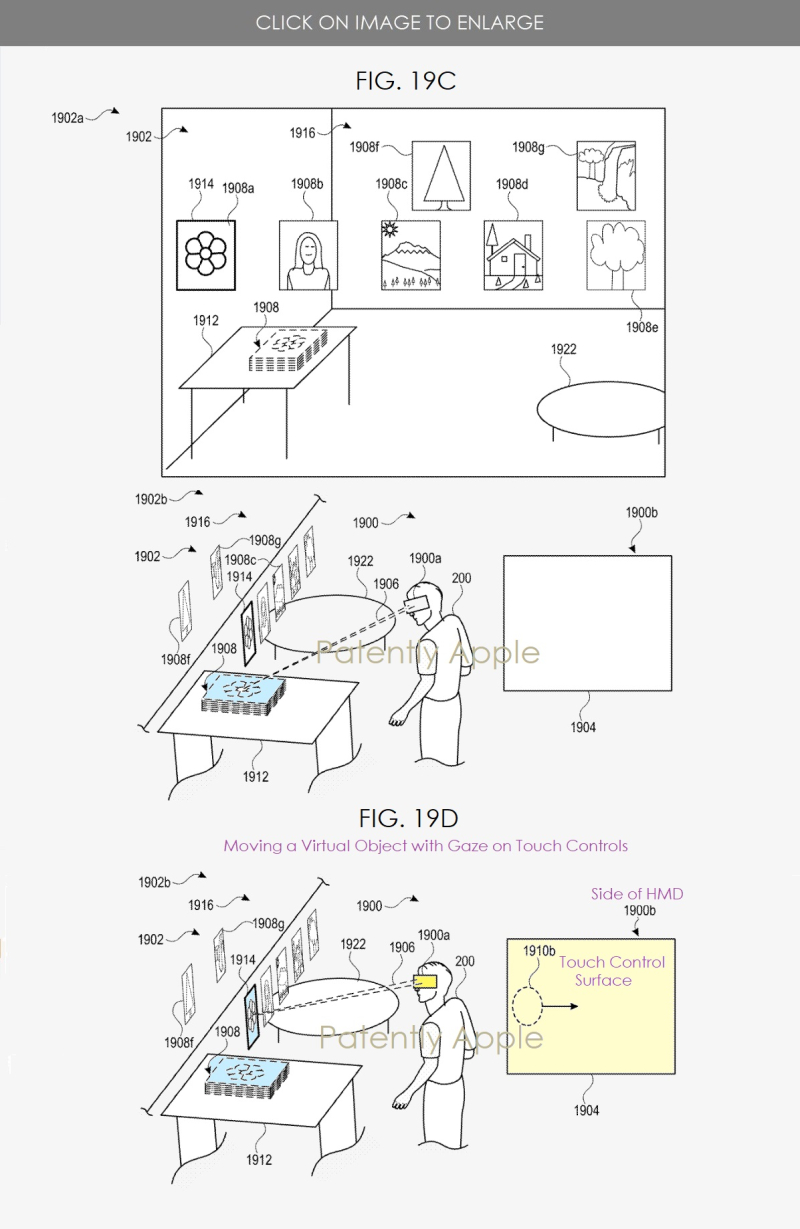 In the patent figures below Apple illustrates how using gaze and touch controls will be used to move items within a virtual environment like paintings/photos and even a coffee mug object. 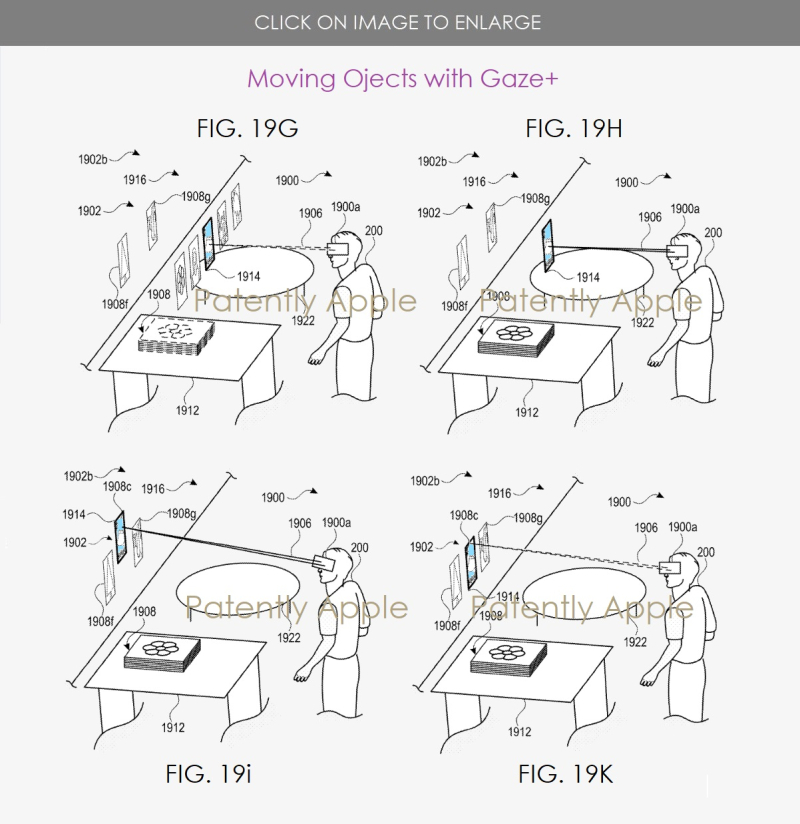 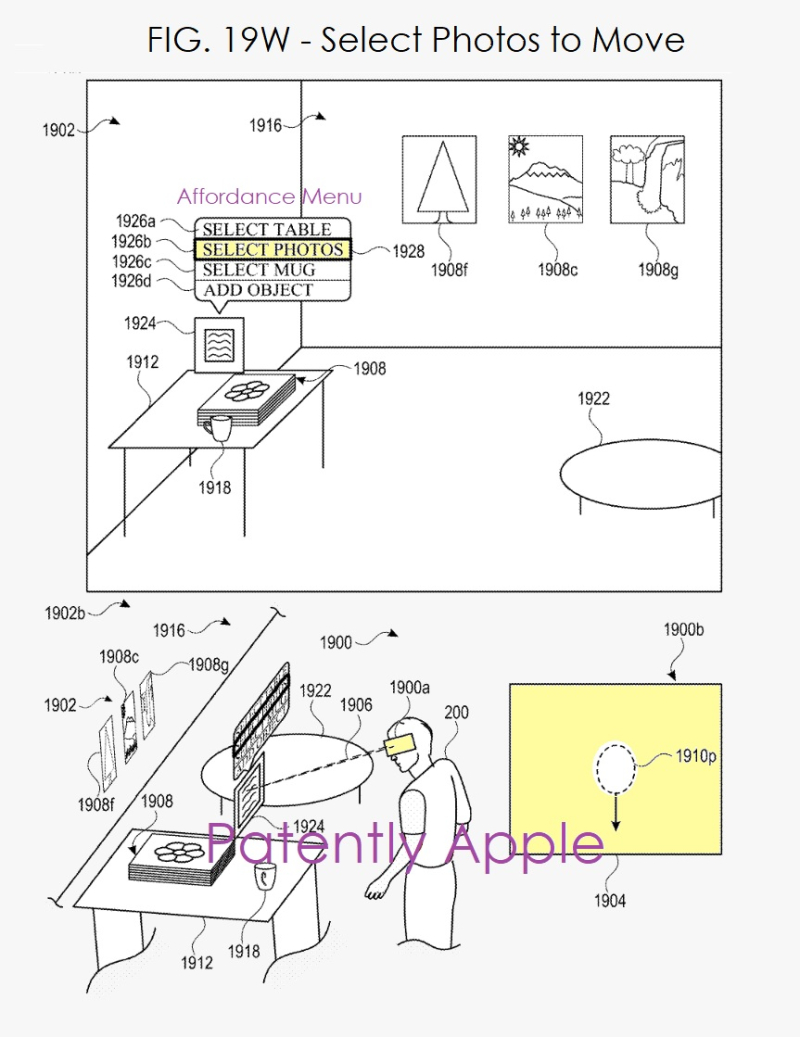 Image sensor(s) also optionally include one or more depth sensor(s) configured to detect the distance of physical objects from the HMD system. In some embodiments, the HMD uses CCD sensors, event cameras, and depth sensors in combination to detect the physical environment around the HMD.

While the patent is primarily focused on a future Mixed Reality (MR) headset, the described techniques could also be applied to conventional user interfaces on devices such as desktop computers, laptops, tablets, and smartphones.