Home Archives Contact Us Subscribe Twitter MeWe Facebook Patently Mobile
Xiaomi Rockets to Second Place Globally in Q2-2021 with Revenue up 64% while Vivo is now the leader in Smartphones in China
If you're not a Fan of the iPhone's Camera Notch, wait until you see Apple's latest invention to address this issue

While iPhone owners are Loyal to most of Apple's mobile devices, almost 60% don't own a Mac 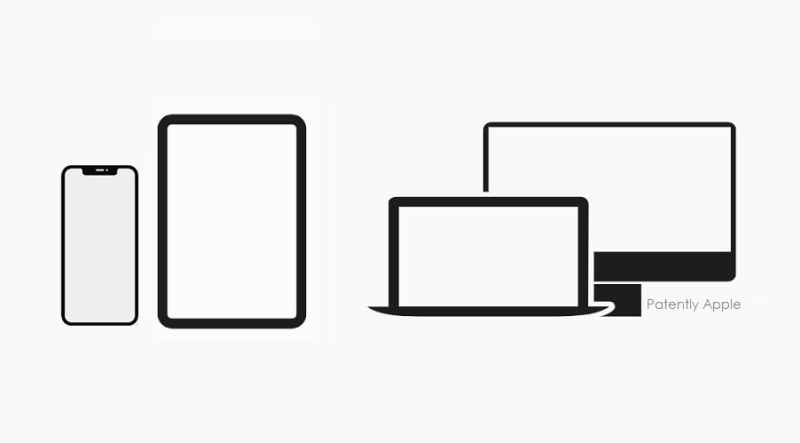 It's common knowledge that Apple has long sought to cross-sell its entire product line to its core customers. Almost twenty years ago, it introduced the iPod to Mac desktop and laptop customers as its first serious product outside of a personal computer. Since then, Apple has promoted a long list of consumer electronics to its existing base of users, with a wide range of hits and misses.

CIRP assessed the current state of this effort and finds current results have varied considerably. Obviously, iPhone has assumed the gateway role, so we looked at the other devices that recent iPhone buyers own. We analyzed what electronics iPhone buyers own generally, and what Apple products these buyers own. We surveyed approximately 900 Apple consumers in the US that bought an iPhone in the twelve months ending in June 2021.

Yet, despite its early success in selling desktop personal computers to consumers, it appears Apple’s efforts to sell devices for home use has not gone nearly as well. While almost all iPhone buyers own a personal computer, relatively fewer own Apple Macs.

We analyzed the device ownership of US Apple customers that purchased an iPhone in the twelve months ending with the June 2021 quarter. We analyzed these devices:

While Apple sells a wide range of branded electronics and accessories, ranging from iPhone cases to the entire Beats line of audio equipment, these six represent the most significant products in the Other Products category that Apple reports.

Almost all iPhone buyers own a personal computer, either desktops or laptops (90%). The next most common are tablet devices (79%) and streaming TV devices (69%) as per the chart below. 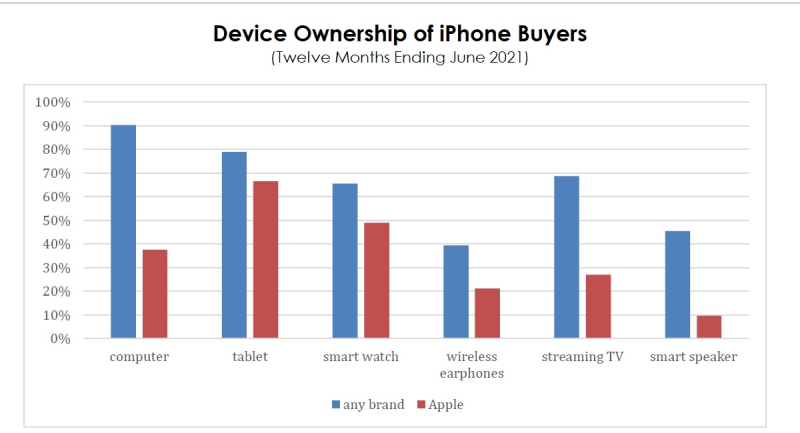 In comparison, Apple essentially created the tablet category. After more than 10 years, iPhone buyers own a tablet almost as often as they own a personal computer. With iPad’s defining position in this category, it follows that Apple has gained significant penetration into the iPhone customer base, with 84% of iPhone buyers with a tablet owning an iPad.

About two-thirds of iPhone buyers own a smartwatch, and three-quarters of those smartwatch owners have an Apple Watch. This represents almost the same market share as iPads. When it introduced Apple Watch, Apple had several smaller competitors, mostly fitness trackers such as Fitbit and Garmin, with limited smartphone integration. Apple Watch has become a useful accessory, with sophisticated health tracking technology, and many of the same communications capabilities as an iPhone.

AirPods have also gained traction among iPhone buyers. Almost 40% of iPhone buyers own a wireless Bluetooth earbud set, and AirPods account for more than half of them.

For more on accessories and Home Devices (Apple TV and HomePod), read the full CIRP report.

By 2023 all Macs should be using Apple's blistering fast M-Series processors with improved GPU performance. The performance of next-gen Macs may very well turn the tide on the statistics presented in today's report by CIRP. Of course only time will tell.

As a side note, it wouldn't hurt for Apple to add a wider variety of ports on their Macs while introducing a reinvented mouse that could compete with Logitech and other leading brands.